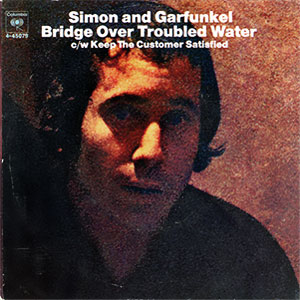 This song's recording process exposed many of the underlying tensions that eventually led to the breakup of the group after the album's completion. Most notably, has repeatedly expressed regret that he allowed to sing this song as a solo, as it focused attention on Garfunkel and relegated Simon to a backing position. Art Garfunkel initially did not want to sing lead vocal, feeling it was not right for him. "He felt I should have done it," Paul Simon revealed to "" in 1972. Garfunkel said that the moment when he performed it in in 1972 was "almost biblical". In recent performances on the "Old Friends" tour, Simon and Garfunkel have taken turns singing alternate verses of the vocal.

As the song ends, drums and piano build in a crescendo to an extraordinary climax. The last note, on a , is a long, drawn out E-flat that lasts ten seconds.

Simon wrote the song in the summer of 1969 while Garfunkel was filming "Catch-22" in Mexico. It was written on the guitar in the key of G although on an early demo version Paul Simon detuned the song on his guitar to an F.

The song originally had two verses and different lyrics. Simon specifically wrote it for Garfunkel and knew it would be a piano song. He based the lyrics on the line "I'll be your bridge over deep water if you trust in me" by in the song "Oh Mary Don't You Weep For Me".

spent four days working on the piano arrangement. Art came up with the intermediate piano chords between the verses while working with Knechtel.

It won the and Song of the Year in the , with its album also winning several awards in the same year.

"Bridge over Troubled Water" has been rerecorded by a number of artists since its original release in 1970: