Big Bertha (howitzer)
For other uses of the term, see Big Bertha (disambiguation). 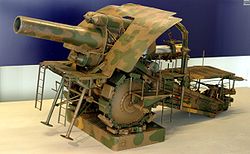 Model of the road-mobile "M-Gerät" (M-device) version. The model can be seen at the Paris Army Museum

Big Bertha (German: Dicke Bertha; literal translation "Thick (or fat) Bertha") is the name of a type of super-heavy howitzer developed by the famous armaments manufacturer Krupp in Germany on the eve of World War I. Its official designation was the L/12 (i.e., the barrel was 12 calibre in length) 42-cm (16.5 inch) Type M-Gerät 14 (M-Equipment 1914) Kurze Marine-Kanone ('short naval gun', a name intended to camouflage the weapon's real purpose).[2][3]

The howitzer was mainly designed by Krupp's Director of design, Professor Fritz Rausenberger, and his predecessor, Director Dräger. Many sources say that Bertha is a reference to Bertha Krupp, heiress and owner of the Krupp industrial empire.[2] However, not all accept this connection.[4] During the war, the Germans gave numerous other nicknames to the M-Device.[4] ('Dicke', meaning fat or big in German, is apparently not a reference to the physical aspect of Ms Krupp.[5]) The name "Big Bertha" subsequently came to be applied generically by the Allies to any very large German gun, such as the railway-mounted battleship guns known as "Langer Max" and the ultra-long range "Paris Gun." Strictly speaking, however, Dicke Bertha, or Big Bertha, is only applicable to the 42-cm M-Gerät howitzer.[6][4] The term should not, again strictly speaking, even be applied to the 42-cm Gamma-Gerät howitzer, which was the forerunner of the Bertha.[4]

It had its genesis in the lessons learned by the Germans (and Austrians) from the Russo-Japanese War of 1904-05. During the war, the Japanese had dismounted a number of their coastal defence 28-cm howitzers and used them to help break their siege of the fortified Russian naval base at Port Arthur. This was a complete novelty as, until that time, it had been assumed by military experts that the largest transportable siege guns were around 20-cm in calibre. Nevertheless, most Europeans completely failed to draw the lessons the Japanese had taught - apart from, as mentioned, the Germans and Austrians (the latter also developed a series of road-mobile superheavy guns, including the 30.5-cm Schlanke Emma howitzer, the 38-cm Barbara and Gudrun howitzers, and their own 42-cm howitzer).[7]

During the early 1900s, therefore, Krupp began to develop a series of road-mobile heavy mortars and howitzers, ranging from 28-cm calibre to 30.5-cm. These, in turn, built upon Krupp's experience with building coastal defence mortars (Küstenmörser), such as the 30.5-cm Beta-Gerät, the first model of which had been introduced in 1897 (though other nations, including Britain and the United States, also built similar weapons).[6]

A new version of the 30.5-cm Beta-Gerät howitzer, vastly superior to the 1897 model, was developed in 1908, but finding it wanting in offensive power, the APK (Artillerieprüfungskommission, or 'artillery testing committee') asked Krupp to build a larger gun capable of smashing modern fortifications. Krupp first investigated the possibility of building a 35-cm weapon, but instead jumped to 42-cm as this was the smallest shell that could carry the large bursting charge required to fulfil the APK's requirements. The first 42-cm design was the massive L/16 (that is to say, the barrel was 16 calibres in length) Gamma-Gerät howitzer, which was basically a scaled-up version of the Beta-Gerät.[6] Unusually for Krupp, both the Beta and Gamma weapons eschewed the usual sliding-wedge breech block in favour of a screw-type breech, after the practice common in Britain and France.

Gamma fired shells weighing up to 1,160-kg. It weighed 150 tons, and was what the Germans called a Bettungsgeschütz, or "bedding gun," i.e. it was mounted on a stationary carriage which was emplaced in a concrete foundation, which took days to prepare. It had to be transported in sections on ten railway wagons (six for the gun itself and another for the bedding).

Moving Gamma and preparing it to fire required significant resources.[citation needed] Consequently, the APK asked Krupp for a more mobile version, and ordered one gun on 15 July 1912.[6] Even before it was delivered (in December 1913), however, the APK went ahead and ordered a second sample in February 1913. The first howitzer was demonstrated to Kaiser Wilhelm II in March 1914, who was greatly taken by the new weapon, and the second was delivered in June 1914.[6]

The new howitzer was a road-mobile weapon mounted on a two-wheeled field type carriage of conventional, if massive, construction. It was a completely different weapon from the Gamma-Gerät. The barrel was shorter than Gamma's by 4 calibres length, and reverted to the conventional Krupp sliding-wedge breech. With thinner walls, the barrel was of generally lighter construction than Gamma's and fired lighter shells of around 830 kg. Fully assembled it weighed 43 tons, much less than Gamma, and did not have to be emplaced in concrete. Special steel 'mats' were developed, onto which the wheels were driven, with a steel aiming arc at the rear of the carriage which allowed limited traverse (this aiming arc was fitted with a massive 'spade' which was buried in the ground and which helped anchor the weapon). To prevent the weapon bogging down in muddy roads the wheels were equipped with Radgürteln, pedrail bands with feet which spread the load. Krupp and Daimler developed a tractor for the Bertha, though Podeus motorploughs were also used to tow the guns, which were broken down into five loads when on the road.[6] 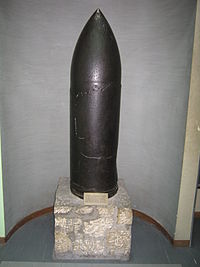 Only two operational M-Geräte were available at the beginning of World War I, although two additional barrels and cradles had apparently been produced by that time.[1] The two operational M-Geräte formed the Kurze Marine Kanone Batterie (KMK) No. 3; the 42 cm contingent contained four additional Gamma Geräte organized in two batteries, and one more Gamma became operational two weeks into the war as "half-battery".[4] They were used to destroy the Belgian forts at Liège, Namur, and Antwerp, and the French fort at Maubeuge, as well as other forts in northern France. Bertha proved very effective against older constructions such as the Belgian forts designed in the 1880s by Brialmont, destroying several in a few days.[6] The first shot in anger of an M-Gërat was fired against Fort Pontisse on the outskirts of Liege on August 12.[8] The most spectacular success was against the nearby Fort Loncin which exploded after taking a direct hit to its ammunition magazine. The concrete used in the Belgian forts was of poor quality, however, and consisted of layers of concrete only, with no steel reinforcement.[6]

Big Bertha gained a strong reputation on both sides of the lines due to its early impressive successes in smashing the forts at Liege. The German press went wild with enthusiasm and declared the Bertha a Wunderwaffe.[6] When used later during the German assault upon Verdun in February, 1916, however, it proved less effective, as the newer construction of this fort, consisting of concrete reinforced with steel, could mostly withstand the large semi-armour-piercing shells of the Berthas. Only Fort Vaux was severely damaged during this event, destroying the water storage and leading to the surrender of the fort.

A total of 12 complete M-Gërat were built; besides the two available when the war started, 10 more were built during the war.[1][9] This figure does not include additional barrels; two extra barrels were already available before the war started,[1] and possibly up to 20 barrels were built, though some sources state 18.[3] As the war ground on several Berthas were destroyed when their barrels burst due to faulty ammunition. Later in the Great War, an L/30 30.5-cm barrel was developed and fitted to a number of Bertha carriages in order to provide longer-range, though not quite as heavy fire. These weapons were known as the Schwere Kartaune or Beta-M-Gerät.[6][10]

Two Big Berthas were captured at the end of the war.[3] One was taken to the United States and evaluated at the Aberdeen Proving Ground. The gun was later placed on display at the United States Army Ordnance Museum,[11] and scrapped in the 1950s. The fate of the other is unknown.

Claims that another Bertha survived on Krupp's proving ground at Meppen, and was used again in World War II in the Battle of Sevastopol, are based on a misconception. It was in fact a Gamma-Gerät howitzer which was assembled at Meppen after the Great War from parts scavenged by Krupp,[3] and went on to see action in the Second World War, along with the modern and even larger Mörser Karl and Schwerer Gustav.

A full-scale wooden model was built by Emil Cherubin in 1932. It was displayed in various places in Nazi Germany until 1939. It was also featured on a postcard.[12] Cherubin had served with a Bertha battery during the Great War. Afterwards, he turned his model-making talents to building wooden models for museums, theatres, and other displays. He also built 1/4-scale display models of Bertha and the Paris Gun.