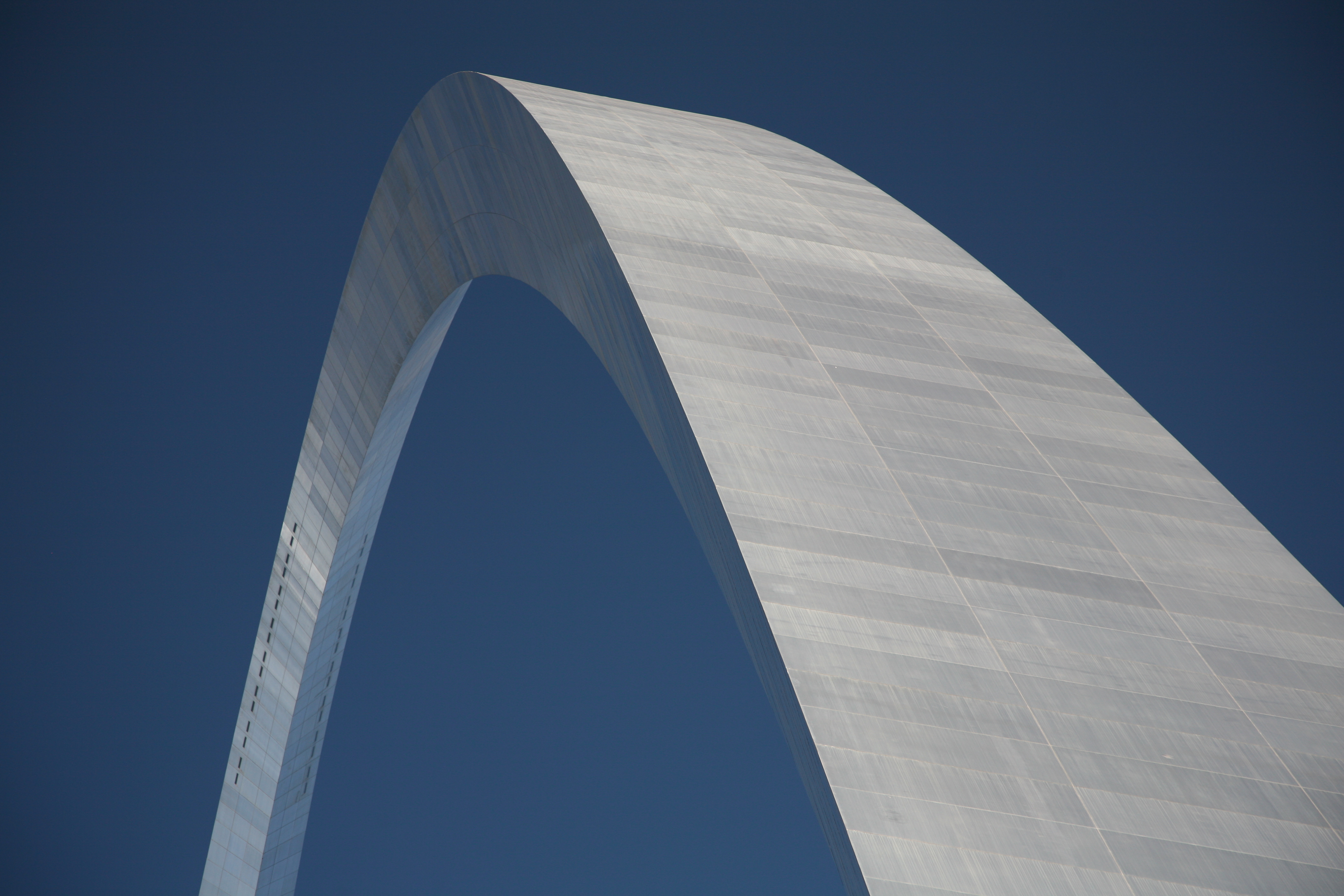 The Gateway Arch, also known as the Gateway to the West, is an integral part of the and the iconic image of . It was designed by Finnish-American architect and structural engineer in 1947. It stands 630 feet (192 m) tall, and is 630 feet (192 m) wide at its base, making it the tallest monument in the United States. Construction of the arch started on , and was completed on , . The monument opened to the public on , .

The cross-sections of its legs are s, narrowing from 54 feet (16.5 m) per side at the base to 17 feet (5.2 m) at the top. Each wall consists of a skin covering from ground level to 300 feet (91 m), with and from 300 feet (91 m) to the peak. The interior of the Arch is hollow and contains a unique transport system leading to an observation deck at the top. The interior of the Arch also contains two emergency stairwells of 1076 steps each, in the event of a need to evacuate the Arch or if a problem develops with the .

The base of each leg at ground level had an of one sixty-fourth of an or the two legs would not meet at the top.

During construction, both legs were built up simultaneously. When the time came to connect both legs together at the apex, thermal expansion of the sunward facing south leg prevented it from aligning precisely with the north leg. This alignment problem was solved when the Saint Louis City Fire Department sprayed the south leg with water from firehoses until it had cooled to the point where it aligned with the north leg.

It is the tallest habitable structure in St. Louis (taller than , the tallest building), and the second tallest in Missouri (behind in Kansas City)).

Eero Saarinen died from a four years before the Arch was completed; prior to his death he had decided to incorporate a power lift system to obviate the need to climb the 1000-plus stairs. But the shape of the arch would have made a standard elevator impossible. After approaching several companies who failed to come up with a viable method, Saarinen hired parking-lot elevator designer Richard Bowser to do the job. Skeptical city leaders gave Bowser only two weeks to submit a design, but he succeeded. By 1968 a unique tram system that combined an elevator cable lift system with ed cars functionally similar to gondolas had been installed.

The tram is operated by the quasi-governmental under an agreement with the NPS.

From the visitor center one may move to either base (one on the north end and the other on the south end) of the Arch and enter the way much as one would enter an ordinary elevator, through narrow double doors. The north queue area includes displays which interpret the design and construction of the Gateway Arch; the south queue area includes displays about the St. Louis riverfront during the mid-19th century.

Passing through the doors, passengers in groups of five enter an egg-shaped compartment containing five seats and a flat floor. Because of the car shape, the compartments have sloped ceilings low enough to force taller riders to lean forward while seated (for this reason it's recommended that the tallest of the five passengers in the car sit in the center seat facing the door). Eight compartments are linked to form a , meaning that both trains have a capacity of 40, and that 80 people can be transported at one time. These compartments individually retain an appropriate level by periodically rotating every 5 degrees, which allows them to maintain the correct orientation while the entire train follows curved tracks up one leg of the arch. The trip to the top of the Arch takes four minutes, and the trip down takes three minutes. The car doors have narrow windows, allowing passengers to see the interior stairways and structure of the Arch during the trip.

Near the top of the arch, the rider exits the compartment and climbs a slight grade to enter the arched observation area. Small windows, almost invisible from the ground, allow views across the and southern with its prominent mounds to the east at , and the City of Saint Louis and St. Louis County to the west beyond the city. On a clear day, one can see up to thirty miles (48 km).

Mathematics of the Arch

The geometric form of the Arch was set by mathematical equations provided to Saarinen by Dr. . and other architects expressed the geometric form in blueprints with this equation: or, equivalently where

This hyperbolic cosine function describes the shape of a . A chain that supports only its own weight forms a catenary; in this configuration, the chain is strictly in tension. [" [http://demonstrations.wolfram.com/JeffersonNationalExpansionMemorial/ Jefferson National Expansion Memorial] " by Sándor Kabai and János Tóth, .] [MathWorld | urlname=Catenary | title= Catenary] An inverted catenary arch that supports only its own weight is strictly in compression, with no shear. The shape is therefore ideal.

Visitors pass through security checkpoints at each entrance to the Arch, before being allowed access to the visitor center. Security was increased as result of a 1997 Congressional mandate to establish a Counter-Terrorism Program at the park. The NPS used the increased funding to purchase magnetometers and x-ray equipment for visitor screening and 25 CCTV cameras scattered throughout the grounds of the memorial. There are also barriers around the grounds, to prevent rogue or possibly bomb-laden vehicles from entering the area.

Eleven light aircraft have been successfully piloted beneath the arch, the first on , when the arch had been completed for less than a year.

In 1980 Kenneth Swyers tried to parachute onto the span of the Gateway Arch, planning to jump back off to land on the ground below. Instead, he slid all the way down one leg to his death. The pilot, Richard Skurat, had his pilot certificate suspended for 90 days.

In 1984, David Adcock of , began to scale the arch by means of s on his hands and feet, but he was talked out of continuing after having climbed only convert|20|ft|m. The next day he successfully scaled the nearby 21-story Equitable Building in downtown St. Louis.

On it was rumored that John C. Vincent of New Orleans successfully scaled the outside of the Arch with suction cups during the night, and performed a BASE jump from the top with a at 7 a.m. No evidence surfaced to support his claim, and it was speculated by Rangers at the Arch that Vincent was lowered from a helicopter onto the top of the Arch, from which he parachuted. He spent three months in jail for the stunt. [ [http://www.stuffmagazine.com/articles/index.aspx?id=288 Jump from Terrifying Heights
Article on Stuffmagazine.com ] ]

On July 21, 2007, several hundred people were trapped in the trams or at the top of the Arch after an electrical problem occurred with the tram system. All were returned to the ground either by being taken down stairs to a service elevator, or by waiting for power to be restored. A second electrical problem caused one tram to be taken out of service the following day.