The Town of the City of Dawson or Dawson City is a town in the Yukon, Canada.

The population was 1,327 at the 2006 census.[1] The area draws some 60,000 visitors each year. The locals generally refer to it simply as 'Dawson', but the tourist industry generally refers to it as 'Dawson City' (partly to differentiate it from Dawson Creek, British Columbia, which is at Mile 0 of the Alaska Highway). 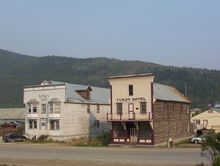 The townsite was founded by Joseph Ladue and named in January 1897 after noted Canadian geologist George M. Dawson, who had explored and mapped the region in 1887. It served as the Yukon's capital from the territory's founding in 1898 until 1952, when the seat was moved to Whitehorse.

Dawson has a much longer history, however, as an important harvest area used for millennia by the Hän-speaking people of the Tr’ondëk Hwëch’in and their forebears. The heart of their homeland was Tr'ochëk, a fishing camp at the confluence of the Klondike River and Yukon River, now a National Historic Site of Canada. This site was also an important summer gathering spot and a base for moose-hunting on the Klondike Valley.

The Klondike Gold Rush started in 1896 and changed the First Nations camp into a thriving city of 40,000 by 1898. By 1899, the gold rush had ended and the town's population plummeted as all but 8,000 people left. When Dawson was incorporated as a city in 1902, the population was under 5,000. St. Paul's Anglican Church built that same year is a National Historic Site.

The population was fairly stable until the 1930s, dropped after World War II when the territorial capital was moved to Whitehorse and languished around the 600-900 mark through the 1960s and 1970s, but has risen and held stable since then. The high price of gold has made modern mining operations profitable, and the growth of the tourism industry has encouraged development of facilities. In the early 1950s, Dawson was linked by road to Alaska, and in fall 1955, with Whitehorse along a road that now forms part of the Klondike Highway. In 1978, another kind of buried treasure was discovered when a construction excavation inadvertently found a forgotten collection of more than 500 discarded films of fragile nitrate filmstock from the early 20th century that were buried in and preserved in the permafrost. This historical find was moved to Library and Archives Canada and the US Library of Congress for both transfer to safety filmstock and storage.

The City of Dawson and the nearby ghost town of Forty Mile are featured prominently in the novels and short stories of American author Jack London, including The Call of the Wild. London lived in the Dawson area from October 1897 to June 1898.

Dawson City lies at the western end of the Tintina Fault. This fault line has created the Tintina Trench and continues eastward for several hundred kilometres. Erosional remnants of lava flows form outcrops immediately north and west of Dawson City. 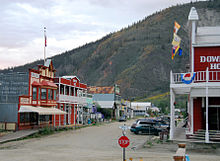 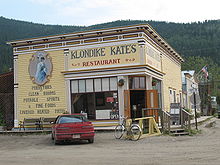 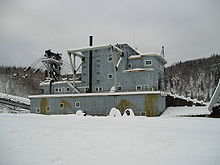 Dawson was incorporated as a city in 1902 when it met the criteria for "city" status under the municipal act of that time. It retained the incorporation even as the population plummeted. When a new municipal act was adopted in the 1980s, Dawson met the criteria of "town", and was incorporated as such, although with a special provision to allow it to continue to use the word "City", partially for historic reasons, partially to distinguish it from Dawson Creek, a small city in northeastern British Columbia. Dawson Creek is also named in honour of George Mercer Dawson. This led the territorial government to post the following signs at the boundaries of the town: "Welcome to the Town of the City of Dawson".

In 2004, the Yukon government removed the mayor and the town council, as a result of the town going bankrupt. The territorial government accepted a large portion of the responsibility for this situation in March 2006, writing off $3.43 million of the debt and leaving the town with $1.5 million still to pay off. Elections were set for June 15, 2006. John Steins, a local artist and one of the leaders of the movement to restore democracy to Dawson, was acclaimed as mayor, while 13 residents ran for the 4 council seats.

Today, Dawson City's main industries are tourism and gold mining. Gold mining started in 1896 with the Bonanza (Rabbit) Creek discovery by George Carmack, Dawson Charlie and Skookum Jim Mason (Keish). The area's creeks were quickly staked and most of the thousands who arrived in the spring of 1898 for the Klondike Gold Rush found that there was very little opportunity to benefit directly from gold mining. Many instead became entrepreneurs to provide services to miners.

Starting approximately 10 years later, large gold dredges began an industrial mining operation, scooping huge amounts of gold out of the creeks, and completely reworking the landscape, altering the locations of rivers and creeks and leaving tailing piles in their wake. A network of canals and dams were built to the north to produce hydroelectric power for the dredges. The dredges shut down for the winter, but one built for "Klondike Joe Boyle" was designed to operate year-round, and Boyle had it operate all through one winter. That dredge (Dredge No. 4) is open as a National Historic Site of Canada on Bonanza Creek.

The last dredge shut down in 1966, and the hydroelectric facility, at North Fork, was closed when the City of Dawson declined an offer to purchase it. Since then, placer miners have returned to the status of being the primary mining operators in the region.

Besides Tr'ochëk, Dawson is home to several national historic sites many of which are included in the Dawson Historical Complex.[7]

Every February, Dawson City acts as the halfway mark for the Yukon Quest International Sled Dog Race. Mushers entered in the event have a mandatory 36-hour layover in Dawson City while getting their rest and preparing for the second half of the world’s toughest sled dog race. 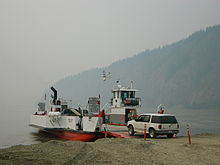 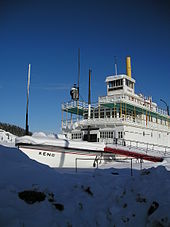 Dawson City is home of the Berton House Writers' Retreat program, housing established Canadian writers for four three-month get-away-from-it-all subsidized residencies each year. Berton House was the childhood home of popular-history writer Pierre Berton, and is across the street from the cabin that was home to poet Robert W. Service, and the cabin that housed writer Jack London during his time in the town is now just up the street. The London cabin was originally on Henderson Creek, a tributary of the Stewart River where Mr. London spent part of the winter 1897-98.

Dawson City was the starting place of impressario Alexander Pantages. He opened a small theatre to serve the city. Soon, however, his activities expanded and the thrifty Greek went on and became one of America's greatest theatre and movie tycoons.

Pierre Berton narrated the 1957 film City of Gold which describes the excitement of Dawson City during the gold rush. Pierre Berton also wrote the book "Klondike", a historical account of the gold rush to the Klondike 1896-1899.

The city was home to the Dawson City Nuggets hockey team, who in 1905 challenged the Ottawa Silver Seven for the Stanley Cup. Travelling to Ottawa by dog sled, ship, and train, the team lost the most lopsided series in Stanley Cup history, losing two games by the combined score of 32 to 4.

Martha Black, the second woman elected to the Canadian House of Commons, as a single mother in Dawson earned a living by staking gold mining claims and running a sawmill and a gold ore-crushing plant. She later married George Black, Commissioner of Yukon, and in 1935 was elected to the House of Commons for the riding of Yukon as an Independent Conservative taking the place of her ill husband.[10]

William Judge, a Jesuit priest who during the 1897 Klondike Gold Rush established a facility in Dawson which provided shelter, food and any available medicine to the many hard-at-luck gold miners who filled the town and its environs.[11]

William Ogilvie, a Dominion land surveyor, explorer and Commissioner of the Yukon, surveyed the townsite of Dawson City and was responsible for settling many disputes between miners.[12]

In fiction, Scrooge McDuck came to Dawson in his quest for gold. He became known as the "King of Klondike" in the city.