Spirometry (meaning the measuring of breath) is the most common of the pulmonary function tests (PFTs), measuring lung function, specifically the measurement of the amount (volume) and/or speed (flow) of air that can be inhaled and exhaled. Spirometry is an important tool used for generating pneumotachographs which are helpful in assessing conditions such as asthma, pulmonary fibrosis, cystic fibrosis, and COPD. 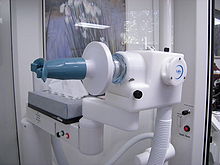 Device for spirometry. The patient places his or her lips around the blue mouthpiece. The teeth go between the nubs and the shield, and the lips go over the shield. A noseclip guarantees that breath will flow only through the mouth. 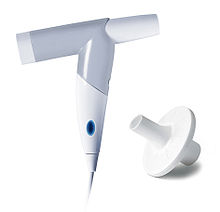 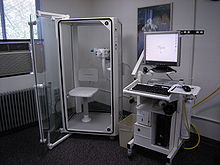 Screen for spirometry readouts at right. The chamber can also be used for body plethysmography.

The spirometry test is performed using a device called a spirometer, which comes in several different varieties. Most spirometers display the following graphs, called spirograms:

Generally, the patient is asked to take the deepest breath they can, and then exhale into the sensor as hard as possible, for as long as possible, preferably at least 6 seconds. It is sometimes directly followed by a rapid inhalation (inspiration), in particular when assessing possible upper airway obstruction. Sometimes, the test will be preceded by a period of quiet breathing in and out from the sensor (tidal volume), or the rapid breath in (forced inspiratory part) will come before the forced exhalation.

The maneuver is highly dependent on patient cooperation and effort, and is normally repeated at least three times to ensure reproducibility. Since results are dependent on patient cooperation, FVC can only be underestimated, never overestimated. FEV1 may sometimes be overestimated in people with some diseases — a softer blow can reduce the spasm or collapse of lung tissue to elevate the measure.

Due to the patient cooperation required, spirometry can only be used on children old enough to comprehend and follow the instructions given (6 years old or more), and only on patients who are able to understand and follow instructions — thus, this test is not suitable for patients who are unconscious, heavily sedated, or have limitations that would interfere with vigorous respiratory efforts. Other types of lung function tests are available for infants and unconscious persons.

Another major limitation is the fact that many intermittent or mild asthmatics have normal spirometry between acute exacerbation, limiting spirometry's usefulness as a diagnostic. It is more useful as a monitoring tool: a sudden decrease in FEV1 or other spirometric measure in the same patient can signal worsening control, even if the raw value is still normal. Patients are encouraged to record their personal best measures.

Spirometry can also be part of a bronchial challenge test, used to determine bronchial hyperresponsiveness to either rigorous exercise, inhalation of cold/dry air, or with a pharmaceutical agent such as methacholine or histamine.

Sometimes, to assess the reversibility of a particular condition, a bronchodilator is administered before performing another round of tests for comparison. This is commonly referred to as a reversibility test, or a post bronchodilator test (Post BD), and is an important part in diagnosing asthma versus COPD.

Other complementary lung functions tests include plethysmography and nitrogen washout. 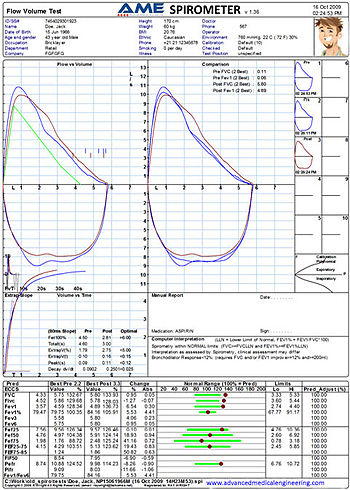 Example of a modern PC based spirometer printout.

Results are usually given in both raw data (litres, litres per second) and percent predicted — the test result as a percent of the "predicted values" for the patients of similar characteristics (height, age, sex, and sometimes race and weight). The interpretation of the results can vary depending on the physician and the source of the predicted values. Generally speaking, results nearest to 100% predicted are the most normal, and results over 80% are often considered normal. Multiple publications of predicted values have been published and may be calculated online based on age, sex, weight and ethnicity. However, review by a doctor is necessary for accurate diagnosis of any individual situation.

A bronchodilator is also given in certain circumstances and a pre/post graph comparison is done to assess the effectiveness of the bronchodilator. See the example printout. 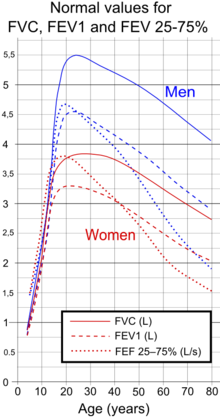 Forced vital capacity (FVC) is the volume of air that can forcibly be blown out after full inspiration, measured in liters. FVC is the most basic maneuver in spirometry tests.

Average values for FEV1 in healthy people depend mainly on sex and age, according to the diagram at left. Values of between 80% and 120% of the average value are considered normal.[4] Predicted normal values for FEV1 can be calculated online and depend on age, sex, height, weight and ethnicity as well as the research study that they are based upon.

FEV1/FVC (FEV1%) is the ratio of FEV1 to FVC. In healthy adults this should be approximately 75–80%. In obstructive diseases (asthma, COPD, chronic bronchitis, emphysema) FEV1 is diminished because of increased airway resistance to expiratory flow; the FVC may be decreased as well, due to the premature closure of airway in expiration, just not in the same proportion as FEV1 (for instance, both FEV1 and FVC are reduced, but the former is more affected because of the increased airway resistance). This generates a reduced value (<80%, often ~45%). In restrictive diseases (such as pulmonary fibrosis) the FEV1 and FVC are both reduced proportionally and the value may be normal or even increased as a result of decreased lung compliance.

A derived value of FEV1% is FEV1% predicted, which is defined as FEV1% of the patient divided by the average FEV1% in the population for any person of similar age, sex and body composition.

Forced expiratory flow (FEF) is the flow (or speed) of air coming out of the lung during the middle portion of a forced expiration. It can be given at discrete times, generally defined by what fraction remains of the forced vital capacity (FVC). The usual intervals are 25%, 50% and 75% (FEF25, FEF50 and FEF75), or 25% and 50% of FVC. It can also be given as a mean of the flow during an interval, also generally delimited by when specific fractions remain of FVC, usually 25–75% (FEF25–75%). Average ranges in the healthy population depend mainly on sex and age, with FEF25–75% shown in diagram at left. Values ranging from 50-60% and up to 130% of the average are considered normal.[4] Predicted normal values for FEF can be calculated online and depend on age, sex, height, weight and ethnicity as well as the research study that they are based upon.

Recent research suggests that FEF25-75% or FEF25-50% may be a more sensitive parameter than FEV1 in the detection of obstructive small airway disease.[6][7] However, in the absence of concomitant changes in the standard markers, discrepancies in mid-range expiratory flow may not be specific enough to be useful, and current practice guidelines recommend continuing to use FEV1, VC, and FEV1/VC as indicators of obstructive disease.[8][9]

More rarely, forced expiratory flow may be given at intervals defined by how much remains of total lung capacity. In such cases, it is usually designated as e.g. FEF70%TLC, FEF60%TLC and FEF50%TLC.[5] 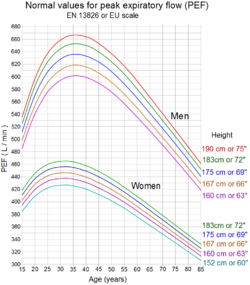 Peak expiratory flow (PEF) is the maximal flow (or speed) achieved during the maximally forced expiration initiated at full expiration, measured in liters per minute.

Tidal volume (TV) is the volume of air inspired or expired in a single breath at rest.

Diffusing capacity (DLCO)is the carbon monoxide uptake from a single inspiration in a standard time (usually 10 sec). Since air consists of very minute or trace quantities of CO, 10 seconds is considered to be the standard time for inhalation, then rapidly blow it out (exhale). The exhaled gas is tested to determine how much of the tracer gas was absorbed during the breath. This will pick up diffusion impairments, for instance in pulmonary fibrosis.[11] This must be corrected for anemia (because rapid CO diffusion is dependent on hemoglobin in RBC's; a low hemoglobin concentration, anemia, will reduce DLCO) and pulmonary hemorrhage (excess RBC's in the interstitium or alveoli can absorb CO and artificially increase the DLCO capacity). Atmospheric pressure and/or altitude will also affect measured DLCO, and so a correction factor is needed to adjust for standard pressure. Online calculators are available to correct for hemoglobin levels and altitude and/or pressure where the measurement was taken.

Maximum voluntary ventilation (MVV) is a measure of the maximum amount of air that can be inhaled and exhaled within one minute. For the comfort of the patient this is done over a 15 second time period before being extrapolated to a value for one minute expressed as liters/minute. Average values for males and females are 140–180 and 80–120 liters per minute respectively.

When estimating static lung compliance, volume measurements by the spirometer needs to be complemented by pressure transducers in order to simultaneously measure the transpulmonary pressure. When having drawn a curve with the relations between changes in volume to changes in transpulmonary pressure, Cst is the slope of the curve during any given volume, or, mathematically, ΔV/ΔP.[12] Static lung compliance is perhaps the most sensitive parameter for the detection of abnormal pulmonary mechanics.[13] It is considered normal if it is 60% to 140% of the average value in the population for any person of similar age, sex and body composition.[4]

In those with acute respiratory failure on mechanical ventilation, "the static compliance of the total respiratory system is conventionally obtained by dividing the tidal volume by the difference between the "plateau" pressure measured at the airway opening (PaO) during an occlusion at end-inspiration and positive end-expiratory pressure (PEEP) set by the ventilator".[14]

Maximal pressure (Pmax and Pi)
Pmax is the asymptotically maximal pressure that can be developed by the respiratory muscles at any lung volume and Pi is the maximum inspiratory pressure that can be developed at specific lung volumes.[15] This measurement also requires pressure transducers in addition. It is considered normal if it is 60% to 140% of the average value in the population for any person of similar age, sex and body composition.[4] A derived parameter is the coefficient of retraction (CR) which is Pmax/TLC .<hedenstrom2009/>