The Seven-arm Octopus (Haliphron atlanticus) is the largest known species of octopus based on scientific records, with a total estimated length of 4 m and weight of 75 kg.[1][2] However, there have been claims of even larger octopuses of the species Enteroctopus dofleini. 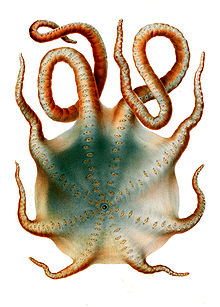 The Seven-arm Octopus is so named because in males the hectocotylus (a specially modified arm used in egg fertilization) is coiled in a sac beneath the right eye. Due to this species' thick gelatinous tissue, the arm is easily overlooked, giving the appearance of just seven arms. However, like other octopuses, it actually has eight.

In 2002, a single specimen of giant proportions was caught by fisheries trawling off the eastern Chatham Rise, New Zealand. This specimen, the largest of this species and of all octopuses, was the first validated record of Haliphron from the South Pacific. It had a mantle length of 0.69 m, total length of 2.90 m, and weight of 61.0 kg, although it was incomplete.

The type specimen of H. atlanticus was collected in the Atlantic Ocean at 38°N 34°W. It is deposited at the Zoologisk Museum, University of Copenhagen.[3]