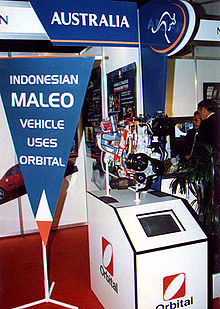 Orbital engine on display in Jakarta

The Sarich orbital engine is a type of internal combustion engine, featuring rotary rather than reciprocating motion of its internal parts. It differs from the conceptually similar Wankel engine by using a shaped rotor that rolls around the interior of the engine, rather than having a trilobular rotor that spins "in place".

The theoretical advantage is that there is no high-speed contact area with the engine walls, unlike in the Wankel where edge wear is a problem. However, the combustion chambers are divided by blades which do have contact with both the walls and the rotor, and are said to have been difficult to seal due to the perpendicular intersection with the moving impeller. The orbital engine was invented in 1972 by Ralph Sarich, an engineer from Perth, Australia, who worked on the concept for years without ever producing a production engine. A prototype was demonstrated, running on the bench with no load. The engine can run on compressed air or steam. The engine does not need oil to run at all[citation needed]. It produces very high revs. It has only one moving part which can be run as a pump.

The Sarich orbital engine has a number of fundamental unsolved problems that have kept it from becoming a practical engine. Some key components cannot be cooled and others cannot readily be lubricated.[1] It is very susceptible to overheating. At one press conference where Ralph Sarich presented the engine, automotive engineer Phil Irving (designer of the Vincent Motorcycle and Brabham Formula One engines) pointed out a number of technical difficulties.