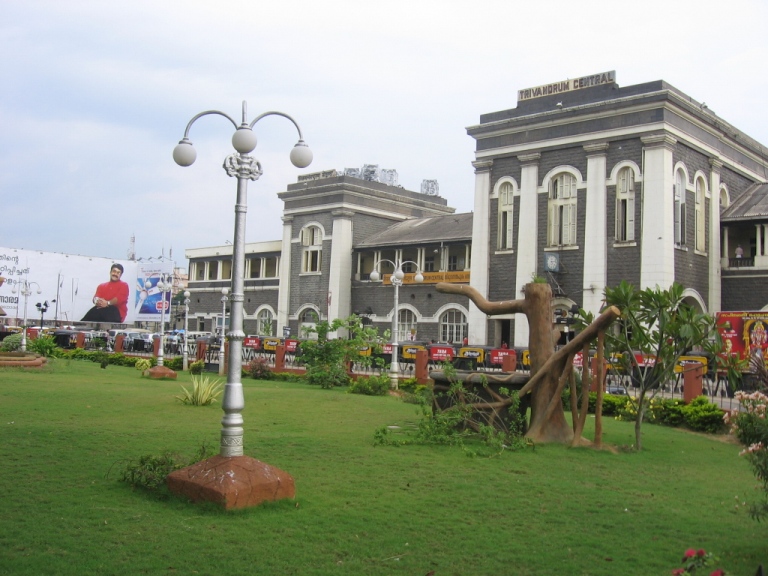 image_caption = Central Station Building, a view from the park in front.
opened =
platform = 5

Trivandrum Central is the biggest railway station in the state of in and one of the important rail hubs in South India. [http://www.hindu.com/2007/03/07/stories/2007030712450500.htm Largest Railway Station in Kerala] Trains from here connect the city of (Trivandrum) to other states of India. The building of the railway station is one of the landmarks of Trivandrum. The Trivandrum Central station was built by the Maharajah of and inaugurated on . [http://www.thehindu.com/2006/11/05/stories/2006110501550200.htm Central station completes 75 years ] No bricks were used for the construction of this station building; it was built completely with rock masonry. [http://www.irfca.org/articles/jimmyjose-20051128-quilon.html Quilon - Trivandrum Central Metre Gauge Line] A second terminal was opened in 2004 to handle passenger traffic. This station is completely Wi-Fi enabled.Fact|date=March 2007

This station is also noted for a whole range of amenities available within the premises. The station has book-shops, restaurants, accommodation, Internet browsing centers and even an essential commodities shopping mall. A second satellite station was opened in 2005 at Kochuveli, near the International Airport. is the first major city from south along the second longest train route in the world, Kanyakumari to .

The foresightedness of Maharajah is well visible in the layout of station. was a branch line station but the Maharajah built it at par with the counterparts in the major cities of India. Though the station was built to handle just two departures per day in 1931, it now handles more than 30. The number of people visiting the station has exponentially increased during the last sixty years. But the station handles the traffic and passengers with ease, without much of a change to the major structure. The station had just one platform in the beginning. It now has eight. Many of the stations, especially Ernakulam Jn, the second most important station in Kerala struggles to handle the exponential growth. Yet strikes out as a brilliant foresight.

The station handles over 200,000 passengers daily. [http://www.thehindubusinessline.com/2007/01/15/stories/2007011501450200.htm More passenger facilities] Several facilities such as restaurants, book stalls, rooms for daily rent, rest rooms, etc. are provided to serve this high volume of passengers. An air-conditioned dormitory, improved and extended parking and new pedestrian entry were the new facilities opened. The total available parking area comes around 5,500 m². An additional 400 m² covered area has been added to this. [http://www.thehindubusinessline.com/2007/01/15/stories/2007011501450200.htm More facilities at Thiruvananthapuram Central]

Trivandrum Central is well equipped with modern security gadgets, and is the first station in the state to install video surveillance. The "Networked electronic surveillance system" is installed in this Central Station by (RPF) for improving the security and for monitoring the movement of passengers arriving at the station. [http://www.thehindu.com/2006/08/24/stories/2006082423560300.htm Video surveillance system at Central ]

Decision has been taken by the Indian Railways to convert the Trivandrum Central railway station into world-class standards. The foundation stone for the expansion and modernisation of the station was laid by the Union Minister for Railways, Lalu Prasad in December 2006. Tenders have been invited for carrying out feasibility studies for this proposed project. More than Rs.100 is needed for the first phase of this project. [http://www.hinduonnet.com/2006/11/08/stories/2006110811100100.htm Rs.100 crores for modernization]

A new complex of the railway station will be built with a built-up area of 1,000,000 square feet. All modern facilities including an office and commercial complex is planned here. The proposal to set up a suburban terminal at or Putharikandam maidan is also in the pipeline. It is estimated that only a consortium would be able to take up the expansion project of Trivandrum Central, since the project is a massive one. [http://www.hindu.com/2007/03/07/stories/2007030712450500.htm Thiruvananthapuram Central to be made a world-class station]