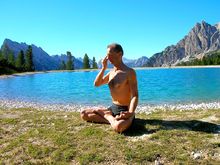 Of these meanings, the concept of "vital air" is used by Bhattacharyya to describe the concept as used in Sanskrit texts dealing with pranayama.[3] Thomas McEvilley translates "prana" as "spirit-energy".[4] Its most subtle material form is the breath, but is also to be found in blood, and its most concentrated form is semen in men and vaginal fluid in women.[5]

Monier-Williams defines the compound prāṇāyāma as (m., also pl.) "N. of the three 'breath-exercises' performed during Saṃdhyā (See pūraka, recaka, kumbhaka"[6] This technical definition refers to a particular system of breath control with three processes as explained by Bhattacharyya: pūraka (to take the breath inside), kumbhaka (to retain it), and recaka (to discharge it).[7] There are also other processes of pranayama in addition to this three-step model.[7]

Macdonell gives the etymology as prāṇa + āyāma and defines it as "m. suspension of breath (sts. pl.)".[8]

Apte's definition of āyāmaḥ derives it from ā + yām and provides several variant meanings for it when used in compounds. The first three meanings have to do with "length", "expansion, extension", and "stretching, extending", but in the specific case of use in the compound prāṇāyāma he defines āyāmaḥ as meaning "restrain, control, stopping".[9]

An alternative etymology for the compound is cited by Ramamurti Mishra, who says that:

Someone who studies and teaches pranayama is called a Pranalogist.

Some scholars distinguish between hatha and raja yoga varieties of pranayama, with the former variety usually prescribed for the beginner. According to Taimni, hatha yogic pranayama involves manipulation of pranic currents through breath regulation for bringing about the control of chitta-vrittis and changes in consciousness, whereas raja yogic pranayama involves the control of chitta-vrittis by consciousness directly through the will of the mind.[11] Students qualified to practice pranayama are therefore always initiated first in the techniques of hatha pranayama.[12]

Pranayama is mentioned in verse 4.29 of the Bhagavad Gītā.[13]

According to Bhagavad-Gītā As It Is, "prāṇāyāma" is translated to "trance induced by stopping all breathing", also being made from the two separate Sanskrit words, "prāṇa" and "āyāma".[14]

Yoga primarily works with the energy in the body through the science of pranayama or energy-control. Prana also means ‘breath.’ Yoga teaches how to still the mind through breath-control and attain higher states of awareness. The higher teachings of yoga take one beyond techniques and show the yogi or yoga practitioner how to direct his concentration in such a way as not only to harmonize human with divine consciousness, but to merge his consciousness in the Infinite.

Pranayama is the fourth 'limb' of the eight limbs of Raja Yoga mentioned in verse 2.29 in the Yoga Sutras of Patanjali.[18][19] Patanjali discusses his specific approach to pranayama in verses 2.49 through 2.51, and devotes verses 2.52 and 2.53 to explaining the benefits of the practice.[20] Patanjali does not fully elucidate the nature of prana, and the theory and practice of pranayama seem to have undergone significant development after him.[21] He presents pranayama as essentially an exercise that is preliminary to concentration, as do the earlier Buddhist texts.[21]

Many yoga teachers advise that pranayama should be part of an overall practice that includes the other limbs of Patanjali's Raja Yoga teachings, especially Yama, Niyama, and Asana.[22]

According to the Pali Buddhist Canon, the Buddha prior to his enlightenment practiced a meditative technique which involved pressing the palate with the tongue and forcibly attempting to restrain the breath. This is described as both extremely painful and not conducive to enlightenment.[23] According to the Buddhist scheme, breathing stops with the fourth jhana, though this is a side-effect of the technique and does not come about as the result of purposeful effort.[24]

The Buddha did incorporate moderate modulation of the length of breath as part of the preliminary tetrad in the Anapanasati Sutta. Its use there is preparation for concentration.[21] According to commentarial literature, this is appropriate for beginners.[25]

For the Buddha, the most important aspect of breath meditation is the consciousness attending to the breath.[26] Buddhist tradition in general has urged moderation in the area of manipulation of the breath.[27] On the other hand, the popular Buddhist teacher Thanissaro Bhikku has advised his students to 'fiddle with the breath' until it becomes comfortable.[28] See Anapanasati for more about active and passive breathing.

The practitioners of the yogas of Mahamudra and Dzogchen are similar to those reached by the practitioners of pranayama in that in all cases there is a union with the nondual omnipresent - Brahman in Hinduism or Dharmakaya in Buddhism.[citation needed] See also Mysticism.

Several researchers have reported that pranayama techniques are beneficial in treating a range of stress related disorders,[29] improving autonomic functions,[30] relieving symptoms of asthma[31] (though a different study did not find any improvement[32]) and reducing signs of oxidative stress.[33][34] Practitioners report that the practice of pranayama develops a steady mind, strong will-power, and sound judgement,[22] and also claim that sustained pranayama practice extends life and enhances perception.[35]