The Operating Forces are further subdivided into three categories: Marine forces assigned to Unified Combatant Commands, Marine Corps Security Forces guarding naval installations, and Marine Security Guard detachments at American embassies. Under the "Forces for Unified Commands" memo, Marine forces are assigned to each of the regional unified combatant commands at the discretion of the Secretary of Defense and with the approval of the President. Since 1991, the Marine Corps has maintained component headquarters at each of the regional unified combatant commands.[1]

Relationship with other Services

Since the Marine Corps' combat capabilities overlap those of the U.S. Army, the latter has historically viewed the Corps as encroaching on the Army's capabilities and competing for money, missions, and fame.[citation needed] The attitude dates back to the founding of the Marine Corps, when General George Washington refused to allow the initial Marine battalions to be drawn from among his army. Most significantly, in the aftermath of World War II, Army efforts to restructure the American defense establishment involved the dissolution of the Marine Corps and the folding of its capabilities into the other services. Leading this movement were such prominent Army officers as General Dwight Eisenhower and Army Chief of Staff George C. Marshall.[2]

The Marine Corps is a partner service with the U.S. Navy under the Department of the Navy. Both the Chief of Naval Operations (CNO) and Commandant of the Marine Corps (CMC), heads of their respective services, report directly to the Secretary of the Navy (SECNAV), a civilian who heads the Department of the Navy (DON). As a result, the Navy and Marine Corps have a close relationship, more so than with other branches of the United States Military. Recent whitepapers and promotional literature have commonly used the phrase "Navy-Marine Corps Team"[3] .[4] This relationship stems from the Navy providing transport, logistical, medical, and religious service as well as combat support to put Marine units into the fight where they are needed. Conversely, Marines are responsible for conducting land operations to support Naval campaigns, including the seizure of naval and air bases. All Marine Aviation programs except for specific Command and Control and Air Defense programs are funded by the Navy and Marine Officers are assigned to the Office of Chief of Naval Operations (OPNAV) Air Warfare Branch (N88) to represent their interests and serve as action officers. By Congressional mandate, the OPNAV Expeditionary Warfare Branch billet (N85) is filled by a Marine general.

The Marine Corps cooperates with the Navy on many institutional support services. The Corps receives a significant portion of its officers from the United States Naval Academy and Navy Reserve Officer Training Corps (NROTC), which are partially staffed by Marines. Marine Corps Drill Instructors contribute to training Naval officers in Officer Candidate School. Marine aviators are trained in the Naval Aviation training pipeline, and utilize Naval weapons and test pilot schools. Currently, Navy aircraft carriers deploy with a Marine Hornet squadron alongside Navy squadrons. The Navy's Blue Angels flight team includes at least one Marine pilot and is supported by a Marines C-130 Hercules aircraft.

Since the Marines do not train Chaplains or medical personnel, officers and enlisted sailors from the Navy fill these roles. Some of these sailors, particularly Hospital Corpsmen, generally wear Marine uniforms emblazoned with the Marine insignia but US Navy name tags in order to be distinct to compatriots but indistinguishable to enemies. The Marines also operate a network security team in conjunction with the Navy. Marines and Sailors share the vast majority of branch-specific awards, with Marines earning the Navy Cross, the highest honor awarded short of the Medal of Honor (which Marines also are awarded, in the Navy version of the Medal of Honor), and other like medals; while an example of the few Marine-only awards is the Good Conduct Medal. 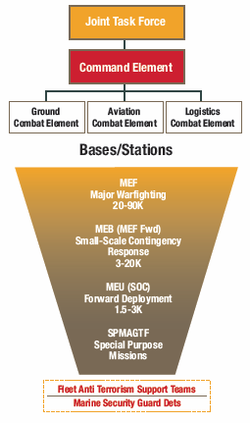 Today, the basic framework for deployable Marine units is the Marine Air-Ground Task Force (MAGTF), a flexible structure that can vary in size. A MAGTF is composed of four elements: the command element (CE), the ground combat element (GCE), the aviation combat element (ACE) and the logistics combat element (LCE).[5] A MAGTF can operate independently or as part of a larger coalition. It is a temporary organization formed for a specific mission and dissolved after completion of that mission.

The MAGTF structure reflects a strong tradition in the Corps towards self-sufficiency and a commitment to combined arms, both essential assets to an expeditionary force often called upon to act independently in discrete, time-sensitive situations. The history of the Marine Corps as well has led to a wariness towards relying too much on its sister services, and towards joint operations in general[citation needed].

The three Marine Expeditionary Forces are:

Each of the seven MEUs are assigned to their respective Navy fleet as components of the Fleet Marine Force: three to the Atlantic Fleet (based at Camp Lejeune), and four to the Pacific Fleet (three based at Camp Pendleton and one in Okinawa). Each is commanded by a colonel with a combat arms background thus, infantry or aviator. The MEU components consist of a command element, ground combat element, aviation combat element, and a logistics combat element each commanded by a lieutenant colonel. MEU rotations are staggered so that while one MEU is on deployment, another is training to deploy, and one is standing down to refit and exchange units. Each MEU is trained during its workup evolution to perform special operations tasks and is then designated as a MEU(SOC) (Special Operations Capable). Each MEU can tailor its equipment to the expected tasking.

Typically, a MEU deploys as part of a Expeditionary Strike Group along with a Amphibious ready group, composed of Navy amphibious ("L-class") ships (a LHD or LHA to serve as the flagship of the Amphibious Squadron, LSD(s), and LPD(s) that embark the MEU), escort ships (such as the Arleigh Burke-class destroyer, Ticonderoga-class cruiser, Oliver Hazard Perry-class frigate, and an Los Angeles-class submarine), and the requisite landing vehicles to transport the MEU ashore, such as the LCAC, LCU surface craft, Amphibious Assault Vehicle/Expeditionary Fighting Vehicle (though the MEU can utilize its helicopter lift assets embarked aboard the LHD or LHA). The theater component commander can use the ESG in its entirety or detach units as needed, though the MEU usually remains aboard the ships of the ARG to use it as their principal base of operations. This ability to remain at sea and "over the horizon" until called is a unique capability of the ARG/MEU.

The basic organization of Marine Corps infantry units follows the "rule of threes", which places three subordinates under a commander, not counting support elements.[6] The organization and weapons are from the Marine Corps Table of Organization and Equipment standard. Note that these are principles, but according to manpower and mission needs units can deviate from the TOE (e.g. with four subordinate units instead of three, or a commander who is a rank above or below the rank specified). Supporting units will have their own organization and equipment, but generally also follow the "rule of threes".

A weapons platoon will substitute for the squads:[7][8]
It is led by a 2nd or 1st Lieutenant.

A brigade, commanded by a brigadier general, is less common in the Marine Corps, but is typically made up of one or more regiments plus support units.

Battalions and larger units have a Sergeant Major, and an Executive Officer as second in command, plus officers and others for a military staff: Administration (S-1), Intelligence (S-2), Operations (S-3), Logistics (S-4), Civil Affairs (wartime only) (S-5), and Communications (S-6). Units of battalion size or larger may be reinforced by the addition of supporting tank or artillery units, as in the Battalion Landing Teams comprising the GCEs of Marine Expeditionary Units.

The four Marine divisions are:

The mission of Marine Corps aviation is to provide the MAGTF commander with an Aviation Combat Element (ACE) capable of conducting air operations in support of the seizure and defense of advanced Naval bases, and conducting such land operations as may be directed by the Joint Force commander.

Aviation units are organized into:

The four Marine aircraft wings are:

In addition to logistics, the LCE provides engineers, maintenance troops, medical personnel, and other specialized units.

The four Marine logistics groups are:

Although the notion of a Marine special warfare contribution to the U.S. Special Operations Command (USSOCOM) was considered as early as the founding of USSOCOM in the 1980s, it was resisted by the Marine Corps. Then Commandant Paul X. Kelley expressed the popular belief that Marines should support Marines, and that the Corps should not fund a special warfare capability that would not support Marine operations.[9] However, resistance from within the Marine Corps dissipated when Marine leaders watched the Corp's "crown jewels" - the 15th and 26th MEU (Special Operations Capable) (MEU(SOC)s) sit on the sidelines during the early stages of Operation Enduring Freedom while other special warfare units led the way.[10] After a three-year development period, the Marine Corps in 2006 agreed to supply a 2,700 - strong unit, Marine Forces Special Operations Command (MARSOC), which would answer directly to USSOCOM. [11]

The Special Operation Capable forces are the units of the Marine Corps that are fully equipped, and prepared for any hostile, or emergency worldwide. Being very co-dependent of the air-ground task force, they are capable of conducting special operations in conventional warfare, and often overlapping in unconventional methods, comparable to other special operations forces of maritime regions. Many special mission tasks are mostly infantry support units, such as reconnaissance, ANGLICO, and others.