Cooma is a town in the south of New South Wales, Australia. It is located 115 km south of the national capital, Canberra, via the Monaro Highway. It is also on the Snowy Mountains Highway, connecting Bega with the Riverina. The town has a population of 6,587.[1] Cooma is the main town of the Monaro region. It is 800 metres (2,620 ft) above sea level. The name could have derived from an Aboriginal word Coombah, meaning 'big lake' or 'open country'.[2]

In 1949, the town became the headquarters of the Snowy Mountains Scheme and grew rapidly.[citation needed] In 1959 the tenth anniversary of the scheme was celebrated with the erection of an avenue of flags representing the 27 nationalities of people working on the scheme.[citation needed]

Cooma has developed a growing tourism industry as it became the main rest stop for many travellers heading to the NSW snow fields during the winter months. As a result, the town nicknamed itself the 'Gateway to the Snowy Mountains'.[citation needed]

The Aviation Pioneers' Memorial at Cooma contains artifacts recovered from the Avro 618 Ten aircraft Southern Cloud, which crashed on 21 March 1931 in the Toolong range of the Australian Alps. The wreck was not found until 26 October 1958.[citation needed] 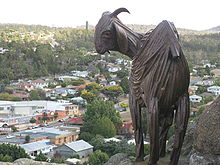 Cooma is 5 kilometres (3 mi) south of the banks of the Murrumbidgee River, a main tributary of the Murray Darling Basin. Cooma sources its water from the river. For the first time in history the river ceased flowing in December 2006. This was due to extensive drought in eastern Australia. This forced Cooma to adopt water restrictions, trying to limit Cooma's water consumption to 5 megalitres (4 acre·ft) a day, down from the then consumption of 11 megalitres (9 acre·ft) a day.[citation needed]

Monaro High School is Cooma's only public high school, it serves the town and seven of the neighbouring rural towns and villages such as Berridale, Jindabyne, Nimmitabel, Bredbo and Dalgety.

There is a Roman Catholic school in Cooma called St Patrick's Parish School providing education from kindergarten to year 10.

Cooma also has a private Christian school known as Snowy Mountains Christian School which provides education from kindergarten to year 10.

Two newspapers operate in Cooma, The Cooma Monaro Express owned by Fairfax Media, and the independently owned The Monaro Post, which began in 2006, owned by Oliver Mohr.[6]

Note: transmitters for 2XL and Snow FM, as well as some ABC services, are in place throughout the Snowy Mountains.

Cooma is serviced by Cooma - Snowy Mountains Airport which is 15 kilometres from the CBD. Cooma has a bus service connecting various areas of town three times a day run by Cooma Coaches. Cooma is serviced by CountryLink buses which make daily journeys to both Canberra and the Bega Valley. Cooma has a taxi service run by Cooma Radio Taxis. Passenger trains operated to Cooma (the Cooma Mail) until 1986.[7]

The Cooma Monaro Railway is a heritage railway using historic NSW Railmotors built in the 1920s. The railway operates a weekend and Public Holiday service to Bunyan and Chakola[8] on a portion of track used by the Bombala railway line.

People born in Cooma include:

The name Cooma is used as a name for a crater on the planet Mars, without specifically commemorating the town[10].