Numerical Recipes is the generic title of a series of books on algorithms and numerical analysis by William H. Press, Saul Teukolsky, William Vetterling and Brian Flannery. In various editions, the books have been in print since 1986. The most recent edition was published in 2007. 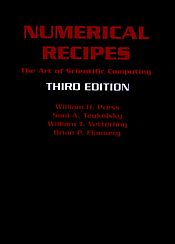 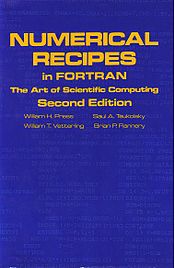 Older edition of the book, in Fortran.)

The Numerical Recipes books cover a range of topics that include both classical numerical analysis (interpolation, integration, linear algebra, differential equations, and so on), signal processing (Fourier methods, filtering), statistical treatment of data, and a few topics in machine learning (hidden Markov models, support vector machines). The writing style is accessible and has an informal tone. The emphasis is on understanding the underlying basics of techniques, not on the refinements that may, in practice, be needed to achieve optimal performance and reliability. Few results are proved with any degree of rigor, although the ideas behind proofs are often sketched, and references are given.

Virtually all methods that are discussed are also implemented in code, which is printed in the book.

First published in 1986, with code in Fortran (soon followed by editions in Pascal, BASIC, and C), Numerical Recipes took, from the start, an opinionated editorial position at odds with the conventional wisdom of the numerical analysis community:

However, as it turned out, the 1980s were fertile years for the "black box" side, yielding important integrated environments such as MATLAB and Mathematica that remain standards today. By the early 1990s, when Second Edition versions of Numerical Recipes (with code in C, Fortran-77, and Fortran-90) were published, it was clear that the constituency for Numerical Recipes was by no means the majority of scientists doing computation, but only that slice that lived between the more mathematical numerical analysts and the larger community using integrated environments. The Second Edition versions occupied a stable role in this niche environment.[3]

By the mid-2000s, the practice of scientific computing had been radically altered by the mature Internet and Web. Recognizing that their Numerical Recipes books were increasingly valued more for their explanatory text than for their code examples, the authors significantly expanded the scope of the book, and significantly rewrote a large part of the text. They continued to include code, still printed in the book, now in C++, for every method discussed.[4] The Third Edition was also released as an electronic book[5], eventually made available on the Web for free (with limited page views) or by paid or institutional subscription (with unlimited page views).

An early reviewer wrote, "The phrase 'numerical recipes' is bound to send the shudders down every honest numerical mathematicians spine."[6]. He also praised, however, the authors' readiness to "go out on a limb and present their own opinions". Given the editorial style of the books, it is not surprising that they were (and to some extent remain) controversial within the numerical analysis community. Early criticism centered on the books' assumed unreliability (the First Edition indeed contained some mistakes), the exclusion of some algorithms, and the authors' implication, not always correct, that their programs were as efficient and reliable as "black-box" libraries, for example the NAG Numerical Libraries. Although not mentioning Numerical Recipes by name, Whaley et al.[7] demonstrate that LAPACK with a highly optimized BLAS library can be an order of magnitude faster (or more) than textbook-style triply nested-loop linear-algebra routines similar to the code in Numerical Recipes. As another example, Frigo and Johnson[8] point out that the fast Fourier transform (FFT) code in Numerical Recipes is 5–40 times slower than highly optimized programs on modern computer architectures.

A third line of criticism centers on the coding style of the books, which strike some modern readers as "Fortran-ish", even when the actual coding language is contemporary, object-oriented C++. Some of this criticism is undoubtedly true, and due to the legacy history of parts of the code. However, the authors have defended their style as necessary to the format of the books, requiring a very terse coding style because of space limitations and for readability.[3]

The books differ by edition (1st, 2nd, and 3rd) and by the computer language in which the code is given.

The books are published by Cambridge University Press.