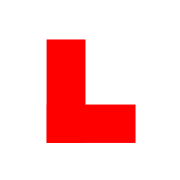 A British, Irish, or Singaporean L-plate

An L-plate is a square plate bearing a sans-serif letter L, for learner, which must be affixed to the front and back of a vehicle in many countries if its driver is a learner under instruction, or a motorcycle rider with provisional entitlement to ride restricted motorcycles.

In Australia the rules vary from state to state. A new driver holds a Learner licence/permit which has a minimum age of 16. This must then be held for a certain amount of time before a driving examination can be undertaken usually 12 months later.[1] After passing the driver must display 'P' plates. Holders of a provisional/probationary licence may be restricted compared to fully licensed drivers in speed, blood alcohol limits, limits on the type and power of their car's engine (i.e., no more than 6 cylinders, no forced induction), and number of demerit points that can be deducted.[2] VicRoads, the Victorian road authority, publish information for learner drivers on the L-Site.[3]

In all states, newly licensed drivers are required by law to display P-plates for varying lengths of time. The P is usually a red or green letter on a white background or a white letter on a red or green background (Victoria & Western Australia only). In New South Wales and Victoria there are two classes of provisional licence, red P-plates are for the first year after passing the Learner test and then after passing a computerised test they are green for two to three years. Western Australia requires six months of red P-plates, where provisional drivers are under a 12 am – 5 am curfew, and one and a half years of green P-plates.

As of July 2007, newly issued Queensland drivers licences have new restrictions for those under 25. Learners must first log 100 hours of driving experience (of which 10 must be undertaken at night) before taking their practical driving examination. Learners can boost this experience by taking professional lessons which counts for 3 times the hours, for up to 10 hours (or 30 logbook hours.) After a period of one year provisional drivers must then pass a hazard-perception test to move from red to green P-Plates where previously only a 3 year duration was required. New restrictions also prevent any under-25, Queensland provisional licence-holder from carrying more than one passenger under the age of 21, who is not an immediate family member, between the hours of 11pm and 5am.[5]

L-platers and the Red and Green P-platers are restricted in some states to a maximum speed of 80(NSW)/110 depending on if you are with an instructor 100 km/h is allowed in certain states and territories, and these values are shown on the respective plates. In QLD and the ACT, there is not restrictions to speed other than the speed limits on the road.

In NSW you need to complete a minimum 120 driving experience hours. The 120 hour minimum driving experience requirement remains the same for all Learner drivers - if you are under 25 years old, you will still need to hold your L-Licence for at least 12 months before attempting to take the Driving Test.

Additionally, learner drivers who are 25 and over are now exempt from completing the Learner driver log-book and any tenure requirement, as of 19 December 2009. They are still required to complete all other formal licensing requirements and are encouraged to use the log book and obtain as much on-road practice with a supervising driver or driving instructor as possible.

Motor vehicles are provincially regulated in Canada, and so regulations vary by province. In British Columbia, following the instructional phase and after passing a road test, new drivers are required to show a green N (for novice) plate until they have passed an additional road test, usually after 24 months.

In British Columbia, a red L (for learner) plate is required for 12 months before the N can be issued, and new drivers with this marking are not permitted to drive without a licensed driver over the age of 25 present in the vehicle.[6]

After learners in Great Britain pass their driving test, they may opt to display green P-plates (for probationary) to show their lack of experience; this is entirely voluntary however. Some new drivers use green L plates (the pre-test colour being red), however P-plates are more common.

L plates are required to be displayed at all times whilst riding a motorcycle or moped of no more than 125 cc (7.6 cu in) after passing motorcycle compulsory basic training (CBT). This sub-licence allows the holder to ride any motorcycle up to 125 cc without a full and proper licence, therefore it is mainly used by younger motorists (16-19) who are legally allowed to ride motorcycles up to 125 cc but cannot afford to buy full lessons to gain a restricted licence (enabling the holder to travel on motorways and carry pillion passengers but only able to ride motorbikes over 33 hp (25 kW) after 2 years). Riders over 21 may opt to train for a full licence therefore a CBT is just a 'stepping stone' to this.

In Northern Ireland for one year after the passing of a driving test, the driver is defined as a "restricted driver" who must not exceed 45 mph and must display an "R-plate" consisting of an red sans-serif R on a white background. L-plates in Northern Ireland commonly have an R-plate as a reverse side. "R-plate" drivers are often viewed as a nuisance on motorways, due to their limited speed, resulting in many restricted drivers not displaying their "R-plates" or not keeping to the restricted speed limit.[7][8]

In Wales either red L plates or red D plates are permitted, due to the bilingual legislation in force within the country, while a learner is driving the car, motorcycle or moped.

Licences may be obtained from the age of 16 and provisional licences require the display of L-plates (similarly to Ireland and the UK). For one year after obtaining a full licence, R-plates (for restricted) must be displayed and speed is restricted to 50 mph (80 km/h) (even on unrestricted Manx roads). As in Northern Ireland, an R-plate is a red R on a square white plate.

In the Republic of Ireland, you can obtain a learners permit at the age of 17. Before applying for your first learners permit you must pass a computerized Driver Theory Test. When driving on a learners permit, you must display L-plates (one front, and one rear) and be accompanied by a driver who has held a full licence for at least two years. These laws were not routinely enforced by the Gardaí, however from 30 June 2008 all learner drivers, including those on legacy provisional licencees, face a fine of €1,000 for a first offence and €2,000 for a second. Similar penalties apply for not displaying L-plates. These laws are enforced more often than before, however they are still mostly ignored.

A learners permit is valid for two years, and will be renewed once without the holder having sat a driving test. After this, proof of an upcoming test appointment or a recent test failure is required for further renewal. A permit holder may not sit a test for at least six months after receiving their permit.

Prior to October 2007, a "provisional licence" was issued which had more lax restrictions - on its first renewal, the holder could drive unaccompanied (but must continue to display L plates), and the accompanying driver did not need any experience, just a full licence. The third or further renewals of the licence - e.g. after failing a test and the expiry of your second licence - brought back the accompaniment requirement. This unusual arrangement led to a situation where a learner driver, having failed their driving test on a 2nd Provisional, could legally drive away from the test center unaccompanied.

The new measures were introduced in an effort to improve road safety, and will be followed by the introduction of 'tiered licensing', with harsher rules applying to those holding a full licence for less than two years. However, the changes were not retroactive. All provisional licences have since expired however, as they are only valid for a period of two years.

In Japan, new drivers must display a Shoshinsha mark (初心者マーク?) (or Wakaba mark (若葉マーク?)) on the front and rear of their vehicle for their first year. Although not related to driving experience, the Koreisha mark (高齢者マーク?) is optional for drivers 70 years old or over and mandatory for 75 years or more. It would theoretically be possible to simultaneously display both a shoshinsha mark and a koreisha mark, for example if a 70 year old were to be newly licensed.

In Malaysia, only cars approved by driving schools may be driven by Learner Drivers after passing the theory test. The car (typically a Perodua Kancil) is required to have at least one L-plate at the front and the back. In the case of motorcycles, Learner riders must affix an L-sticker onto the front and rear of their motorcycles.

The L-plate is very similar to those used in the United Kingdom and Singapore, with the exception being that the background is blue rather than white.

In New Jersey, effective May 1, 2010, drivers under the age of 21 holding a learner's permit or probationary license must display 1x1½-inch detachable red decals on the front and back license plates of their vehicles.

Elsewhere in the world, varying designs are used. In Germany, a usually red plate displaying the word Fahrschule (driving school) is placed on the vehicles during instruction. In Sweden, the plate is green or red (for driving schools) with the text Övningskör (driving practice).[10] In Czechoslovakia, a white L on a blue field, similar to the Swiss one, had been used, but many driving schools have stopped using them recently, instead tagging their cars with the word "Autoškola" ("car school"). In Italy, driving schools' cars are tagged with the words "Scuola guida" (driving school), and private cars with beginner drivers are tagged with a "P" capital letter: both signs are black on white reflective background.