In cellular biology the term membrane transport refers to the collection of mechanisms that regulate the passage of solutes such as ions and small molecules through biological membranes namely lipid bilayers that contain proteins embedded in them. The regulation of passage through the membrane is due to selective membrane permeability - a characteristic of biological membranes which allows them to separate substances of distinct chemical nature. In other words, they can be permeable to certain substances but not to others.[1]
The movements of most solutes through the membrane are mediated by membrane transport proteins which are specialized to varying degrees in the transport of specific molecules. As the diversity and physiology of the distinct cells is highly related to their capacities to attract different external elements, it is postulated that there is a group of specific transport proteins for each cell type and for every specific physiological stage[1]. This differential expression is regulated through the differential transcription of the genes coding for these proteins and its translation, for instance, through genetic-molecular mechanisms, but also at the cell biology level: the production of these proteins can be activated by cellular signaling pathways, at the biochemical level, or even by being situated in cytoplasmic vesicles.[2]

Thermodynamically the flow of substances from one compartment to another can occur in the direction of a concentration or electrochemical gradient or against it. If the exchange of substances occurs in the direction of the gradient, that is, in the direction of decreasing potential, there is no requirement for an input of energy from outside the system; if, however, the transport is against the gradient, it will require the input of energy, metabolic energy in this case.[3] For example, a classic chemical mechanism for separation that does not require the addition of external energy is dialysis. In this system a semipermeable membrane separates two solutions of different concentration of the same solute. If the membrane allows the passage of water but not the solute the water will move into the compartment with the greatest solute concentration in order to establish an equilibrium in which the energy of the system is at a minimum. This takes place because the water moves from a high solvent concentration to a low one (in terms of the solute, the opposite occurs) and because the water is moving along a gradient there is no need for an external input of energy. 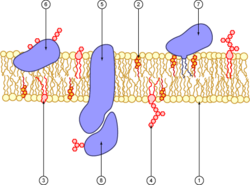 The nature of biological membranes, especially that of its lipids, is amphiphilic, as they form bilayers that contain an internal hydrophobic layer and an external hydrophilic layer. This structure makes transport possible by simple or passive diffusion, which consists of the diffusion of substances through the membrane without expending metabolic energy and without the aid of transport proteins. If the transported substance has a net electrical charge, it will move not only in response to a concentration gradient, but also to an electrochemical gradient due to the membrane potential.

As few molecules are able to diffuse through a lipid membrane the majority of the transport processes involve transport proteins. These transmembrane proteins possess a large number of alpha helices immersed in the lipid matrix. In bacteria these proteins are present in the beta lamina form.[4] This structure probably involves a conduit through hydrophilic protein environments that cause a disruption in the highly hydrophobic medium formed by the lipids.[1] These proteins can be involved in transport in a number of ways: they act as pumps driven by ATP, that is, by metabolic energy, or as channels of facilitated diffusion.

A physiological process can only take place if it complies with basic thermodynamic principles. Membrane transport obeys physical laws that define its capabilities and therefore its biological utility.
A general principle of thermodynamics that governs the transfer of substances through membranes and other surfaces is that the exchange of free energy, ΔG, for the transport of a mole of a substance of concentration C1 in a compartment to another compartment where it is present at C2 is:[5]

Where C2 is less than C1 ΔG is negative, and the process is thermodynamically favorable. As the energy is transferred from one compartment to another, except where other factors intervene, an equilibrium will be reached where C2=C1, and where G=0. However, there are three circumstances under which this equilibrium will not be reached, circumstances which are vital for the in vivo functioning of biological membranes:[5]

Where F is Faraday's constant and ΔP the membrane potential in volts. If ΔP is negative and Z is positive, the contribution of the term ZFΔP to ΔG will be negative, that is, it will favor the transport of cations from the interior of the cell. So, if the potential difference is maintained, the equilibrium state ΔG=0 will not correspond to a equimolar concentration of ions on both sides of the membrane.

Where ΔGb corresponds to a favorable thermodynamic reaction, such as the hydrolysis of ATP, or the co-transport of a compound that is moved in the direction of its gradient.

A semipermeable membrane separates two compartments of different solute concentrations: over time, the solute will diffuse until equilibrium is reached.

As mentioned above, passive diffusion is a spontaneous phenomenon that increases the entropy of a system and decreases the free energy.[5] The transport process is influenced by the characteristics of the transport substance and the nature of the bilayer. Membrane proteins are not involved in passive diffusion. The diffusion velocity of a pure phospholipid membrane will depend on:

The discovery of the existence of this type of transporter protein came from the study of the kinetics of cross-membrane molecule transport. For certain solutes it was noted that the transport velocity reached a plateau at a particular concentration above which there was no significant increase in uptake rate, indicating a log curve type response. This was interpreted as showing that transport was mediated by the formation of a substrate-transporter complex, which is conceptually the same as the enzyme-substrate complex of enzyme kinetics. Therefore, each transport protein has an affinity constant for a solute that is equal to the concentration of the solute when the transport velocity is half its maximum value. This is equivalent in the case of an enzyme to the Michaelis-Menten constant.[6]

Some important features of active transport in addition to its ability to intervene even against a gradient, its kinetics and the use of ATP, are its high selectivity and ease of selective pharmacological inhibition[6]

Uniport, symport, and antiport of molecules through membranes.

A transport protein can move various ions and molecules, they are distinguished according to their directionality:

Both can be referred to as co-transporters. 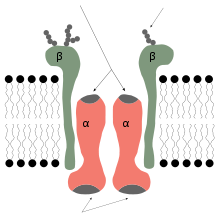 A pump is a protein that hydrolyses ATP in order to transport a particular solute through a membrane in order to generate an electrochemical gradient to confer certain membrane potential characteristics on it. This gradient is of interest as an indicator of the state of the cell through parameters such as the Nernst potential. In terms of membrane transport the gradient is of interest as it contributes to increased system entropy in the co-transport of substances against their gradient. One of the most important pumps in animal cells is the sodium potassium pump, that operates through the following mechanism:[7]

As the main characteristic of transport through a biological membrane is its selectivity and its subsequent behavior as a barrier for certain substances, the underlying physiology of the phenomenon has been studied extensively. Investigation into membrane selectivity have classically been divided into those relating to electrolytes and non-electrolytes.

The ionic channels define an internal diameter that permits the passage of small ions that is related to various characteristics of the ions that could potentially be transported. As the size of the ion is related to its chemical species, it could be assumed a priori that a channel whose pore diameter was sufficient to allow the passage of one ion would also allow the transfer of others of smaller size, however, this does not occur in the majority of cases. There are two characteristics alongside size that are important in the determination of the selectivity of the membrane pores: the facility for dehydration and the interaction of the ion with the internal charges of the pore.[6]
In order for an ion to pass through a pore it must dissociate itself from the water molecules that cover it in successive layers of solvation. The tendency to dehydrate, or the facility to do this, is related to the size of the ion: larger ions can do it more easily that the smaller ions, so that a pore with weak polar centres will preferentially allow passage of larger ions over the smaller ones.[6] When the interior of the channel is composed of polar groups from the side chains of the component amino acids,[7] the interaction of a dehydrated ion with these centres can be more important than the facility for dehydration in conferring the specificity of the channel. For example, a channel made up of histidines and arginines, with positively charged groups, will selectively repel ions of the same polarity, but will facilitate the passage of negatively charged ions. Also, in this case, the smallest ions will be able to interact more closely due to the spatial arrangement of the molecule (stericity), which greatly increases the charge-charge interactions and therefore exaggerates the effect.[6]

There are several databases which attempt to construct phylogenetic trees detailing the evolution of transporter proteins. One such resource is the Transporter Classification database [8]