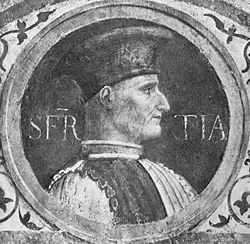 Muzio Attendolo Sforza (May 28, 1369 – January 4, 1424) was an Italian condottiero. Founder of the Sforza dynasty, he led a Bolognese-Florentine army at the Battle of Casalecchio.

He was the father of Francesco Sforza, who ruled Milan for 16 years.

He was born as Giacomo or Jacopo Attendolo in Cotignola (Romagna) to a rich family of rural nobility. Muzzo or Muzio was the short form of the nickname of Giacomuzzo. According to tradition, young Giacomo was plowing a field when a platoon of mercenaries led by Boldrino da Panicale passed nearby in search of recruits. He then stole one his father's horses and followed the soldiers to follow the same career.

Later, together with three brothers and two cousins, he joined the company of Alberico da Barbiano, who nicknamed him "Sforza" ("Strong") for his staunchness and his abilities to suddenly reverse the fortunes of battles. In 1398 he was at the service of Perugia against the Milanese troops of Gian Galeazzo Visconti, to whom Muzio soon switched his loyalty following the typical behavior of mercenary chieftains of the time. Later he fought for Florence against Visconti but in 1402, at the battle of Casalecchio, was defeated by his former master Alberico da Barbiano. In 1406 he captured Pisa and was subsequently hired by Niccolò III d'Este of Ferrara, who was being menaced by Ottobono Terzi of Parma. 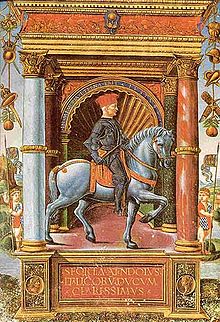 King Ladislaus of Naples named him Gran Connestabile of his kingdom. Sforza's military qualities were mostly needed against Florence and the Pope. He remained for the rest of his life in the Kingdom of Naples, after the King's death (1414), at the service of queen Joan II. However, he attracted the jealousy of Joan's favorite, Pandolfello Alopo, who had him arrested and imprisoned. However, when Sforza's troops intervened, Alopo freed him and Joan gave him the fiefdoms of Benevento and Manfredonia. On this occasion Sforza married Caterina Alopo, Pandolfello's sister. A few months later Sforza was again arrested after a quarrel with James of Bourbon. He was freed only in 1416, after James' fall from power, and Joan gave him back the title of Conestabile.

In 1417 Sforza was sent by Joan to help the pope against Braccio da Montone, together with his son Francesco. Later he returned briefly to Naples, but here he was opposed by Giovanni (Sergianni) Caracciolo, Joan's new lover. In the following, confused, events that led to the arrival of Louis III of Anjou in Naples in opposition to Alfonso V of Aragon, Sforza helped Joan and Sergianni to flee to Aversa.

In 1423, the city of Aquila rebelled and he was sent to reconquer it. In an attempt to save one of his pages during the forging of the Pescara River, Sforza drowned and his body was swept away by the waters.

Sforza's first wife was Antonia Salimbeni, who died in 1411, who had given him Bosio (1411–1476), who was count of Santa Fiora. He had two other children by Caterina Alopo, seven by his mistress Lucia Torsano (including Francesco and Alessandro and Tamira di Cagli.