Chalgrove is a village and civil parish of some 2,750 acres (1,110 ha). It is in South Oxfordshire about 10 miles (16 km) southeast of Oxford. The parish includes the hamlet of Rofford and the former parish of Warpsgrove with which it merged in 1932.

Chalgrove is the site of a small Civil War battle, the Battle of Chalgrove Field, in which John Hampden was wounded. He died of his wounds six days later.

It is now believed that Chalgrove settlement may pre-date the Roman occupation.[citation needed]

A very rare silver Roman coin (c.271 AD) was discovered at Chalgrove: a base silver Roman coin known as a radiate of Emperor Domitian II.[2] This was the first such coin found in Britain. The only other was found in France and was thought to be a forgery until the discovery of the British coin proved the existence of the short-lived emperor.

During the 1976 drought, aerial archaeology found cropmarks of filled-in moats and earthworks beside Back Brook. Subsequent archaeological excavation at this location revealed the remains of a 13th century moated manor house.[3][4]

In the Domesday Book of 1086 the village is called Celgrave which may be derived from the Old English for "at the chalk or limestone pit".

The manor house is the second-oldest building in Chalgrove. Standing partially on the site of an earlier building, originally the de Plessis manor and manorial court-house, this late 14th or early 15th century manor-house was repaired and restored during the 1980s. The central hall, which was horizontally subdivided in the 16th century, contains a medieval oak screen on the ground floor, possibly from the 13th century house, late 16th century painted grey studding on the first floor and a finely-detailed arch-braced collar roof with double purlins with seating for a louvre. The carpentry in the roof is of exceptionally high quality and it is possible that the carpenters were the same as those who had been employed to construct the Royal Palace at nearby Ewelme around the same time. The south wing parlour has 17th-century painted grained panels and the north wing contains a medieval annexe and garderobe chute outlet. The rear extensions are early 16th century.

The Church of England parish church of Saint Mary dates from the 12th century. It was begun by monks from the Abbey of Bec, an important Benedictine abbey in Normandy. The interior comprises a wide nave with two aisles separated by transitional Norman arcades with carved capitals and a chancel. The church is thought to remain substantially as it was in 1500, although some records state that there was a spire on top of the tower until it came down in a violent storm in 1727. The tower contains a single-handed turret clock dated in part from 1699.

In the 13th century the chancel was decorated with a series of wall paintings showing a Tree of Jesse, the Last Judgement and the medieval legend of the Assumption of Mary. Historians believe these wall-paintings were completed around 1320 possibly at the request of the de Barantyn family, who lived in one of the two manors in Chalgrove at the time. The paintings were limewashed over at the time of the English Reformation and rediscovered in 1858 during renovation work commissioned by the Reverend Robert French Laurence. Some of the paintings on the north wall are a little indistinct now due to their age and two of the paintings on the south wall were covered by marble memorials while the paintings lay hidden under the lime wash. St. Mary's has been made a Grade I listed building because of the paintings.[citation needed]

Chalgrove originated as a linear village surrounded by open fields occupying a site on the banks of the stream. Early houses were built along the sides of the original road to Oxford.

In 1086 the Domesday Book counted five mills operating on Chalgrove Brook. Today there is only one mill, at the western end of the village on the appropriately-named 'Mill Lane' opposite The Manor. The mill was restored to working condition in 1998 - including turning the overshot water wheel around to become a high-breast one - and was used to grind corn on an open day in 1999. After Chalgrove, the Brook flows through Stadhampton and then Chiselhampton where it joins the River Thame, a tributary of the River Thames.

Flooding was a problem historically, with 22 houses seriously flooded during 1879. During the 19th century a sluice gate was constructed at the eastern end of the village and from the original Chalgrove Stream (now known as the 'Back Brook') some of the water was diverted to run alongside the current High Street. This artificial loop (the 'Front Brook') has become an attractive feature. The brook's flow is now much reduced and the risk of flooding has declined: only a small section of the High Street is now deemed to be at occasional risk.

After a long period of stagnation, the village's population grew very rapidly from under 1,000 in 1961 to just over 3,000 by 1996 mainly due to a new housing estate being developed in the area known as 'Sixpenny Fields' between the village core and the more recent bypass, the B480. The road into this development is named after the most famous former vicar of the parish, Robert French Laurence[5].

Parts of Chalgrove, and its airfield, featured in the episode 'Many Happy Returns' of the television series 'The Prisoner'.[6]

During the Second World War the government needed level ground for airfields. The standard three-runway Chalgrove Airfield was constructed in 1943, and in February 1944 the United States Army Air Forces moved in with a photo reconnaissance squadron of Lockheed P-38_Lightning aircraft. Three more squadrons joined in March to bring the station to full strength. These squadrons performed many low-level operations over France to provide valuable information prior to, and shortly after, the Normandy landings in June 1944. In March 1945 the USAAF PR squadrons from nearby RAF Mount Farm moved to Chalgrove with their P-51 Mustang and P-38 Lightning aircraft. Reconnaissance work continued over peacetime Europe in order to assess damage. The USAAF left at the end of 1945. 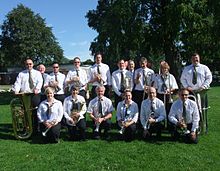 Members of Chalgrove Band in 2011

Chalgrove Band[8] is an amateur brass band, which was formed toward the end of the 19th century, initially as Chalgrove Temperance Band. The earliest photograph of the band is dated 1906. At that time, band practices were held in the top room of the Red Lion pub. Following a break in its history, the band was reformed in 1972 by three local enthusiasts.

In 2007, the band won the London and Southern Counties Fourth Section Championship, and were promoted to the Third Section. In 2011, the band won promotion to the Second Section of the British Brass Band Association. The band performs regularly in the village, including the May Day Parade, the Remembrance Sunday service and concerts in the Village Hall, which also serves as the band's rehearsal venue. 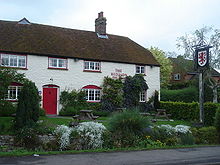 The village has three public houses: The Lamb at the northern end of the village, The Red Lion[9] and The Crown both at the centre, on the High Street. The Red Lion is owned by St. Mary's church and is vested in the Trustees of the Church Estate, but is leased out. There is a post office and five other shops including two grocers, a florist, pharmacy, newsagent and a garage. The village has a General Practitioner's practice, The Brook Surgery.

The village has a primary school,[10] with a Foundation Class for younger children. The local authority provides a bus service for older children to travel to local secondary schools.

Monument Park business park,[11] opposite the airfield and away from the main village, supports a diverse range of businesses.

Chalgrove Cavaliers Football Club[14] organises football for boys and girls between the ages of five and 16.

Regular local events include the May Day Festival and the annual Chalgrove Live Music Festival,[15] held every year since 1988. Chalgrove Midsummer Ball[16] is held every alternate year in the grounds of Chalgrove Manor.