Gorges State Park is a 7,641-acre (30.92 km2)[1] North Carolina state park in Transylvania County, North Carolina in the United States. The land, along Jocassee Gorges, was purchased by the state from Duke Energy Corporation in 1999. It is North Carolina's westernmost state park and one of the state's newest. The park is adjacent to part of the Pisgah National Forest and the N.C. Wildlife Resources Commission's Toxaway Game Land. Gorges State Park provides the principle access to the Horsepasture River on these adjoining public lands.

The state is currently developing facilities at Gorges.

The land of Gorges State Park is a thriving second growth forest. It has recovered from the interference of man to provide a thriving and unique habitat.

One of the most damaging interferences to the Gorges environment occurred in 1916 when the dam containing Lake Toxaway broke. Record amounts of water gushed southward down the Toxaway River, destroying the communities in its path, scouring the gorges and leaving piles of debris 15 to 20 feet (6.1 m) high.

Following the flood, local citizens eventually sold large land tracts in the Gorges to Singer Sewing Machine Company, which logged most of the land. Then, in the 1940s and 1950s, Singer sold the land to Duke Energy Corporation. The corporation purchased the land for its steep topography and high rainfall, which offered opportunities for development of hydropower projects.

Conservation studies, in Jocassee Gorge, began in the late 1970s. In the late 1990s, Duke Energy decided that it no longer needed large portions of the Gorges for future hydropower and offered the land for sale to natural resources agencies in North and South Carolina. The NC Division of Parks and Recreation stepped up to create, with the support of local citizens and the North Carolina General Assembly, one of the newest state parks in 1999.[2]

Gorges State Park is open for year round recreation including, camping, hiking, mountain biking, and fishing. Primitive camping is available in several different natural environments. The Ray Fisher Place campground is located in the Grassy Ridge Access area. It is a hike-in campground with six primitive campsites, each with a picnic table, fire ring and lantern hook. Ray Fisher Place has been closed indefinitely due to construction activities in the park. Another camping area is near the shores of Lake Jocassee, along the Foothills Trail. These campsites are also primitive and hike-in. Dispersed camping is also permitted in the adjoining Pisgah National Forest, and backpackers may register and leave their vehicles in the park. Lake Jocassee is a deep man made lake which forms much of the park's southern boundary, and it is open to trout and bass fishing. The streams of Gorges State Park are all designated Wild Trout Waters.[3] Many miles of trails are open to hiking, mountain biking and horseback riding. 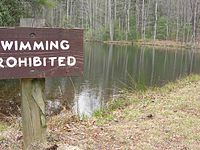 The Grassy Ridge Access off North Carolina Highway 281 in Sapphire is the park's primary access. This area is most well known for providing the principle access to Rainbow Falls and Turtleback Falls on the Horsepasture River. These falls are in the Pisgah National Forest, but it is not uncommon for visitors to mistakenly think the falls are inside the park because the park provides the only easy, legal access to them. Upper Bearwallow Falls is located in the access area, and it currently is the only waterfall in the park, which has an official park trail leading to it. The access area is still development and parts of it may be temporarily closed due to construction.

The average yearly rainfall at Gorges State Park is over 80 inches (2032 mm) creating a temperate rain forest. The rainfall is a result of orographic lift which occurs when an air mass is forced from a low elevation to a higher elevation as it moves over rising terrain. The land at Gorges State Park rises over 2,000 feet (609 m) in just 4 miles (6.43 km).[4] As the air mass gains altitude it expands and cools adiabatically. This cooler air cannot hold the moisture as well as warm air can, which effectively raises the relative humidity to 100%, creating clouds and frequent precipitation.[5]

Gorges State Park is home to a wide variety of habitats due to its geologic formations, elevation, and climate. It is located between the Tennessee Valley/Gulf of Mexico and the Savannah River/Atlantic Ocean drainage basins. Five streams flowing through Gorges State Park carry water over the Blue Ridge Escarpment, gradually at first, before plummeting over waterfalls into a series of gorges.[6]

Gorges State Park is home to roughly 125 rare plant and animal species and 12 endangered or threatened plant and animal species.[6] Many of these rare plants species would typically be found only in the tropic regions of the world. Scientists are unsure of how these plants, including Pringle's aquatic moss and Carolina star-moss, have come to grow in the Appalachian Mountains far from their usual homes. Some scientists believe that spores blew in from the tropics. Others think that the species have remained from a time period when the surrounding area was much warmer.[6]

Gorges State Park is also home to an abundance of plant and wildlife that is more typical to the southern Appalachians. Plant species include, mountain laurel, rhododendron, white pine, red oak, and hickories. Oconee bells are very rare flowering plants are abundant in the gorges of the park. These flowers are endangered and populations of the plant have been found.[6]

The following state parks are within 30 miles (48 km) of Gorges State Park: