Fragile X syndrome (FXS), Martin–Bell syndrome, or Escalante's syndrome (more commonly used in South American countries), is a genetic syndrome that is the most commonly known single-gene cause of autism and the most common inherited cause of intellectual disability.[1][2] It results in a spectrum of characteristic physical and intellectual limitations and emotional and behavioral features which range from severe to mild in manifestation.

The syndrome is associated with the expansion of a single trinucleotide gene sequence (CGG) on the X-chromosome, and results in a failure to express the protein coded by the FMR1 gene, which is required for normal neural development. There are four generally accepted states of the chromosome region involved in Fragile X syndrome which relate to the length of the repeated CGG sequence; Normal (29–31 CGG repeats) (not affected by the syndrome), Premutation (55–200 CGG repeats)(not affected by the syndrome), Full Mutation (more than 200 CGG repeats)(affected), and Intermediate or Gray Zone Alleles (40–60 repeats).[3] 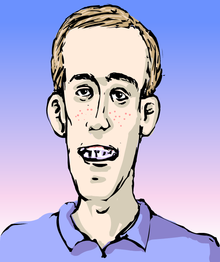 Prominent characteristics of the syndrome include an elongated face, large or protruding ears, and low muscle tone.

Some individuals with the fragile X syndrome also meet the diagnostic criteria for autism. Most females who have the syndrome experience symptoms to a lesser degree because of their second X-chromosome; however, they can develop symptoms just as severe as their male counterparts. While full mutation males tend to present with severe intellectual disability, the symptoms of full mutation females run the gamut of minimally affected to severe intellectual disability, which may explain why females are underdiagnosed relative to males.

In short, similarities between X-linked recessive inheritance and fragile X are:

A difference is that females may also have clinical symptoms, although this is also the case with other conditions classed as x-linked recessive e.g. Haemophilia, due to X-inactivation.[7]

FXS is characterized by social anxiety, including gaze aversion, prolonged time to commence social interaction, and challenges forming peer relationships. Social anxiety in individuals with FXS is related to challenges with face encoding.[10] Face encoding is the ability to recognize a face that one has seen before.

Individuals with FXS show decreased activation in the prefrontal regions of the brain. These regions are associated with social cognition. A child with FXS is likely to have hyperactivity, anxiety, and social deficits. Individuals with fragile X-associated tremor/ataxia syndrome (FXTAS) are likely to experience dementia, mood and/or anxiety disorders. Males with the FMR1 premutation and clinical evidence of FXTAS were found to have increased occurrence of somatization, obsessive–compulsive disorder, interpersonal sensitivity, depression, phobic anxiety and psychoticism.[11]

Females with FXS show a high frequency of avoidant behavior, mood disorder, and habit disorder. Females are significantly more withdrawn and depressed as compared to normal individuals. The size of DNA insertion was related to IQ, severity of attention problems, and withdrawal symptoms. Females with FXS are most vulnerable to social anxiety, social avoidance, withdrawal, and depression, so special attention should be paid.[citation needed]

Mental age is positively correlated and autistic behavior is negatively correlated with sadness in a particular study. The results shows that there are different behavioral profiles for young children than there are for older aged children which implies that temperament and problem behaviors are not rooted in early temperament.[12]

From their 40s onward, males with FXS begin developing progressively more severe problems in performing tasks that require the central executive of working memory. Working memory involves the temporary storage of information 'in mind', while processing the same or other information. Phonological memory (or verbal working memory) deteriorates with age in males, while visual-spatial memory is not found to be directly related to age. Males often experience an impairment in the functioning of the phonological loop. The CGG length is significantly correlated with central executive and the visual–spatial memory through regression analysis. However, in a premutation individual, CGG length is only significantly correlated with the central executive, not with either phonological memory or visual–spatial memory.[13]

Current evidence shows that individuals with premutation have difficulties with mathematics, anxiety, attention, and/or executive functions.[citation needed] Premutation is the stage where the CGG sequence in the FMR-1 gene expands to contain between 54 and 230 repeats. There is also a decrease in measures of executive cognitive functioning, working memory and information processing speed. The relative weaknesses observed in performance IQ can be partly attributed to slowed motor performance as a result of intention tremor. Children with FXS have an intellectual learning rate which is 2.2 times slower than unaffected children.[14]

There is overlap of behavioral and clinical symptomology between autism and FXS. The commonalities include social and communication skills, though the degree to which these two syndromes share the processes and stages of development and medical causes for the disease (etiology) is not known.[15] Research has shown that phenotype ‘commonalities’ reflected different developmental pathways that diverge over time and across syndromes.

Using this information will permit early and specialized interventions. These earlier interventions will allow for optimal development and show educational, clinical, and adaptive benefits in the patient. When both autism and FXS are present a severe language deficit and lower IQ is observed as compared to children with only FXS.[16]

Children with fragile X have very short attention spans, are hyperactive, and show hypersensitivity to visual, auditory, tactile, and olfactory stimuli. These children have difficulty in large crowds due to the loud noises and this can lead to tantrums due to hyperarousal. Children with FXS pull away from light touch and can find textures of materials to be irritating. Transitions from one location to another can be difficult for children with FXS. Behavioral therapy can be used to decrease the child’s sensitivity in some cases.[9]

Perseveration is a common communicative and behavioral characteristic in FXS. Children with FXS may repeat a certain ordinary activity over and over. In speech, the trend is not only in repeating the same phrase but also talking about the same subject continually. Cluttered speech and self-talk are commonly seen. Self-talk includes talking with oneself using different tones and pitches.[9]

Eye problems have not been found to develop in accordance with mental age in individuals with fragile X. But patients with the syndrome have showed delayed voluntary orienting. The group differences in reflexive orienting between individuals with Down and fragile X syndrome at the low mental age level reinforce the practice of separating etiologies and highlight the contribution of basic attentional processes in the study of people with mental limitations.

According to a study of patients with fragile X premutation undergoing preimplantation genetic diagnosis (PGD), there is a positive correlation between number of CGG repeats and estradiol level, retrieved oocytes and two-pronuclear zygotes.[17] Premutation carriers with <100 CGG repeats suffer from impaired ovarian response and decreased fertilization rate.[17]

Fragile X syndrome was originally diagnosed by culturing cells in a folate deficient medium and then assessing the cultures for X-chromosome "breakage" by cytogenetic analysis of the long arm of the X-chromosome (the appearance of a broken chromosome being caused by discontinuity of staining in the region of the trinucleotide repeat). This technique proved unreliable for both diagnosis and carrier testing.

The fragile X abnormality is now directly determined by analysis of the number of CGG repeats and their methylation status using restriction endonuclease digestion and Southern blot analysis.

From Dr. Randi Hagerman's statement to the United States House of Representatives Subcommittee on Health and Environment: "...Fragile X represents a portal through which we hope to view and treat a wide variety of other disorders of brain development and function. All children with autism...should be tested for Fragile X."

Normally, the FMR1 gene contains between 6–55 (29 in Robbins–Kumar pathology textbooks) repeats of the CGG codon (trinucleotide repeats). In people with the fragile X syndrome, the FMR1 allele has over 230–4000 repeats of this codon.[24]

Expansion of the CGG repeating codon to such a degree results in a methylation of that portion of the DNA, effectively silencing the expression of the FMR1 protein.

This methylation of the FMR1 locus in chromosome band Xq27.3 is believed to result in constriction of the X chromosome which appears 'fragile' under the microscope at that point, a phenomenon that gave the syndrome its name.

Mutation of the FMR1 gene leads to the transcriptional silencing of the fragile X-mental retardation protein, FMRP. In normal individuals, FMRP is believed to regulate a substantial population of mRNA: FMRP plays important roles in learning and memory, and also appears to be involved in development of axons, formation of synapses, and the wiring and development of neural circuits.[25]

Because males normally have only one copy of the X-chromosome, those males with significant trinucleotide expansion at the FMR1 locus are symptomatic. They are intellectually disabled and may show various physical features of the fragile X syndrome.

Females have two X-chromosomes and thus have an increased probability of having a working FMR1 allele. Females carrying one X-chromosome with an expanded FMR1 gene can have some signs and symptoms of the disorder or be normal. Although the extra X-chromosome can serve as a backup, only one X-chromosome is active in each cell due to X-inactivation.

Although several medications have been proposed to treat fragile X syndrome, none of them are supported by good evidence.[27] While there is no current cure for the syndrome, there is hope that further understanding of its underlying causes would lead to new therapies. Currently, the syndrome can be treated through behavioral therapy, special education, and when necessary, treatment of physical abnormalities. Persons with the fragile X syndrome in their family histories are advised to seek genetic counseling to assess the likelihood of having children who are affected, and how severe any impairments may be in affected descendants.[28]

Recent studies have focused on a number of critical areas. The role of FMRP's RNA partners, many of which have now been validated through in vitro assays, is of primary importance. Also being examined is the function the various domains of FMRP, an RNA-binding protein, which is still relatively unknown. One hypothesis is that many symptoms are caused by unchecked activation of mGluR5, a metabotropic glutamate receptor, which was found in a 2007 study to contribute significantly to the pathogenesis of the disease;[29] this suggests that mGluR5 blockers could be used to treat fragile X syndrome.[30][31]