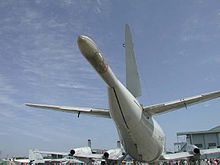 The SH-60B Seahawk helicopter carries a yellow and red towed MAD array known as a ‘MAD bird’, seen on the aft fuselage.

A magnetic anomaly detector (MAD) is an instrument used to detect minute variations in the Earth's magnetic field. The term refers specifically to magnetometers used by military forces to detect submarines (a mass of ferromagnetic material creates a detectable disturbance in the magnetic field); the military MAD gear is a descendent of geomagnetic survey instruments used to search for minerals by the disturbance of the normal earth-field.

Geoexploration by measuring and studying variations in the Earth's magnetic field has been conducted by scientists since 1843. The first uses of magnetometers were for the location of ore deposits. Thalen's 'The Examination of Iron Ore Deposits by Magnetic Measurements', published in 1879, was the first scientific treatise describing this practical use.[1]

Magnetic anomaly detectors employed to detect submarines during World War II harnessed the fluxgate magnetometer, an inexpensive and easy to use technology developed in the 1930s by Victor Vacquier of Gulf Oil for finding ore deposits.[2][3] MAD gear was used by both Japanese and U.S. anti-submarine forces, either towed by ship or mounted in aircraft to detect shallow submerged enemy submarines. The Japanese called the technology jikitanchiki(磁気探知機, "Magnetic Detector"). After the war, the U.S. Navy continued to develop MAD gear as a parallel development with sonar detection technologies.

Satellite, near-surface and oceanic data from detectors was used to create the World Digital Magnetic Anomaly Map published by the Commission for the Geological Map of the World (CGMW) in July 2007.

To reduce interference from electrical equipment or metal in the fuselage of the aircraft, the MAD sensor is placed at the end of a boom or a towed aerodynamic device. Even so, the submarine must be very near the aircraft's position and close to the sea surface for detection of the change or anomaly. The size of the submarine and its hull composition determine the detection range. MAD devices are usually mounted on aircraft.

There is some misunderstanding of the mechanism of detection of submarines in water using the MAD boom system. Magnetic moment displacement is ostensibly the main disturbance, yet submarines are detectable even when oriented parallel to the Earth's magnetic field, despite construction with non-ferromagnetic hulls. For example, the Soviet-Russian Alfa class submarine, whose hull is constructed out of titanium to give dramatic submerged performance and protection from detection by MAD sensors, is still detectable.

This is due in part to the fact that even submarines with titanium hull will still have a substantial content of ferromagnetic materials as the nuclear reactor, steam turbines, auxiliary diesel engines and numerous other systems will be manufactured from steel and nickel alloys.

For geomagnetic survey work the detector can be mounted on a long probe in front of the aircraft or be a towed device. A chart is produced that geologists can study to determine the location and extent of mineral deposits.

During the Vietnam War the original AC-130A Spectre gunships and the A-6C Intruder employed the "Pave Mace"/"Black Crow" magnetic anomaly detection system to detect truck ignition coils in vehicles hidden under heavy jungle canopies. When the electric current flowing through such a coil changes it produces a magnetic flux, which is, in simplest terms, a change in the magnetic field over a given area. In particular, when the trucks were turned on the current flowing through the coils went from zero to some maximum, producing a large and easily detectable flux.[citation needed]