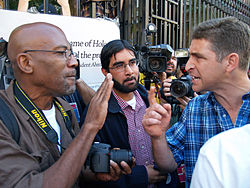 People often use gestures during heated or tense arguments, such as at this political demonstration.

Gestures are a form of nonverbal communication in which visible bodily actions are used to communicate particular messages, either in place of speech or together and in parallel with spoken words.[1] Gestures include movement of the hands, face, or other parts of the body. Physical non-verbal communication such as purely expressive displays, proxemics, or displays of joint attention differ from gestures, which communicate specific messages.[1] Gestures are culture-specific and can convey very different meanings in different social or cultural settings.[2] Although some gestures, such as the ubiquitous act of pointing, differ little from one place to another, most gestures do not have invariable or universal meanings but connote specific meanings in particular cultures. A single emblematic gesture can have very different significance in different cultural contexts, ranging from complimentary to highly offensive.[3]

This list includes links to Wikipedia pages that discuss particular gestures, as well as short descriptions of some gestures that do not have their own page. 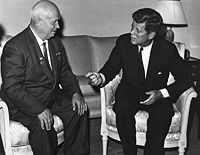 The "fig sign" is an ancient gesture with many uses. 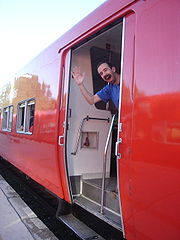 Gestures made with other body parts