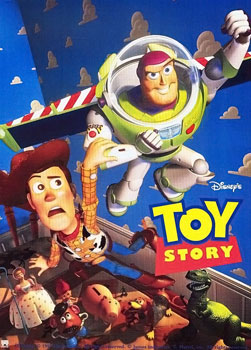 
"Toy Story" is a 1995 American computer-generated , directed by and starring and . The film was produced by Pixar Animation Studios and . It was written by , , Joel Cohen, and Alec Sokolow, and featured music by .

The top-grossing film on its opening weekend,

In addition to releases, "Toy Story"-inspired merchandise has run the gamut from and costumes to and shoes. [cite news|first=Robert|last=Scally|title='Toy Story rivals 'The Lion King' for merchandising muscle - home video|url=http://findarticles.com/p/articles/mi_m3092/is_n19_v35/ai_18752351|work=Discount Store News|date=1996-10-07|accessdate=2008-06-24] Buzz Lightyear's classic line "To infinity and beyond!" has seen usage not only on T-shirts, but among philosophers and mathematical theorists as well. [cite book|last=Dusek|first=Val|year=2006|title=Philosophy of Technology: An Introduction|pages=59|publisher=Blackwell Publishing|id=ISBN 1405111631] The film was so successful it prompted a sequel, "". "Toy Story" is set for re-release in stereoscopic 3D on , and "" is scheduled for release on . [cite news|first=Marc|last=Graser|title='Toy Story' gets 3D makeover|url=http://www.variety.com/article/VR1117979561.html?categoryid=1050&cs=1|work=Variety |date=2008-01-24|accessdate=2008-06-24]

This film was rated by the , and PG by the .

Old-fashioned doll Woody is coordinating a mission around his owner Andy's birthday party in the days before Andy's family move to their new house. To Woody's dismay, Andy receives a new in the form of space ranger , whose impressive features soon see Buzz replacing Woody as Andy's favorite toy. Woody - the former de facto leader of Andy's toys - is dismayed by his replacement and resentful towards Buzz. For his part, Buzz does not understand that he is a toy. Instead he believes himself to be an actual space ranger, seeing Woody as an interference in his "mission"; he also believes his gadgets, such as his plastic wings and light bulb laser, are real and fully functional. When Woody challenges him to fly, he attempts to do so and gets temporarily caught on the toy airplane hanging from the ceiling, making it appear as though he can fly. This allows Buzz to continue believing he can fly and convinces the other toys as well, despite Woody dubbing his performance "falling with style".

Later, Woody schemes to trap Buzz in a gap behind Andy's desk so he can replace Buzz on a family outing, but the plan goes disastrously wrong and Buzz is knocked out of Andy's room into the driveway outside. The other toys accuse Woody of attempting to Buzz out of , but are unable to punish him before Andy leaves the house with Woody for the outing at the space-themed Pizza Planet restaurant. Buzz sees Andy getting into his mother's car with Woody and manages to climb aboard, where he confronts Woody while Andy's mother refuels the car. The two start a fight and accidentally land outside the car, which drives off and leaves the two stranded.

Woody spots a truck bound for Pizza Planet and plans to rendezvous with Andy there. Realizing that he will face the wrath of the other toys if he returns without Buzz, Woody convinces Buzz that the truck will take them to a spaceship. Once at Pizza Planet, Buzz makes his way into a machine shaped like a spaceship, thinking it to be the ship Woody promised him. While Woody clambers in to try and rescue him, Buzz (with Woody hanging on to his foot) is captured by Andy's next-door neighbor, the toy-destroying Sid Phillips.

The two desperately attempt to escape from Sid's house before Andy's family's moving day. There they encounter nightmarish "mutant" toys inhabiting his room, as well as Sid's vicious dog Scud. Buzz, hiding in the living room, sees a for Buzz Lightyear toys just like himself. Disheartened and in denial of his true nature, Buzz attempts to fly but falls and breaks his arm from its socket. While Sid prepares to destroy Buzz with a firework , Woody is unable to get a miserable Buzz to participate in his escape plan, even when the mutant toys show their true colors and repair Buzz's arm. In the film's turning point, Woody admits that Buzz is a "cool toy", but despairs that he himself stands no chance of being Andy's favorite. Buzz changes his mind and decides that life is worth living even if he's not a space ranger and helps Woody, but Sid wakes up before they can escape and takes Buzz (still strapped to the rocket), to his backyard launchpad. In cooperation with Sid's mutant toys, Woody stages a rescue of Buzz and simultaneously terrifies Sid into running away in fear of his own toys. But even after their efforts, the two miss Andy's car as it drives away to his new house.

Chasing the moving van, they attract the attention of Scud. Buzz saves Woody by tackling the dog, but dooms himself. Woody attempts to rescue Buzz with Andy's R.C. At first, the the other toys in the moving van mistakenly believe Woody is attempting to now kill R.C., and throw him off the truck despite his attempts to tell them the truth. Buzz and Woody attempt to catch up; after witnessing Woody trying to save Buzz, the other toys realize the truth and try to help them back on, but R.C.'s batteries die and their attempt fails. Woody then remember's Buzz's rocket, and attempts to light it with the match he received from Sid. Although a passing car blows out the match, Woody still figures out a way to light the fuse; using Buzz's helmet to magnify the sun. It is only after he lights it that he remembers the rocket will explode at the end of the flight. The rocket takes off, easily catching up to the van. But although they manage to drop R.C. back in with the other toys, the rocket shoots straight up before Buzz and Woody do anything to make it themselves. But right before it explodes, Buzz deploys his wings, separating them from the rocket, and allowing them to glide through the air. Woody, amazed, declares "Buzz, you're flying!" and, Buzz answers "This isn't flying, this is falling...with style!". The toys glide past the van, aiming for Andy's car instead. Buzz drops through the sun roof and lands in a box right next to Andy, who is overjoyed to rediscover his two favorite toys.

At , a reconciliated Buzz and Woody are now both Andy's favorite toys and have become best friends, inspiring confidence among the other toys. Together they stage another reconnaissance mission to determine the threat, if any, presented by the new arrivals - one of which is revealed to be a .

John Lasseter's first experience with computer animation was during his work as an animator at Disney, when two of his friends showed him the lightcycle scene from . It was an eye-opening experience which awakened Lasseter to the possibilities offered by the new medium of computer-generated animation. [Paik, Karen (2007). "To Infinity and Beyond!: The Story of Pixar Animation Studios", pp.80-107. Chronicle Books, San Francisco. ISBN-10 0811850129 .] Lasseter went on to work at and later as a founding member of Pixar.

Pixar's Oscar-winning short film (directed by Lasseter) and its CAPS project were among works that gained Disney's attention and, after meetings in 1990 with , Pixar pitched a television special called "A Tin Toy Christmas". By 1991, Disney and Pixar signed an agreement to work on a film, based on the Tin Toy characters, called "Toy Story". [cite news|url=http://money.cnn.com/2006/05/15/magazines/fortune/pixar_futureof_fortune_052906/index.htm|title=Pixar's magic man|last=Schlender|first=Brent|date=2006-05-17|publisher=CNNMoney.com|accessdate=2008-10-10]

The script went through many changes before the final version. Lasseter decided Tinny was "too antiquated", and the character was changed to a military action figure, and then given a space theme. Tinny's name changed to Lunar Larry, then Tempus from Morph, and eventually Buzz Lightyear (after astronaut ).

A second character, originally a ventriloquist's dummy, was changed to a stuffed cowboy doll with a pull-string, and named Woody for Western actor . The difference between the old and new toy led to a conflict between their personalities.

Toy Story's script was strongly influenced by the ideas of screenwriter . The movie became a , with the story department drawing inspiration from films such as and . Disney also appointed , and, later, to help develop the script.

It was Whedon's idea to incorporate as a character who would rescue Woody and Buzz in the film's final act. The idea was dropped after Mattel objected and refused to license the toy. Hasbro likewise refused to license but did license .

Lasseter always wanted Tom Hanks to play the character of Woody. Early test footage, using Hanks' voice from , convinced Hanks to sign on to the film. was approached to play Buzz, but turned down the role, as did on his agent's advice. [cite web|url=http://www.imdb.com/name/nm0000331/bio|title=Chevy Chase biography at IMDb|publisher=IMDb|accessdate=2008-10-10] Katzenberg took the role to Tim Allen, who was appearing in Disney's Home Improvement, and he accepted.

Pixar presented an early draft of the film to Disney on November 19, 1993. The result was disastrous: Walt Disney Feature Animation president immediately shut down production pending a new script approved by Disney. Pixar survived the shutdown by falling back on its existing television commercial business while the script was rewritten. The new script made Woody a more likeable character, instead of the "sarcastic jerk" he had been. Katzenberg restarted production in February 1994.

The movie's related toys were produced by , who secured the worldwide master toy license in 1995. [cite web|url=http://www.thinkwaytoys.com/companyinfo/companyinfo_history.htm|title=Company Info - History|publisher=Thinkway Toys|accessdate=2008-10-10]

In , the ranked the film as the greatest animated film of all time.

received an in "for the development and inspired application of techniques that have made possible the first feature-length computer-animated film." [cite web|url=http://www.imdb.com/name/nm0005124/awards|title=John Lasseter - Awards|author=IMDb|authorlink=Internet Movie Database]

*Story by , , and
*Performed by and
*Music by
*Supervising Technical Director
*Executive Producers and

References to other Pixar films

Real products that appear in the film

* as : An old-fashioned pull-string cowboy doll who is Andy's favorite toy. Andy's other toys view him as their leader.
* as : A new and popular who begins to rival Woody as Andy's favorite toy and as the most popular toy in Andy's room.
* as : A cynical toy, based on Playskool's popular toy.
* as : One of Woody's closest friends and his slightly brown-nosed second in command.
* as : An inept, insecure figure.
* as : A wise-cracking who gets involved in all of the other toys' affairs.
* as : Woody's love interest; a porcelain figure who is the voice of reason among Andy's toys.
* as Sarge: The head of Andy's and a model of military discipline and precision.

Cameo vocals include , Sam Lasseter, (as Lenny, the pair of wind-up walking binoculars), and .

All of these titles are significant, because Pixar created original animations for all of them, including fully animated sequences for the PC titles.