Dedham is a village within the borough of Colchester in northeast Essex, England, situated on the River Stour and on the border of Essex and Suffolk. The nearest town to Dedham is the small market town of Manningtree.

Dedham is frequently rated as containing some of England's most beautiful Lowland landscape, most particularly the Water Meadows of the River Stour, which passes along the northern boundary of the village forming the boundary between the counties of Essex and Suffolk. Dedham has a central nuclear settlement around the Church and the junction of Mill Lane and the High Street (forming the B1029). Connected to Dedham are the hamlets of The Heath and Lamb Corner. The village forms a key part of the Dedham Vale. 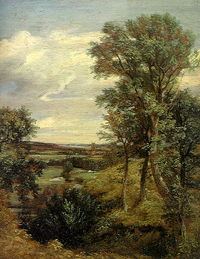 Dedham is at the heart of 'Constable Country' - the area of England where Constable lived and painted. Constable attended the town's Grammar School (now the 'Old Grammar School' and 'Well House'), and he would walk to school each morning alongside the River Stour from his family's home in East Bergholt. Many of Constable's paintings feature Dedham, including Dedham Mill, which his father owned, and Dedham Parish Church, whose massive Caen stone and flint tower is a focal point of the surrounding Dedham Vale.

In 1937, Cedric Morris and Arthur Lett-Haines founded the East Anglian School of Painting and Drawing at Dedham. When, however, this burnt down, they moved to Hadleigh, Suffolk.

Of longer influence in Dedham was horse painter, Sir Alfred Munnings who became President of the Royal Academy. His house in Dedham, Castle House, now contains a gallery of his work, and his studio.

Tom Keating, the art restorer and famous art forger, was a Dedham resident until his death in 1984. He is buried in the churchyard of Dedham Parish Church (Website).

Formerly a rich wool town and market town, Dedham is now still a flourishing commercial village, housing a post office, butcher, Co-op, grocers, delicattessen, art shop and various other shops.[2] Agriculture is also important with mainly arable land (sugar beet and wheat) but also cattle grazing on the water meadows and some sheep on Grove Hill. There is an industrial estate near the A12, the main road which passes through the West of the village. A Business Centre and Nursing Home have recently opened.

Transport within Dedham can be done entirely by foot or bicycle. Manningtree can easily be accessed by bicycle or by walking along the banks of the River Stour. Manningtree provides regular, fast commuter services to London and Norwich. Colchester can be reached by bus. School buses service all the schools in Colchester and the independent schools in Ipswich.

Dedham is the ancestral home of General William Tecumseh Sherman, of American Civil War fame, whose ancestors emigrated to Massachusetts in the 1630s.[8]

Birthplace of William Haggar (1851-1925), whose pioneering work with film at the start of the twentieth century made him one of Britain's foremost directors.

Osborne Reynolds, (1842-1912), engineer and physicist, who developed the understanding of electricity, magnetism, and fluid flow (part of the equation for determining the change between 'streamline' and 'turbulent' flow is still called a 'Reynold's Number'), was the son of a headmaster of Dedham Grammar School.