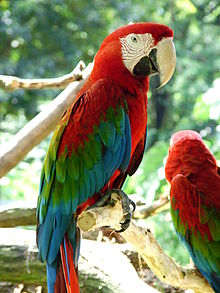 The red-and-green macaw eats clay from exposed riverbanks, allowing it to utilize nutrients in harmful foods.

Geophagy is the practice of eating earthy or soil-like substances such as clay, and chalk. It exists in animals in the wild and also in humans, most often in rural or preindustrial societies among children and pregnant women.[1] Human geophagy may be related to pica, a classified eating disorder in the DSM-IV characterized by abnormal cravings for nonfood items.[2]

Geophagy is extremely widespread in the animal kingdom. Galen, the famous Greek philosopher and physician, was the first to record the use of clay by sick or injured animals back in the second century AD. This type of geophagy has been documented in "many species of mammals, birds, reptiles, butterflies and isopods, especially among herbivores."[3]

Geophagy is well documented in birds. Notably, many species of South American parrots have been observed at clay licks, whilst Sulphur-crested Cockatoos have been observed ingesting clays in Papua New Guinea (Discover, 1998) as well as in Glenbrook in Blue Mountains of Australia (Parrots Magazine, 2000). Analysis of most soils consumed by wild birds show that they prefer soils with high clay content, often with the smectite and bentonite clay families being well represented. In vitro and in vivo tests of these soils indicate that they release biologically important quantities of minerals like calcium and sodium, as well as absorbing substantial quantities of small charged compounds such as alkaloids. Because the clays release minerals and absorb other cations as part of the same process of cation exchange, it remains challenging to determine which function is the more important motivator in any given instance of avian geophagy. Separate from soil ingestion, pet birds are often provided with grit which is retained in their gizzards to aid in grinding the food they eat.

"The oldest evidence of geophagy practised by humans comes from the prehistoric site at Kalambo Falls on the border between Zambia and Tanzania (Root-Bernstein & Root-Bernstein, 2000)." Here, a calcium-rich white clay was found alongside the bones of Homo habilis (the immediate predecessor of Homo sapiens).[4]

Geophagy is nearly universal around the world in the tribal and traditional rural societies (although apparently it has not been documented in Japan and Korea). Also, the eating of clay (a form of geophagy) has been documented in historical sources beginning with Ancient Mesopotamia and Egypt. (Also see under medicinal clay.)

Geophagy was practised by Native Americans in California and Peru who would eat earth with acorns and potatoes to neutralize potentially harmful alkaloids. Clay was used in the production of acorn bread in California and Sardinia, Italy.

While geophagy is most often seen in tribal and rural societies among children and pregnant women, it is practiced by members of all races, social classes, ages, and sexes. In some parts of the world, geophagia is a culturally sanctioned practice. In many parts of the developing world, earth intended for consumption is available for purchase.

In parts of Africa, rural areas of the United States, and villages in India, clay consumption is correlated with pregnancy and some women eat clay to eliminate nausea, possibly because the clay coats the gastrointestinal tract and may absorb dangerous toxins. The clay may also provide critical calcium for fetal development (Vermeer).

In Haiti, the poorest economy in the Western Hemisphere, geophagy is widespread. The clay mud is worked into what looks like pancakes or cookies, called "bon bon de terres" (Earthy bon bons), that are dried in the sun and sold throughout the poorer areas. Small amounts of other ingredients, vegetable shortening, salt and sometimes sugar, are also added to the mix. The cookies have little or no nutritional value and are associated with various health problems.[5][6]

While in the US and Europe the practice has often been stigmatized, this is not necessarily so in other parts of the world. Most non-Western societies consider geophagy to be an adaptive, beneficial, and nutritional approach to promote health. There is a trend in recent scientific research to study geophagy not as a pathology, but rather as an adaptive behaviour that supplements the diet with essential nutrients or treats a disorder such as diarrhea.[7]

Geophagy in the United States

According to "Dixie's Forgotten People: the South's Poor Whites", by J. Wayne Flynt, geophagy was quite common among poor whites in the South-eastern United States. In the 19th and early 20th centuries, this was often ridiculed in popular literature. The literature also states that "Many men believed that eating clay increased sexual prowess, and some females claimed that eating clay helped pregnant women to have an easy delivery."[9] Geophagy being a common practice among southerners may have been caused by the high prevalence of hookworm disease, in which the desire to consume soil is a symptom.[10] Geophagy was common among slaves who were nicknamed "clay-eaters" because they had been known to consume clay, as well as spices, ash, chalk, grass, plaster, paint, and starch.[11] The author cites a recent survey by Obstetrics-Gynecology Clinic at Duke Medical Center in North Carolina, according to which one quarter of patients were clay-eaters.

Edible clay is still available for sale in the American rural South.[12][13] Clays like activated attapulgite and diosmectite have been used in the active ingredient in over-the-counter antidiarrheal medications. The US version of Kaopectate, for example, contained kaolinite clay until a reformulation in 2003.[14]

The Western view of dirt as impure and contaminated [15] may also explain negative connotation and repulsion with geophagy. Geophagy also has a stigma of being an eating habit of African slaves and poor African-Americans. The Victorian ethic is also amongst the reasons that geophagy became stigmatized in American culture. An ability to control appetite coupled with eating seldom was the appropriate measure of behaviour in a "civilized" Victorian culture, so acting upon a craving for dirt was considered uncivilized because it was seen as having a lack of self-control.[16]

In the past, women who wanted to become pregnant followed the eating patterns of successful mothers instead of changing their diet according to medical studies and recommendations. As a result, geophagy has continued to pass from generation to generation. Cooked, baked, and processed dirt and clay are sold in health food stores and rural flea markets in the South. Researchers have noticed that geophagy is not as prevalent as it once was as rural Americans assimilate into urban culture. In order for geophagy to remain a part of American culture, more effective marketing strategies need to be implemented that fit into modern American culture.[17]

The cultural meaning of dirt may be another factor that contribute to making geophagy an unacceptable practice in some cultures. Western cultures view dirt as being filthy, especially after the rise of germ theory. Dirt is similar to miasma, in that theory, which is a place where diseases are made and spread. Eating the miasma would be viewed as unclean and unhealthy, if not suicidal.

Furthermore, one overarching theme of Western culture is a distancing from the natural world and progress toward technology and efficiency. This movement would render geophagy unacceptable to Westerners. Evidence for this comes from the English language, with phrases like "dirt cheap" and "dirty dog". In non-western cultures, soil is thought of as being a provider for the Earth to grow, and therefore it has nutrients which can be absorbed. It came from a/the god(s) and nourishes the crops which feed the culture. In these cultures, the acceptance is not only seen by secluded tribes, but it is also accepted into the market and into families.

The persistence of geophagy within a family or community can also partially be explained by a simple mother/daughter sharing mechanism. A crucial and sometimes hazardous part of rural communities is the act of giving birth. Without advanced medical knowledge, local customs become key to a healthy outcome. Geophagy enters the picture when daughters would "follow the diet of a woman that they knew had been successful at giving birth".[citation needed]The maternal chain can therefore act as an important vector in the continuance of this act. The practice, in truth, is important because it does provide much needed minerals to the human body. Indeed, Western cultures have continued the practice of geophagy, but only under the guise of vitamins and minerals.

In a Science Digest article (Paraquat: a Potent Weed Killer is Killing People[18]), it is recommended that a paraquat poisoning victim promptly swallow dirt, even at the risk of salmonella, because paraquat is deactivated upon contact with soil. Otherwise, a sufficiently lethal dose would cause damage to the liver, kidneys, and especially the lungs, usually causing death by asphyxiation by causing severe fibrosis. Lung transplants in two victims merely delayed their deaths because chemical levels still in their bodies subsequently damaged the transplanted lungs, too.

There is also evidence that supports the usefulness of the flora found in soil. Some have even suggested that it is useful, if not vital, in the establishment of healthy bacteria within the digestive tract, addressing the problems presented by Crohn's Disease and Leaky Gut Syndrome. Highly adsorbent families of clays have been demonstrated to cause the lining of the vertebrate gut to change both on a cellular and acellular level, potentially protecting the gut from chemical insults as well as alleviating ailments such as esophagitis, gastritis, and colitis.[citation needed]

Chimpanzees in Kibale National Park, Uganda, have been observed to consume soil rich in kaolinite clay shortly before or after consuming plants including Trichilia rubescens, which possesses antimalarial properties in the laboratory. Simulated mastication and digestion reveals that the clay helps to release active antimalarial components from the leaves. The same type of soil is used by local healers to treat diarrhea,[19] presumably by the same mechanism as over-the-counter antidiarrheal preparations.

There are obvious risks in the consumption of earth that is contaminated by animal or human feces; in particular, parasite eggs, such as roundworm, that can stay dormant for years, can present a problem. Tetanus poses a further risk. Nevertheless, these risks are generally well understood by most tribal populations that engage in geophagy, hence 'clean' earth from below the surface level is sought out. Children's predilection to engage in geophagy makes them more susceptible to worm infestations. Other dangers associated with geophagia include damage to tooth enamel, the ingestion of a variety of bacteria, various forms of soil contamination, and intestinal obstruction.

In the traditional societies, there is a widespread practice to heat-treat (bake) the earth before consumption, and this tends to mitigate the risks to some extent.

There is a psychological hypothesis, which is centered around the craving ideas, reported by clay eaters. The researchers attention was directed mainly towards the pregnant and postpartum women and their emotional state. Geophagy was attributed to feelings of misery, homesickness, depression, and alienation.[11]