Obstetrics (from the Latin obstare, "to stand by") is the medical specialty dealing with the care of all women's reproductive tracts and their children during pregnancy (prenatal period), childbirth and the postnatal period. Veterinary obstetrics is the same concept for veterinary medicine although theriogenology is more commonly used term that includes obstetrics, gynecology, and andrology. Almost all modern obstetricians are also gynaecologists.

Prenatal care is important in screening for various complications of pregnancy. This includes routine office visits with physical exams and routine lab tests:

genetic screening for downs syndrome (trisomy 21) and trisomy 18 the national standard in the United States is rapidly evolving away from the AFP-Quad screen for downs syndrome- done typically in the second trimester at 16–18 weeks. The newer integrated screen (formerly called F.A.S.T.E.R for First And Second Trimester Early Results) can be done at 10 plus weeks to 13 plus weeks with an ultrasound of the fetal neck (thick skin is bad) and two chemicals (analytes) Papp-a and bhcg (pregnancy hormone level itself). It gives an accurate risk profile very early. There is a second blood screen at 15 to 20 weeks which refines the risk more accurately. The cost is higher than an "AFP-quad" screen due to the ultrasound and second blood test but it is quoted to have a 93% pick up rate as opposed to 88% for the standard AFP/QS. This is an evolving standard of care in the United States.

Most doctors do a sugar load in a drink form of 50 grams of glucose in cola, lime or orange and draw blood an hour later (plus or minus 5 minutes) ; the standard modified criteria have been lowered to 135 since the late 1980s

On the first visit to her obstetrician or midwife, the pregnant woman is asked to carry out the antenatal record, which constitutes a medical history and physical examination. On subsequent visits, the gestational age (GA) is rechecked with each visit.

Symphysis-fundal height (SFH; in cm) should equal gestational age after 20 weeks of gestation, and the fetal growth should be plotted on a curve during the antenatal visits. The fetus is palpated by the midwife or obstetrician using Leopold maneuver to determine the position of the baby. Blood pressure should also be monitored, and may be up to 140/90 in normal pregnancies. High blood pressure indicates hypertension and possibly pre-eclampsia, if severe swelling (edema) and spilled protein in the urine are also present.

Fetal screening is also used to help assess the viability of the fetus, as well as congenital problems. Genetic counseling is often offered for families who may be at an increased risk to have a child with a genetic condition. Amniocentesis at around the 20th week is sometimes done for women 35 or older to check for Down's Syndrome and other chromosome abnormalities in the fetus.

Even earlier than amniocentesis is performed, the mother may undergo the triple test, nuchal screening, nasal bone, alpha-fetoprotein screening and Chorionic villus sampling, also to check for disorders such as Down Syndrome. Amniocentesis is a prenatal genetic screening of the fetus, which involves inserting a needle through the mother's abdominal wall and uterine wall, to extract fetal DNA from the amniotic fluid. There is a risk of miscarriage and fetal injury with amniocentesis because it involves penetrating the uterus with the baby still in utero. 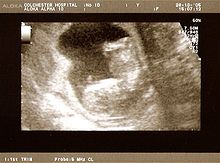 Imaging is another important way to monitor a pregnancy. The mother and fetus are also usually imaged in the first trimester of pregnancy. This is done to predict problems with the mother; confirm that a pregnancy is present inside the uterus; estimate the gestational age; determine the number of fetuses and placentae; evaluate for an ectopic pregnancy and first trimester bleeding; and assess for early signs of anomalies.

X-rays and computerized tomography (CT) are not used, especially in the first trimester, due to the ionizing radiation, which has teratogenic effects on the fetus. No effects of magnetic resonance imaging (MRI) on the fetus have been demonstrated,[2] but this technique is too expensive for routine observation. Instead, ultrasound is the imaging method of choice in the first trimester and throughout the pregnancy, because it emits no radiation, is portable, and allows for realtime imaging.

Ultrasound imaging may be done at any time throughout the pregnancy, but usually happens at the 12th week (dating scan) and the 20th week (detailed scan).

A normal gestation would reveal a gestational sac, yolk sac, and fetal pole. The gestational age can be assessed by evaluating the mean gestational sac diameter (MGD) before week 6, and the crown-rump length after week 6. Multiple gestation is evaluated by the number of placentae and amniotic sacs present.

The main emergencies include:

Ultrasound is routinely used for dating the gestational age of a pregnancy from the size of the fetus, the most accurate dating being in first trimester before the growth of the fetus has been significantly influenced by other factors. Ultrasound is also used for detecting congenital anomalies (or other fetal anomalies) and determining the biophysical profiles (BPP), which are generally easier to detect in the second trimester when the fetal structures are larger and more developed. Specialised ultrasound equipment can also evaluate the blood flow velocity in the umbilical cord, looking to detect a decrease/absence/reversal or diastolic blood flow in the umbilical artery.

Other tools used for assessment include:

Induction is a method of artificially or prematurely stimulating labour in a woman. Reasons to induce can include pre-eclampsia, placental malfunction, intrauterine growth retardation,[3] and other various general medical conditions, such as renal disease. Induction may occur any time after 34 weeks of gestation if the risk to the fetus or mother is greater than the risk of delivering a premature fetus regardless of lung maturity.

Induction may be achieved via several methods:

During labor itself, the obstetrician/doctor/intern/medical student under supervision may be called on to do a number of tasks. These tasks can include:

A woman in the Western world who is delivering in a hospital may leave the hospital as soon as she is medically stable and chooses to leave, which can be as early as a few hours postpartum, though the average for spontaneous vaginal delivery (SVD) is 1–2 days, and the average caesarean section postnatal stay is 3–4 days. During this time the mother is monitored for bleeding, bowel and bladder function, and baby care. The infant's health is also monitored.[4]

• Care provided to the mother following parturition. Certain things must be kept in mind as the physician proceeds with the post-natal care.