His mother gave him what would be the Free County of Burgundy around Dôle in 982. Otto also inherited the duchy of Burgundy on the other side of the Saône in 1002 from his stepfather Eudes Henry the Great. The duchy then corresponded to the diocese of Besançon in the Holy Roman Empire. He was also Count of Mâcon in France.

Burgundy was annexed to the crown of France by King Robert II in 1004. Determined to be sovereign ruler of his own lands, Otto revolted against the Emperor Henry II in 1016. This was after Rudolph III of Burgundy, the last king of that realm, had done homage to Henry at Strasbourg making him his guard and heir. On Otto's death, the Free County fell under the suzerainty of the German emperors. 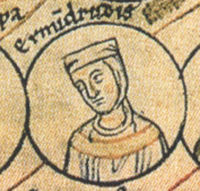 His first wife was Ermentrude, daughter of Count Renaud of Rheims (Renaud of Roucy).

They had two sons and three daughters:

Otto married the four-times widowed Adelaide of Anjou late in life and they had no known children.