Butane is a gas with the formula C4H10 that is an alkane with four carbon atoms. The term may refer to any of two structural isomers, or to a mixture of them: in the IUPAC nomenclature, however, butane refers only to the unbranched n-butane isomer; the other one being called "methylpropane" or isobutane.

Butanes are highly flammable, colorless, easily liquefied gases. The name butane comes from the roots but- (from butyric acid) and -ane.

When oxygen is plentiful, butane burns to form carbon dioxide and water vapor; when oxygen is limited, carbon (soot) or carbon monoxide may also be formed.

n-Butane is the feedstock for DuPont's catalytic process for the preparation of maleic anhydride:

n-Butane, like all hydrocarbons, undergoes free radical chlorination providing both 1-chloro- and 2-chlorobutanes, as well as more highly chlorinated derivatives. The relative rates of the chlorination is partially explained by the differing bond dissociation energies, 425 and 411 kJ/mol for the two types of C-H bonds. The two central carbon atoms have the slightly weaker C-H bonds. 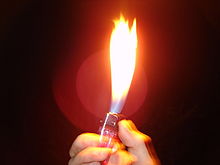 Butane lighter in use 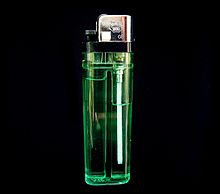 The most common use of butane is as lighter fuel for a common lighter or butane torch. 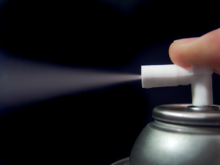 Butane being sprayed from an aerosol spray can

Butane gas is sold bottled as a fuel for cooking and camping. When blended with propane and other hydrocarbons, it is referred to commercially as LPG, for liquified petroleum gas. It is also used as a petrol component, as a feedstock for the production of base petrochemicals in steam cracking, as fuel for cigarette lighters and as a propellant in aerosol sprays such as deodorants.

Very pure forms of butane, especially isobutane, can be used as refrigerants and have largely replaced the ozone layer-depleting halomethanes, for instance in household refrigerators and freezers. The system operating pressure for butane is lower than for the halomethanes, such as R-12, so R-12 systems such as in automotive air conditioning systems, when converted to butane will not function optimally. 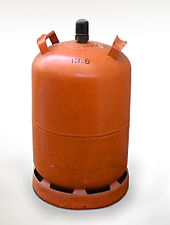 Inhalation of butane can cause euphoria, drowsiness, narcosis, asphyxia, cardiac arrhythmia, temporary memory loss and frostbite, which can result in death from asphyxiation and ventricular fibrillation. Butane is the most commonly misused volatile substance in the UK, and was the cause of 52% of "solvent related" deaths in 2000.[4] By spraying butane directly into the throat, the jet of fluid can cool rapidly to −20 °C by expansion, causing prolonged laryngospasm.[5] "Sudden sniffer's death" syndrome, first described by Bass in 1970,[6] is the most common single cause of "solvent related" death, resulting in 55% of known fatal cases.[5]