Space burial is a procedure in which a small sample of the cremated ashes of the deceased are placed in a capsule the size of a tube of and are launched into space using a . As of 2004, samples of about 150 people have been "buried" in space.Fact|date=May 2008

The effort and cost of launching an object into space is very high. Furthermore, the cost is directly related to the payload, i.e. the mass of the object. Therefore various measures are taken to reduce the mass of the burial, which usually include:

*The corpse is cremated, reducing the mass of the remains to about 5% of the initial mass (a few kilograms).
*Only a small sample of the ashes is included, typically only 1 g or 7 g. The remainder of the ashes can be buried conventionally in the earth or in the sea.

Other measures to reduce cost include:

The capsules are kept together in a flight container, e.g. attached to the upper stage engine of the rocket, to avoid additional "".

The second factor greatly influencing the cost includes the target location of the payload. Most burials do not actually leave the gravitational field of the earth but only achieve an orbit around earth. The capsules containing the samples of the remains circle the earth, until the upper layers of the have slowed down the capsules, and they reenter the atmosphere. The capsules burn up upon reentry similar to a , and the ashes are scattered in the atmosphere. The time between launch and reentry depends on the orbit of the satellite, and can vary widely. The first burial reentered after only 5 years, but other burials are not expected to reenter in less than 250 years. 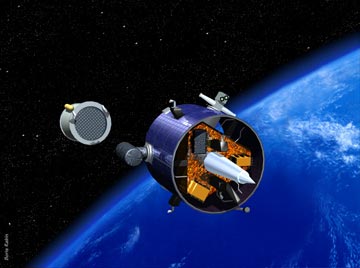 If the moon is still too close, it is possible to launch the remains into , although this is the most costly space burial currently available. In January 2006, the cremated remains of , (, - , ) who was best known for the discovery of , were sent on the , a Robotic NASA Spacecraft similar to Voyager which will go beyond [http://www.spaceflightnow.com/atlas/av010/060119launch.html] .

The practice of space burials is a very recent practice due to the technical difficulties involved in launching an object into space. The very first space burial "Earthview 01: The Founders Flight" was launched on , . An aircraft carried a modified containing samples of the remains of 24 people to an altitude of 11 km (38,000 ft) above the . The rocket then carried the remains on an elliptical orbit with an of 578 km (361 miles) and a of 551 km (344 miles), rotating around earth once every 96 minutes until reentry on , , northeast of . Famous people buried on this flight were and .

The second space burial was the burial of a sample of the remains of Dr. on the moon by the probe, launched on by a three-stage rocket. The probe containing scientific instruments and the ashes of Dr. Shoemaker impacted the moon near the lunar south pole on 4:52 a.m. Central Daylight Time, , .

Currently, only one company, "Space Services Inc.," offers space burials. Space Services took over the assets of Celestis, Inc., which launched four flights from 1997 to 2001. As science progresses it is expected that the cost and difficulties of space burials will be reduced, and other companies may enter the market.

As of 2006, only cremated remains have been buried.

To date, the notion of sending an intact human corpse into outer space for burial is simply too expensive and complex to be feasible.

At least one service for burial in space was planned. As part of the contingency plans for the mission, if the astronauts were unable to return from the lunar landing, a funeral service would be held for them on Earth, similar to the service for , with references to the ocean omitted and replaced with "the deepest of the deep." ("See ")

It should be noted, though, that most religions do not provide special instructions for space burial due to the procedure being only a recent development, and only around 150 people have been buried in space so far. As only a small portion of the remains are buried, a regular funeral and burial ceremony can be performed according to the beliefs of the deceased, and only a small part of the remains are diverted into space. Due to the infrequency of the flights, the sample of the remains have to be stored until the next launch. Also, not all religions allow the bodies of deceased to be cremated, as is often done in space burial.

Buried on the moon on ,

Launched in outer Space on ,

Launched ly and recovered on ,

In , dead characters are sometimes buried in space, by analogy to the naval tradition of .

* Hawk Hawkins, in the movie , died on the moon. Hawkins, after personally making sure an out-of-control nuclear satellite was steered out of Earth's way, managed to land on the Moon and, sitting against a boulder, gazed at the Earth until his air ran out.
* 's 1940 short story "Requiem" describes how the industrialist Delos D. Harriman who funded the first flight to the Moon but was never allowed to fly there himself finally gets there as an old man, dying after landing. He is buried there with 's "Requiem" for the epitaph.
*Captain Spock, from "", was buried in an empty casing and fired onto the rapidly forming Genesis planet, which initiated his rebirth.
*, the hero of the stories with the same name, received a space burial. However, later it was revealed that Captain Future is still alive, and a has been buried instead.
*Ovaron, a character of the "" series, is buried in space in Volume 722: "A Message for Ovaron".
*Breckcrown Hayes, a character of the "" series, is buried in space in Volume 1048: "Atlan's Return".
*Space burials feature in the stories "The Ark"
* in ', is killed during and dragged off to space by an uncontrolled capsule, so he isn't actually buried; he is revived after his drifting body (apparently still partly alive) is found in '. However buries in space several other crewmembers whom the killed during revival from hibernation.
*A space burial for , delivery boy, appears in "" episode "The Sting", but only in 's extended .
*Philip J. Fry, II, the first person on in the "" episode "". He is named after his uncle, listed above. However, his burial was in a conventional graveyard in a space station named Orbiting Meadows National Cemetery.
*Lieutenant John Kelly, a minor character on "". He was the commander of the ill-fated Ares 4 mission to Mars. Lieutenant Kelly disappeared on , , captured by a graviton ellipse and died on board his spacecraft on October 25th. Kelly's body was retrieved by the crew of the USS Voyager and buried in space circa stardate 53301.2 in 2376.
*Numerous other "" characters have also been buried in space.
*Christopher "Maverick" Blair, in the original "Wing Commander", is given a space burial if killed during a mission.
*Kane, from the movie "Alien" is buried in space, being the first human killed by the creature.
*In "", multiple characters are given space burials by having their caskets sent into a star. The ritual always ends with the quote, "From the stars we came, and to the stars we return, from now until the end of time. We therefore commit this body to the deep."
* S.R. Hadden, owner of Hadden Industries, is buried in space after dying of cancer on in the film "Contact". This is different from the book the movie is adapted from, where Hadden is not terminally ill and voluntarily chooses to leave earth in a space-bound "casket" while still alive. The "casket" is actually a small spacecraft capable of leaving Earth orbit for deep space, although the lack of any kind of propulsion means Hadden will undergo to allow him to survive the thousands of years needed to cover interstellar distances.
*The entire crew of "", following the radiation disaster except for David Lister. The first burial shown on the show was George McIntyre.
*The multiple hero Ace Rimmer's remains form a ring of coffins and deactivated hologram transmitters around a planet in the "" universe.
*Dizzy Flores, a character from 's "Starship Troopers", is buried in space with full military honors after dying from a bug attack.
*A military space funeral parlor is depicted in "" in which human remains from Human-Drac wars are routinely and irreverently disposed of.
*In "", the Spartans that did not survive the genetic enhancement procedures are launched into space.
*Captain , the original White Base captain in "" (his burial is shown in the TV series but not the movie compilations.)
*A very realistic space burial scene is depicted in the 1955 film "" after a crewmember is killed by a meteor fragment.
*, a character from "", is buried in space in a coffin.
*, father of The Bicykid (Marvus Plein) is buried on the moon in the "" comic series.
*Burial in space is also part of the plot of the movie version of "".
*In the end of Isaac Asimov's novel it is briefly mentioned that the main protagonist, , was buried in space.
*In the animated sitcom , Stewie buries his stuffed bear, Rupert, in space. (In a parody of Spock's burial in "")
*In the epilogue of the film , 's beloved Maya along with Tokargan ally Zoll and Mira (the last Togargan female) are buried in space. Harlock's eulogy translated (from Japanese) as "Sea of stars, we leave our loved ones in your hands in the hope that truth is governing this sea."

The shows that four s and 15 s have perished in flight .

* crash-landed following a failure aboard his on , .
* was killed , when his -3 began to spin on re-entry and descent and disintegrated near . Maj. Adams was posthumously awarded for his last flight in the X-15-3, which had attained an altitude of 266,000 feet (81.1 km) [ [http://www.check-six.com/Crash_Sites/X-15A_crash_site.htm Check-Six.com - The Crash of X-15A-3] ] .
* The three crew members of , , and , were discovered dead after a successful landing following a nearly 24-day mission in earth orbit aboard the . The 's death were attributed to , caused by a rapid decompression mishap during re-entry on ,.
* The seven bodies of , , , , , Michael J. Smith, and were recovered in the mostly intact cockpit after the destruction of the Space Shuttle "Challenger" of , .
* The seven-member crew of , , , , , , and were killed in the re-entry disintegration of the Space Shuttle "Columbia" on , .

Thus no remains of these victims are or have been in space.

A number of animals have died in space; see . Not clear is whether there are still animal remains in space. Though there have been requests, no pets have yet been buried in space.