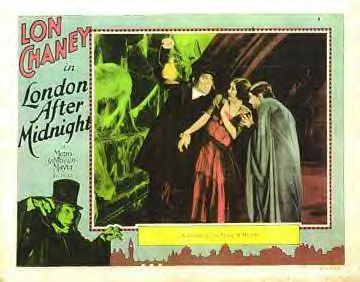 "London After Midnight" is a 1927 silent with horror overtones. The film stars Lon Chaney, , , , and and was directed by . It is also a , quite possibly the most famous lost film ever. The last known copy was destroyed in a fire in an film vault in 1965.

The setting of the film is (then contemporary) 1920s .

Sir Roger Balfour is found shot to death in his home. Inspector Burke () of Scotland Yard is called in to investigate. The suspects are Williams (the butler), Sir James Hamlin () and his nephew, Arthur Hibbs (). A suicide note is found and the case is supposedly closed.

Five years later, the old residence of Balfour is taken up by a man in a beaver-skin hat, with large fangs and gruesome, sunken eyes. His assistant is a ghostly woman, with flowing robes and raven black hair. Could it be Balfour, returned from the dead?

Chaney's makeup for the film is noteworthy, for the sharpened teeth and the hypnotic eye effect he achieved with special wire fittings which he wore like s. Based on surviving accounts, he purposefully gave the "vampire" character an absurd quality, because it was the film's Scotland Yard detective character (also played by Chaney) in a disguise. Surviving stills show this was the only time Chaney used his famous makeup case as an on-screen prop.

The film was well-received at the box-office, grossing almost $500,000. It was the most successful collaborative film between Chaney and Browning. Unfortunately, it is now lost: no copies of the film are known to exist, although there has been an attempt at a reconstruction utilizing the script and publicity shots. Browning later remade the film, with some changes to the plot, as "" ( plays the police inspector and portrays the vampire).

The film was used as a part of the defense for a man accused of murdering a woman in Hyde Park, London in 1928. He claimed Chaney's performance drove him temporarily insane, but his plea was rejected and he was convicted of the crime.

The last known print of the film was stored by MGM in Vault #7. In 1965, an electrical fire broke out in the vault that destroyed countless films from the silent era, including this last known print. However, rumors persist that one copy of the film may exist in a private collection in and that the owner has declined to bring the print forward for preservation.Fact|date=June 2007 On July 24th 2008, linked to a story of an eye witness who claims to have seen a nitrate print of the film in the late 1980s in a Hollywood archive, but the veracity of that story remains unconfirmed.

In 2002, commissioned famed restoration producer ("Greed", "") to produce a 45 min. reconstruction of the film, using still photographs. This was well received by horror fans and Schmidlin received the Rondo Award for his efforts.