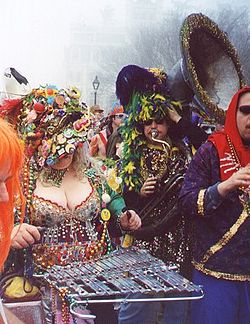 A musician playing a glockenspiel.

A glockenspiel (German pronunciation: [ˈɡlɔkənˌʃpiːl], glocken:bells and spiel:play) is a percussion instrument composed of a set of tuned keys arranged in the fashion of the keyboard of a piano. In this way, it is similar to the xylophone; however, the xylophone's bars are made of wood, while the glockenspiel's are metal plates or tubes, and making it a metallophone. The glockenspiel, moreover, is usually smaller and higher in pitch.[1]

In German, a carillon is also called a Glockenspiel.

When used in a marching or military band, the bars are sometimes mounted in a portable case and held vertically, sometimes in a lyre-shaped frame. However, sometimes the bars are held horizontally using a harness similar to a marching snare harness. In orchestral use, the bars are mounted horizontally. A pair of hard, unwrapped mallets, generally with heads made of plastic or metal, are used to strike the bars, although mallet heads can also be made of rubber (though using too soft of rubber can make a dull sound). If laid out horizontally, a keyboard may be attached to the instrument to allow chords to be more easily played. Another method to playing chords is to play with four mallets.

The glockenspiel is limited to the upper register, and usually covers about two and a half to three octaves, but can also reach up to 3.5 octaves. The glockenspiel is a transposing instrument; its parts are written two octaves below the sounding notes. When struck, the bars give a very pure, bell-like sound.

Glockenspiels are still quite popular and appear in almost all genres of music ranging from hip-hop to jazz. Percussionist Neil Peart of the rock band Rush uses the glockenspiel in several of the band's arrangements, most notably in the commercial hit songs "The Spirit of Radio" and "Closer to the Heart", and also in album tracks "Xanadu" and "Circumstances". The glockenspiel was also featured in Jimi Hendrix's classic ballad "Little Wing", Avenged Sevenfold's song "Nightmare" during the intro, as well as in indie folk music by artists such as Paul Duncan of Warm Ghost.[2] George Martin, The Beatles' producer, plays glockenspiel on the band's song Being for the Benefit of Mr. Kite! to help create the atmosphere of the Pablo Fanque circus performance that inspired the song. [3]

A well-known classical piece that uses the glockenspiel is Mozart's Die Zauberflöte. (This part, like many others, calls for a keyboard glockenspiel. The part is sometimes performed on a celesta, however, which sounds quite different from the intended effect.) A modern example of the glockenspiel is Steve Reich's 1970–71 composition Drumming, in which the glockenspiel becomes a major instrument in the 3rd and 4th movements.[4]

Other instruments that work on the same struck-bar principle as the glockenspiel include the marimba and the vibraphone. There are also many glockenspiel-like instruments in Indonesian gamelan ensembles.