Manzanares el Real is a 7,250 inhabitant town in the northern area of the autonomous Community of Madrid. It is located at the foot of The Pedriza, a part of the Sierra de Guadarrama, and next to the embalse de Santillana (the Santillana reservoir). 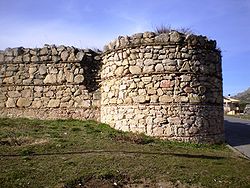