Melide, A Coruña
For the municipality in Switzerland, see Melide, Switzerland. 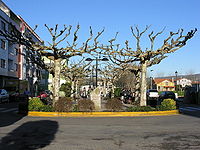 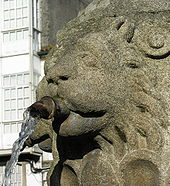 The history of this village, since its foundation in the 10th century, is deeply linked with the pilgrimage to Santiago de Compostela as it is on the path of the Camino de Santiago.

In 1320 Melide obtained from the Archbishop of Santiago, Berenguel de Landoira, the privilege of building up a castle, fortressing the village, and charging taxes. In 1467 "os irmandiños" opposed the Archbishop Alonso II Fonseca and started a series of fights against its power. During this riot the walls of the village were destroyed as well as the castle. After this, the Catholic Monarchs banned the construction of any fortress in the village.

During the last few centuries, like many villages in inner Galicia, it has suffered from a vast emigration of its people to Cuba and Argentina up to 1950s, and then to Switzerland, the United Kingdom, and to other cities of Spain such as Barcelona, Bilbao and A Coruña.

Currently its economy is based on agriculture, meat processing, and, more recently, tourism.