County Londonderry or County Derry is one of the six counties of Northern Ireland. Adjoined to the north-west shore of Lough Neagh, the county covers an area of 2,074 km², with a population of approximately 233,550. It is also one of the thirty-two traditional counties of Ireland, lying within the historical province of Ulster.

Since 1981 it has become one of four counties in Northern Ireland that has a Catholic majority (55.56% according to the 2001 Census[4]), with 57% of the Catholic population residing within Derry City Council.[4]

The highest point in the county is the summit of Sawel Mountain (678m) on the border with County Tyrone. Sawel is part of the Sperrin Mountains, which dominate the southern part of the county. To the east and west, the land falls into the valleys of the Bann and Foyle rivers respectively; in the south-east, the county touches the shore of Lough Neagh, which is the largest lake in Ireland; the north of the county is distinguished by the steep cliffs, dune systems and remarkable beaches of the Atlantic coast.

The county is home to a number of important buildings and landscapes, including the well-preserved 17th-century city walls of Derry; the National Trust-owned Plantation estate at Springhill; the Mussenden Temple with its spectacular views of the Atlantic; the dikes, artificial coastlines and the noted bird sanctuaries on the eastern shore of Lough Foyle; and the visitor centre at Bellaghy Bawn, close to the childhood home of Nobel laureate Seamus Heaney. In the centre of the county are the old-growth deciduous forests at Banagher and Ness Wood, where the Burntollet River flows over the highest waterfalls in Northern Ireland.

The county flower is the Purple Saxifrage.[5] The term Oak Leaf County is the county nickname particularly in relation to the county's teams in Gaelic Athletic Association competitions.

The place name Derry is an anglicisation of the old Irish Daire[12] (Modern Irish Doire[13]) meaning oak-grove or oak-wood.[14] As with the city, its name is subject to the Derry/Londonderry name dispute, with the form Derry preferred by nationalists and Londonderry preferred by unionists.[15][16][17][18][19][20][21][22][23][24] The name Derry is used in the Republic of Ireland, while most of the British authorities use the name Londonderry. 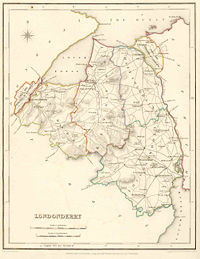 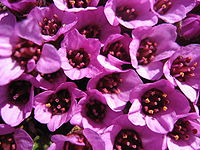 The county flower is the Purple Saxifrage

According to the Encyclopedia of Earth, Mount Sandel in County Londonderry is "perhaps the oldest recorded settlement within Ireland".[25] Unlike the town, governmentally there was not a preceding administrative area called County Derry. Rather County Londonderry was created by James I when he gave a charter to the Irish Society to undertake the new county's plantation – the London prefix being added in reference to the London Livery Companies of the Irish Society. This charter is dated 29 March 1613,[26] and declared that the "City of Londonderry" and everything contained within:

This new county would comprise the then County Coleraine, which consisted of the baronies of Tirkeeran, Coleraine, and Keenaght; all but the south-west corner of the barony of Loughinsholin, which was then a part of County Tyrone; the North East Liberties of Coleraine, which was part of County Antrim; and the City and Liberties of Londonderry, which were in County Donegal.[26][27] The liberties of Coleraine and Londonderry were requested by the Irish society so that they could control both banks of the mouths of the River Foyle and the River Bann and have access to sufficient wood for construction.[28]

As a result of the Local Government (Ireland) Act 1898, the city was detached from the county for administrative purposes, becoming a separate county borough from 1899. The county town of County Londonderry, and seat of the Londonderry County Council until its abolition in 1973, was therefore moved to the town of Coleraine.

In 1973 counties ceased to be a unit of administration within Northern Ireland, being replaced by district councils.

Cities (population of 75,000 or more with a cathedral)

Government-funded education up to secondary school level is administered by

For Catholic grant-maintained schools administration is by the Derry Diocesan Education Office.

Two major centres of the University of Ulster are in the county, including its headquarters at Coleraine and the Magee Campus in Derry.

The oak leaf which represents the county's nickname.

In Gaelic games, the Derry teams wear the colours red and white. There are many club teams competing in up to five leagues and three championships. The county team has won one All-Ireland Senior Football Championship (in 1993) and five National League titles. Hurling is also widely played but is not as popular as football.[citation needed] However, the county team is generally regarded as one of the top hurling sides in Ulster[citation needed] and in 2006 won the Nicky Rackard Cup - the third tier hurling competition in Ireland.

In association football, County Londonderry is represented in the IFA Premiership by Coleraine F.C. and Institute F.C. Coleraine are one of the most successful provincial sides in the country.[citation needed] Limavady United F.C., Moyola Park F.C., Portstewart F.C. and Tobermore United F.C. compete in the IFA Championship. Derry City F.C. play in the Premier Division of the League of Ireland after leaving the Northern Ireland structures in 1985, having resigned from the Irish Football League at the height of the Troubles because of not being allowed play their home games at the Brandywell due to security concerns from other clubs.

The Northern Ireland Milk Cup was established in 1983 and is regarded as one of the most prestigious youth football tournaments in Europe and the world.[30][31][32][33] The competition is based at Coleraine and involves several other towns and villages in the county - Limavady, Portstewart and Castlerock - and in neighbouring County Antrim - Ballymoney, Portrush, Ballymena and Broughshane. The event, held in the last week of July, has attracted teams from 56 countries around the world including Europe, the USA, Africa, the Far East, South America, the Middle East, Australia, Russia, New Zealand and Canada. Some of the biggest teams in the world have entered including Premiership giants Everton, Liverpool, Manchester United, Chelsea, Tottenham Hotspur as well as top European teams such as Feyenoord, FC Porto, FC Barcelona, Benfica, Bayern Munich and Dynamo Kiev.

In rugby union, the county is represented at senior level by Rainey Old Boys Rugby Club, Magherafelt who compete in the Ulster Senior League and All Ireland Division Three. Limavady R.F.C, City of Derry Rugby Club, Londonderry Y.M.C.A and Coleraine Rugby Club all compete in Ulster Qualifying League One.

Cricket is particularly popular in the north-west of Ireland, with 11 of the 20 senior clubs in the North West Cricket Union located in County Londonderry: Limavady, Eglinton, Glendermott, Brigade, Killymallaght, Ardmore, Coleraine, Bonds Glen, Drummond, Creevedonnell and The Nedd.