The Balearic Islands (Catalan: Illes Balears, IPA: [ˈiʎəz βəɫəˈas]; Spanish: Islas Baleares)[1] are an archipelago of Spain in the western Mediterranean Sea, near the eastern coast of the Iberian Peninsula.

The four largest islands are: Majorca, Minorca, Ibiza and Formentera. The archipelago forms an autonomous community and a province of Spain with Palma as the capital city. The co-official languages in the Balearic Islands are Catalan and Spanish. The current Statute of Autonomy declares the Balearic Islands as one nationality of Spain.

The main islands of the autonomous are Majorca (Mallorca), Minorca (Menorca), Ibiza (Eivissa) and Formentera, all of which are popular tourist destinations. Among the minor islands is Cabrera, which is the location of the Parc Nacional de l'Arxipèlag de Cabrera. The islands can be further grouped, with Majorca, Menorca, and Cabrera as the Gymnesian Islands (Illes Gimnèsies), and Ibiza and Formentera as the Pine Islands (Illes Pitiüses).

The official name of the Balearic Islands is in Catalan; Illes Balears. While in Spanish they are known as the Islas Baleares. The term "Balearic" derives from Greek (Γυμνησίαι/Gymnesiae and Βαλλιαρεῖς/Balliareis)[3] and Latin (Baleares).

There are various theories on the origins of the two ancient Greek and Latin names for the islands—Gymnasiae and Baleares. Two survive in classical sources.

According to the Lycophron's Alexandra verses, the islands were called Gymnesiae Γυμνησίαι (gymnos γυμνός, meaning naked in Greek) because its inhabitants were often nude, probably because of the year-long benevolent climate.

The Greek and Roman writers generally derive the name of the people from their skill as slingers (baleareis βαλεαρεῖς, from ballo βάλλω: ancient Greek meaning for 'to launch'), although Strabo considered the name to be of Phoenician origin. He observed that it was the Phoenician equivalent for the Greek word for lightly armoured soldiers, known as gymnetas γυμνῆτας.[4]

The root bal does point to a Phoenician origin; perhaps the islands were sacred to the god Baal; and the accidental resemblance to the Greek root ΒΑΛ (in βάλλω ballo), coupled with the occupation of the people, would be quite a sufficient foundation for the usual Greek practice of assimilating the name to their own language. That it was not, however, Greek at first, may be inferred with great probability from the fact that the common Greek name of the islands is not Βαλεαρεῖς (Baleareis), but Γυμνησίαι (Gymnesiai), the former being the name used by the natives, as well as by the Carthaginians and Romans.[5] The latter name, of which two fancied etymologies have been already referred to, is probably derived from the light equipment of the Balearic troops (gymnetae γυμνῆται).[4]

There is little history on the earliest inhabitants of the islands, though many legends exist. The story, preserved by Lycophron, that certain shipwrecked Boeotians were cast nude on the islands, was evidently invented to account for the name Gymnesiae. There is also a tradition that the islands were colonized by Rhodes after the Trojan war.[4]

The islands had a very mixed population, of whose name of the islands (an instance of folk etymology) — until the Phoenicians clothed them with broad-bordered tunics. In other stories they were naked only in the heat of summer.

Other legends hold that the inhabitants lived in hollow rocks and artificial caves, that they were remarkable for their love of women and would give three or four men as the ransom for one woman, that they had no gold or silver coin, and forbade the importation of the precious metals, so that those of them who served as mercenaries took their pay in wine and women instead of money. Their marriage and funeral customs, peculiar to Roman observers, are related by Diodorus Siculus (v. 18). 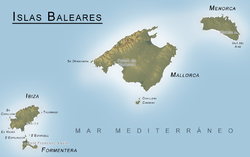 Map of the Balearic Islands

In ancient times, the islanders of the Gymnesian Islands constructed talayots, and were famous for their skill with the sling. As slingers they served, as mercenaries, first under the Carthaginians, and afterwards under the Romans. They went into battle ungirt, with only a small buckler, and a javelin burnt at the end, and in some cases tipped with a small iron point; but their effective weapons were their slings, of which each man carried three, wound round his head (Strabo p. 168; Eustath.), or, as seen in other sources, one round the head, one round the body, and one in the hand. (Diodorus) The three slings were of different lengths, for stones of different sizes; the largest they hurled with as much force as if it were flung from a catapult; and they seldom missed their mark. To this exercise they were trained from infancy, in order to earn their livelihood as mercenary soldiers. It is said that the mothers allowed their children to eat bread only when they had struck it off a post with the sling.[6]

The Phoenicians took possession of the islands in very early times;[7] a remarkable trace of their colonization is preserved in the town of Mago (Mahon in Minorca). After the fall of Carthage, the islands seem to have been virtually independent. Notwithstanding their celebrity in war, the people were generally very quiet and inoffensive.[8] The Romans, however, easily found a pretext for charging them with complicity with the Mediterranean pirates, and they were conquered by Q. Caecilius Metellus, thence surnamed Balearicus, in 123 BC.[9] Metellus settled 3,000 Roman and Spanish colonists on the larger island, and founded the cities of Palma and Pollentia.[10] The islands belonged, under the Roman Empire, to the conventus of Carthago Nova (modern Cartagena), in the province of Hispania Tarraconensis, of which province they formed, the fourth district, under the government of a praefectus pro legato. An inscription of the time of Nero mentions the PRAEF. PRAE LEGATO INSULAR. BALIARUM. (Orelli, No. 732, who, with Muratori, reads pro for prae.) They were afterwards made a separate province, called Hispania Balearica, probably in the division of the empire under Constantine.[11]

The two largest islands (the Balearic Islands, in their historical sense) had numerous excellent harbours, though rocky at their mouth, and requiring care in entering them (Strabo, Eustath.; Port Mahon is one of the finest harbours in the world). Both were extremely fertile in all produce, except wine and olive oil.[12] They were celebrated for their cattle, especially for the mules of the lesser island; they had an immense number of rabbits, and were free from all venomous reptiles.[13] Among the snails valued by the Romans as a diet, was a species from the Balearic isles, called cavaticae, from their being bred in caves.[14] Their chief mineral product was the red earth, called sinope, which was used by painters.[15] Their resin and pitch are mentioned by Dioscorides[16] The population of the two islands is stated by Diodorus at 30,000.

The part of the Mediterranean east of Spain, around the Balearic Isles, was called "Mare Balearicum",[17] or "Sinus Balearicus".[18]

In the chaos surrounding the fall of the Roman Empire, the islands were conquered by the Vandals. They were subsequently conquered by the Byzantine Empire, but soon fell to the Moors after the their conquest of Iberia. The emirate of Cordoba captured them in 903. After its dissolution, they depended from the taifa of Dénia (1013–1067), later becoming an independent taifa.

Between 1113 and 1115, a fleet led by Ugo da Parlascio Ebriaco and Archbishop Pietro Moriconi of the Republic of Pisa made a successful expedition against the Balearic Islands. The expedition was launched with the support of Constantine I of Logudoro and his base of Porto Torres. However, the following year the islands were reconquered by Islamic forces of the Almoravid dynasty.

In the 13th century (1239), King James I of Aragon conquered the islands, annexing them to the Crown of Aragon. After his death, he left the Balearic islands (and other counties as Roussillon or Montpellier) as a new kingdom, the Kingdom of Mallorca, to his son James II. However, according to this king's will, even though his son would gain the title of King, he and his descendants were always to be vassals of the king of Aragon. In this case, it would mean that James was a vassal of his oldest brother, Peter III of Aragon. However, after a turbulent and difficult period of existence, the Kingdom of Mallorca was definitely reincorporated into the Crown of Aragon with the Battle of Llucmajor (1349).

In 1476, Ferdinand II of Aragon (king of Aragon) and Isabella I of Castile (queen of Castile) were married. After their deaths, their respective territories (until then governed separately) were governed jointly, in the person of their grandson, the Emperor Charles V. This can be considered the foundation of the modern Spanish state, albeit a decentralized one wherein the various component territories within the united crowns retained their particular historic laws and privileges.

The Balearic Islands were frequently attacked by Barbary pirates from North Africa; Formentera was even temporarily abandoned by its population. In 1514, 1515 and 1521 the coasts of the Balearic Islands and the Spanish mainland were raided by Turkish privateers under the command of the Ottoman admiral, Hayreddin Barbarossa.

The island of Minorca was a British dependency for most of the 18th century as a result of the 1713 Treaty of Utrecht. This treaty--signed by the Kingdom of Great Britain and the Kingdom of Portugal as well as the Kingdom of Spain, to end the conflict caused by the War of the Spanish Succession--gave Gibraltar and Minorca to the Kingdom of Great Britain, Sardinia to Austria (both territories had been part of the Crown of Aragon for more than four centuries), and Sicily to the House of Savoy. In addition, Flanders and other European territories of the Spanish Crown were given to Austria. The island fell to French forces, under Armand de Vignerot du Plessis in June 1756 and was occupied by them for the duration of the Seven Years War. The British re-occupied the island after the war but, with their military forces diverted away by the American War of Independence, it fell to a Franco-Spanish force after a seven-month siege (1781/2). Spain retained it under the Treaty of Paris in 1783. However during the French Revolutionary Wars, when Spain became an ally of France, it came under French rule.

Minorca was finally returned to Spain by the Treaty of Amiens during the French Revolutionary Wars, following the last British occupation, which lasted from 1798 to 1802. The continued presence of British naval forces, however, meant that the Balaerics were never occupied by the French during the Napoleonic Wars. 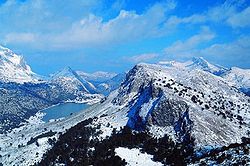 Port de Sóller on the northwest coast of Majorca