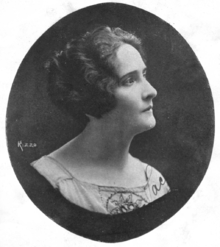 She was born on the Monte Alverne farm in Manhuaçu in Minas Gerais state, Brazil on 16 May 1887. "She was the daughter of Modesto de Araújo Lacerda and Amélia de Araújo Lacerda, freethinkers and educated folk from whom she certainly inherited her strong anticlerical outlook".[2].

"Five years after she was born they moved to Barbacena, the town where she started her schooling and by the age of 16 she was training as a primary teacher, the profession to which she was deeply committed[3]". One year later she married Carlos Ferreira de Moura[4].

As a teacher and a pedagogue in Barbacena she founded the League Against Illiteracy and worked with other women to help provide housing for the homeless. Her ideas regarding education were largely influenced by Francisco Ferrer. Moura used Albert Einstein and Mahatma Gandhi as examples of pacifism in her essay "Serviço militar obrigatório para mulher? Recuso-me! Denuncío!"

She later moved to São Paulo and became involved in journalism for the anarchist and labor press. "Among the labour papers she wrote for were O Culinário Paulista, A Patrulha Operária, A Plebe, A Lanterna and O Trabalhador Gráfico."[5] "At that time of great social upheaval she started to give lectures (some in the city of Santos) to trade unions, cultural centres, anarchist theatre groups and labour associations and the likes of the Printing Workers’ Union, the Anticlerical League and the Union of Footwear Crafts. She also started to write for the anarchist press, among it the newspaper A Plebe where she wrote about ‘the underlying and ancillary sciences of education and educational psychology’ carrying on and adding to the work done in that field by Neno Vasco with the weekly newspaper A Terra Livre in 1906."[6]

There she also lectured on topics including education, women's rights, free love, and antimilitarism. Her writings and essays landed her attention not only in Brazil, but also in Argentina and Uruguay. "In 1918 she began her career as a writer, issuing her first book On Education. Such was the impact it made that the following year she published two follow-ups Why Does the Future Triumph?."[7] In February 1923 she launched Renascença, a periodical linked with the anarchist, progressive, and freethinking circles of the period.