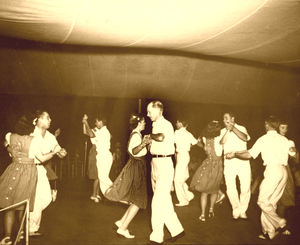 Square dance is a folk dance with four couples (eight dancers) arranged in a square, with one couple on each side, beginning with Couple 1 facing away from the music and going counter-clockwise until getting to Couple 4. Couples 1 and 3 are known as the head couples, while Couples 2 and 4 are the side couples. Each dance begins and ends each sequence with "sets-in-order" in the square formation. The dance was first described in 17th century England but was also quite common in France and throughout Europe and bears a marked similarity to Scottish Country Dancing. It has become associated with the United States of America due to its historic development in that country. Nineteen US states have designated it as their official state dance.

The various square dance movements are based on the steps and figures used in traditional folk dances and social dances of the various people who migrated to the USA. Some of these traditional dances include Morris dance, English Country Dance, Caledonians and the quadrille. Square dancing is enjoyed by people around the world, and people around the world are involved in the continuing development of this form of dance. Square dancers are prompted or cued through a sequence of steps (square dance choreography) by a square dance caller to the beat of music—almost a "Simon Says" in dance form. The caller leads, but usually does not participate in the dance. Whether a square dancer travels to China, France, or Mexico, he or she can enjoy attending a square dance because it will only be called in English. This is the only form of dance that is not translated into other languages.

The roots of the American folk music revival in New York City in the 1950s were in square dancing and folk dancing in the 1940s and musicians like Pete Seeger being involved providing the music and songs.[1][2][3]

There are two broad categories of square dance:

In this context a "call" refers to the name of a specific dance movement. It may alternatively refer to the phrase used by a caller to cue the dancers so they dance the specified movement, or to the dance movement itself. It mirrors the ambiguity of the word "dance", which may mean a dance event, the dancing of an individual to the playing of one piece of music, or dancing in general.

A square dance call may take a very short time or a very long time to execute. Most calls require between 4 and 32 "counts" (where a count is roughly one step). In traditional square dancing the timing of a call is dictated by tradition; in some regional styles, particularly that of New England, the dance movements are closely fitted to the phrases of the music. In modern Western square dancing many calls have been given formally specified durations, based partly on direct observation of how long it takes an average dancer to execute them.

Traditional and modern Western square dancing have a number of calls in common, but there are usually small differences in the way they are performed. For example, the "Allemande Left" is traditionally performed by grasping left hands with the other dancer, pulling away from each other slightly, and walking halfway around a central axis then stepping through. In modern Western dance the grip is modified so that each dancer grips the forearm of the other, and there is no pulling (that is, each dancer supports his or her own weight). These modifications make it easier to enter and exit the movement, and thus easier to incorporate into a long sequence of calls.

Traditional square dance uses a comparatively small number of calls—between about ten and thirty, depending on the region and the individual caller. (Many traditional square dance calls are similar or identical to contra dance calls, which are described at Contra dance choreography). Every dance is explained before the participants dance it, unless everyone present is familiar with it. Participants are made to feel welcome to make mistakes (within limits), and the mistakes can sometimes make the dance a lot more fun.

In modern Western square dance the participants are expected to have learned and become proficient in a particular program, a defined set of calls. Dancing modern Western square dance is constantly challenging and surprising due to the unknown or unexpected choreography of the caller (that is, the way the caller ties together the "calls" and the formations which result)—unlike traditional square dance, very rarely are two modern Western dances ever alike. Like traditional square dancing, recovering from occasional mistakes is often part of the fun, but dancers are usually encouraged to dance only those programs at which they are reasonably proficient. 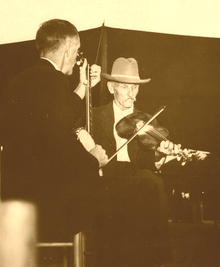 The two types of square dance are accompanied by different types of music.

Modern Western square dancing is danced to a variety of music types, everything from pop to traditional country to Broadway musical to contemporary country music—even rock and techno. The music is usually played from recordings; the beat is also somewhat faster, as the "perfect" modern Western square dance tempo is 120–128 bpm. At this speed dancers take one step per beat of the music.

Square dance calling is both an art and a science. The caller's task is to create dance sequences that have the qualities of good body flow, good timing, surprise dancers and are resolved with dancers in sequence and have the correct partner pairings. Some of the top modern western callers in the world are Jerry Story (USA), Dennis Kolecki (WHS), Paul Bristow (UK), Stefan Forster (Germany), Christer Bern (Sweden) and David Cox (Australia).