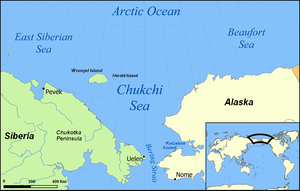 Map of the Chukchi Sea.

Scientists on the sea ice in the Chukchi Sea.

Chukchi Sea (Russian: Чуко́тское мо́ре) is a marginal sea of the Arctic Ocean. It is bounded on the west by the De Long Strait, off Wrangel Island, and in the east by Point Barrow, Alaska, beyond which lies the Beaufort Sea. The Bering Strait forms its southernmost limit and connects it to the Bering Sea and the Pacific Ocean. The principal port on the Chukchi Sea is Uelen in Russia. The International Date Line crosses the Chukchi Sea from NW to SE. It is displaced eastwards to avoid Wrangel Island as well as the Chukotka Autonomous Okrug on the Russian mainland. 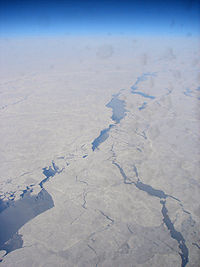 Spring breakup of sea ice on the Chukchi Sea.

The Chukchi Sea has very few islands compared to other seas of the Arctic. Wrangel Island lies at the northwestern limit of the sea, Herald Island is located near its northern limit, and a few small islands lie along the Siberian and Alaskan coasts.

The sea is named after the Chukchi people, who reside on its shores and on the Chukotka Peninsula. The coastal Chukchi traditionally engaged in fishing, whaling and the hunting of walrus in this cold sea.

In Alaska, the rivers flowing into the Chukchi Sea are the Kivalina, the Kobuk, the Kokolik, the Kukpowruk, the Kukpuk, the Noatak, the Utukok, the Pitmegea, and the Wulik, among others. Of rivers flowing in from its Siberian side, the Amguyema, Ioniveyem, and the Chegitun are the most important.

For the list of Alaska and Siberia rivers that flow into this sea, see Category:Watersheds of the Chukchi Sea.

The International Hydrographic Organization defines the limits of the "Chuckchi Sea" [sic] as follows:[1]

On the West. The Eastern limit of East Siberian Sea [From the Northernmost point of Wrangel Island through this island to Cape Blossom thence to Cape Yakan on the main land (176°40'E)].

On the South. The Arctic Circle [66°33'39"N] between Siberia and Alaska. [The northern limit of the Bering Sea.]

Common usage is that the southern extent is further south at the narrowest part of the Bering Strait[citation needed] which is on the 66th parallel north.

In 1648 Semyon Dezhnyov sailed from the Kolyma River on the Arctic to the Anadyr River on the Pacific, but his route was not practical and was not used for the next 200 years. In 1728 Vitus Bering and in 1779 Captain James Cook entered the sea from the Pacific.

On 28 September 1878, during Adolf Erik Nordenskiöld's expedition that made the whole length of the Northeast passage for the first time in history, the steamship Vega got stuck in fast ice in the Chukchi Sea. Since further progress for that year was impossible, the ship was secured in winter quarters. Even so, members of the expedition and the crew were aware only a few miles of ice-blocked sea lay between them and the open waters. The following year, two days after Vega was released, she passed the Bering Strait and steamed towards the Pacific Ocean.

In 1913, Karluk, abandoned by expedition leader Vilhjalmur Stefansson, drifted in the ice along the northern expanses of the Chukchi Sea and sank, crushed by ice near Herald Island. The survivors made it to Wrangel Island, where they found themselves in a hopeless situation. Then Captain Robert Bartlett walked hundreds of kilometers with Kataktovik, an Inuit man, on the ice of the Chukchi Sea in order to look for help. They reached Cape Vankarem on the Chukotka coast, on April 15, 1914. Twelve survivors of the ill-fated expedition were found on Wrangel island nine months later by the King & Winge, a newly-built Arctic fishing schooner.

In 1933, the steamer Chelyuskin sailed from Murmansk, east bound to attempt a transit of the Northern Sea Route to the Pacific, in order to demonstrate such a transit could be achieved in one season. The vessel became beset in heavy ice in the Chukchi Sea, and after drifting with the ice for over two months, was crushed and sank on 13 February 1934 near Kolyuchin Island. Apart from one fatality, her entire complement of 104 was able to establish a camp on the sea ice. The Soviet government organised an impressive aerial evacuation, under which all were rescued. Captain Vladimir Voronin and expedition leader Otto Schmidt became heroes.

Following several unsuccessful attempts, the wreck was located on the bed of the Chukchi Sea by a Russian expedition, Chelyuskin-70, in mid-September 2006. Two small components of the ship's superstructure were recovered by divers and were sent to the ship's builders, Burmeister & Wain of Copenhagen, for identification.

In July 2009, a large mass of organic material was found floating in the sea off the northwest Alaskan coast. Analysis by the U.S. Coast Guard has identified it as a large body of algal bloom.

On October 15, 2010, the Russian scientists have opened a floating polar research station in the Chuckchi Sea at the margin of the Arctic Ocean. The name of the station is Severny Polyus-38 and will be home to 15 researchers for a year. They will conduct polar studies and gather scientific evidence ‘to reinforce Russia’s claims to the Arctic.[2]

The polar bear is found on pack ice of the Chukchi Sea; in fact, the population of polar bears that is found in the sea and its pack ice is one of the five genetically distinct Eurasian populations of this species.[3]

The Chukchi shelf is believed to hold oil and gas reserves as high as 30 billion barrels (4.8×109 m3). Several oil companies have competed for leases on the area, and on 6 February 2008, the U.S. government announced the successful bidders would pay US$2.6 billion for extraction rights. The auction has drawn some criticism from environmentalists.[4]