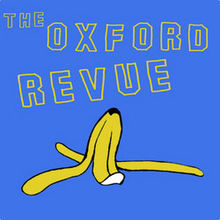 The Oxford Revue is a comedy group featuring students from Oxford University, England. Founded in the early 1950s, The Oxford Revue has produced many prominent comedians and satirists. The Revue writes, produces and performs several shows each term. Shows are traditionally held in local pubs, colleges and playhouses.

The founding of the Revue in around 1952/3 is shrouded in mystery. The most accurate account of it to date is probably that of Michael Palin, former Revue Director, who describes how his brother-in-law and 'another mad gentleman' started the Oxford Theatre Group, as a source of funding for Edinburgh shows, in the early 1950s. From this, he "helped found an offshoot group, the Oxford Revue Group, to take a revue up to the Edinburgh Fringe".[1]

During the academic year 2009-10, the Oxford Revue performed regular 'Write Off's at the Wheatsheaf pub, airing new sketches in front of an intimate audience. In February 2010, the Revue ran for a week at the Burton-Taylor Studio, Oxford, in their Brighton-themed show "The Oxford Revue Goes To Blighty". The show was rated 5 stars by The Oxford Theatre Review.[3] The following term, the Oxford Revue invited the Durham Revue and the Cambridge Footlights for the trio's annual show, "The Oxford Revue and Friends" at the Oxford Playhouse. The show sold out all 600 seats and was well received.[4] Aside from the shows at the Wheatsheaf, Burton-Taylor Studio and Oxford Playhouse, the Revue regularly performed at various college charity nights and balls, including the ball at the Oxford Union. They also travelled to Cambridge and Durham to perform in large-scale shows and debates at the Cambridge Union.

In August 2010, the Revue took their show, "The Oxford Revue is Going Places", to the Edinburgh Fringe Festival, under the presidency of Ollie Mann and the direction of Rory O'Keeffe. The poster was designed by photographer Adam Levy.[5] They performed at the Underbelly venue and sold well, receiving 4 stars from Broadway Baby.[6]

During Michaelmas Term 2010, the Revue overhauled their website and have begun posting articles, videos and written comedy pieces.[7] They performed two shows at the Wheatsheaf pub as well as the Trinity College charity night and the UNICEF Comedy night.

The current members of the Oxford Revue are: