This species inhabited islands of the Seychelles group, where it thrived on vegetation on the edges of marshes and streams. By 1840, it had disappeared from the wild and was assumed to be extinct. As a grazing species, it somewhat resembled the Aldabra tortoise with its domed shape.

In 1999, some Seychelles island tortoises (12 known individuals) were suggested to have survived in captivity. The report of oddly-shaped captive tortoises prompted the Nature Protection Trust of Seychelles to examine the identity of the living tortoises. Examination of museum specimens of the "extinct" Seychelles species by Dr. Justin Gerlach and Laura Canning seemed to show some living tortoises possess characteristics of the extinct species.

However, recently published scientific papers on the genetics of the Seychelles and Indian Ocean tortoises provide conflicting results. Some studies suggest only one species was present historically, but others support the presence of three closely related species.

A 181-year old tortoise on Saint Helena, named Jonathan, is believed to be a survivor of the species (as well as being potentially the oldest living tortoise in the world presently).[1] 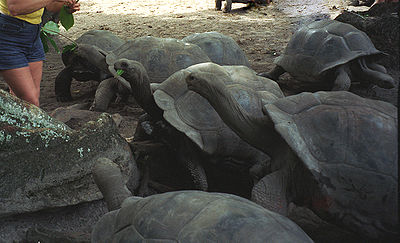