Chirk (Welsh: Y Waun) is a small town and local government community, the lowest tier of local government, part of Wrexham County Borough in Wales. It has a population of over 4,000.

It is situated between Wrexham and Oswestry and has been part of the County Borough since local government reorganisation in 1996. The border with the English county of Shropshire is immediately south of the town, on the other side of the River Dee.

The town is served by Chirk railway station. 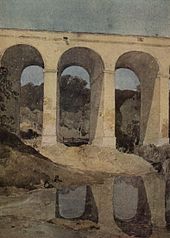 Chirk Castle, a National Trust property, is a medieval castle. Two families are associated with the town and its castle, the Trevor family of Brynkinallt and the Myddletons.

Attractions in the town apart from Chirk Castle include a section of Offa's Dyke and the Chirk Aqueduct on the Llangollen Canal, built in 1801 by Thomas Telford. The Glyn Valley Tramway operated from here.

The Parish Church of St Mary's is a Grade I listed building. The current church building was begun during the 11th Century by the Normans, although it is believed that an older llan, dedicated to St Tysilio, had existed on the site. Indeed, the current church was known by the dedication of St Tysilio until the late 15th or early 16th century, after which it was re-dedicated to St Mary. Today, the church is a member of the Open Church Network and participates in the Sacred Space Project.

Chirk was formerly a coal mining community with coal being worked since the 17th century. The largest of these collieries were Black Park (one of the oldest in the north of Wales) and Brynkinallt (Welsh: Bryncunallt). After the closure of these mines, an open-cast coal mine opened in the late 1980s. This coal mine has now also closed.

Chirk was a coaching stop on the old Mail coach route along the A5 from London to Holyhead.

The Chester to Ruabon railway had been extended south to Shrewsbury by 1848 with stations at Llangollen Road (at Whitehurst) and Chirk. South of the town a railway viaduct was constructed by Henry Robertson to take the line over the Ceiriog Valley.

The Llangollen branch of the Shropshire Union Canal runs through Chirk. The canal crosses the Ceiriog Valley (from England into Wales) along Thomas Telford's aqueduct. Telford's aqueduct runs alongside the Robertson' viaduct before the canal enters the Chirk Tunnel. 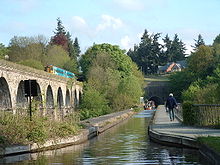 Looking towards Chirk over the Aqueduct and Viaduct 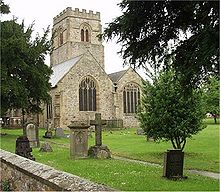 The Ceiriog Memorial Institute, in the Ceiriog valley, just west of Chirk, is home to a collection of Welsh cultural memorabilia and was founded in the early 1900s to support the Welsh language, culture and heritage for future generations.

The town's industries are the manufacture of wood-based panels at Kronospan and chocolate manufacture at Cadbury.