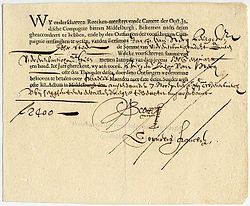 An example of a bond. Securities analysts may carry out research on bonds, stocks and any other type of security.

Securities research is a discipline within the financial services industry. Securities research professionals are known most generally as "analysts," "research analysts," or "securities analysts;" all the foregoing terms are synonymous. Securities analysts are commonly divided between the two basic kinds of securities: equity analysts (researching stocks and their issuers) and fixed income analysts (researching bond issuers). However, there are some analysts who cover all of the securities of a particular issuer, stocks and bonds alike.

Securities analysts are usually further subdivided by industry specialization (or sectors) -- among the industries with the most analyst coverage are biotechnology, financial services, energy, and computer hardware, software and services. Fixed income analysts are also often subdivided by asset class—among the fixed income asset classes with the most analyst coverage are convertible bonds, high yield bonds (see high-yield debt), and distressed bonds (see distressed securities). (Although technically not securities, syndicated bank loans typically fall within the domain of fixed income analysts, and are covered, as if they were bonds, by reference to the industry of their borrowers or asset class in which their credit quality would place them.)

In the broadest terms, securities analysts seek to develop, and thereafter communicate to investors, insights regarding the value, risk, and volatility of a covered security, and thus assist investors to decide whether to buy, hold, sell, sell short, or simply avoid the security in question or derivative securities (see: derivative). To gather the information required to do so, securities analysts review periodic financial disclosures (such as made by United States-listed issuers to the S.E.C.) of the issuer and other relevant companies, read industry news and use trading history and industry information databases, interview managers and customers of the issuer, and (sometimes) perform their own primary research.

Securities research falls into two broad categories: that provided by investment banks and that provided by independent equity research boutiques. The former group offer research as part of a broad set of financial services including broking and corporate finance. Independent equity research has largely sprung into existence as a result of scandals such as Enron, Lernout & Hauspie and Worldcom where investment banks wrote positive research despite deteriorating fundamentals or fraudulent management.

Research analysts produce reports and typically issue a recommendation: buy ("overweight"), hold, or sell ("underweight"). These reports can be accessed from a number of sources, and brokerages will often offer the reports free to their customers.[1]

Entrance into the profession, which is generally very well paid and prestigious, is highly competitive. Those who enter the profession at the junior level, typically have an undergraduate degree from a leading college or university and one to a few years of experience in some other discipline of finance or (lacking such experience) an MBA or other relevant advanced degree. Those who enter the field in a junior capacity, can progress to a senior capacity in a fairly brief period of time (two to four years) if they prove themselves talented; often such advancement is greatly aided by earning a Chartered Financial Analyst charter (which requires passage of three examinations). Many securities analysts have directly entered the profession at a more senior level; such persons typically have an MBA or other relevant advanced degree and a number of years of progressively responsible experience either in another finance profession, or in the industry which they will be covering as an analyst.

Securities analysts are generally employed in one of three capacities: sell-side analysts (who work for a broker-dealer and indirectly for broker-dealer's trading customers), buy-side analysts (who work for institutional investors, such as hedge funds, mutual funds, pension funds, proprietary trading operations of banks and brokers, endowments, and insurance companies), and independent analysts, who work for firms which sell research to sell-side and/or buy-side firms, but who do not themselves engage in securities transactions.

Buy-side analysts generally do their work in private; publishing research reports and issuing public opinions on a security is generally confined to sell-side and independent analysts. However, the amount of formally-published sell-side research is generally thought to be declining, as it becomes more difficult for brokers to gain a clear revenue stream from the investment. The direct connection between securities research and the underwriting of new issues, which enabled research analysts to claim a share of investment banking fees, was severed as a result of government investigations into excesses of some sell-side analysts in the late 1990s; see, for example, Henry Blodget. In actuality, even before the government probes, direct contact was always an official violation of rules and ethics. Attorneys and compliance personnel, together known as Chinese wall personnel, were instructed to hinder all "wall crossings" to the best of their ability. However, in the late 1990s this proved to be extremely difficult as well-connected research analysts found ways to go "over the wall."

In Hong Kong, investment professionals must pass the Paper 1 administered by the Hong Kong Securities Institute.[3] Passing this exam allows the individual to receive the Type 4 license to be a publishing research analyst in Hong Kong.[4]

Buy-side and independent research are generally unregulated. Sell-side research is subject to regulation by the securities authorities of the locales where it is performed. The large majority of all sell-side research is performed either in the United Kingdom or the United States. UK sell-side research is regulated by the Financial Services Authority. US sell-side research has a more complex regime of regulation. The U.S. Securities and Exchange Commission has prescribed certain relevant rules (among them Regulation AC and Regulation FD) but has generally delegated research regulation to the self-regulatory organizations. The principal SROs (the National Association of Securities Dealers and the New York Stock Exchange) have issued detailed regulations of equity research, and much more cursory regulation of fixed income research. (With respect to the latter, the NYSE and the NASD have re-delegated the substance of regulation to the broker-dealer trade group Securities Industry and Financial Markets Association as the merger successor of the Bond Market Association, to whom the role was originally assigned.) The impact upon securities research regulation of the pending merger of the NASD with the regulatory arm of the NYSE is as of yet uncertain.

In the immediate aftermath of the excesses of the 1990s referred to above, Eliot Spitzer, Governor of the State of New York, asserted a significant role in policing securities research performed by New York-based analysts; it is unclear whether oversight by the New York State Attorney General will become a long-term meaningful component of securities research. The going-forward conduct provisions of a master settlement agreement between (on the one hand) most of the aforesaid U.S. regulators and (on the other hand) many of the largest U.S. broker-dealers, is an important source of ongoing regulation, with the force of law for the broker-dealers who are party to it, and a strong, if not formally legally binding effect, on broker-dealers not party to it.