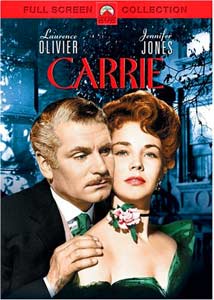 Directed by , the film stars Jennifer Jones in the title role and as Hurstwood. Carrie received two Nominations: Costume Design, () and Best Art Direction. Additionally, Laurence Olivier received a nomination for his performance.

The movie should not be confused with 's novel of the same name, nor with 's 1976 film version "Carrie", which is not a of Wyler's movie.

Carrie Meeber (Jennifer Jones) leaves her family in small rural town and heads to Chicago to make a better life for herself. Carrie is young and absolutely lovely which doesn't go unnoticed. On the train to Chicago, Charles Drouet () approaches her. Although Carrie is reluctant to speak to him, the salesman won't take no for an answer and the two chat until they reach Chicago. Carrie gets off in South Chicago, the slums as Charles Drouet points out, after taking Drouet's business card.

In South Chicago, Carrie stays with her sister, who is married and has one child. Her sister's husband takes $5 from her for room and board and Carrie works at a factory sewing shoes. But she soon injures herself because the manufacturer, in order to save money, keeps the lights very low and the women can barely see their fingers. When she gets her finger caught in the sewing machine she is fired. She is desperate. He brother-in-law is quite clear, if she doesn't pay for room & board she can't stay.

After an exhausting day of job hunting and with nothing to show for it Carrie looks up Charles Drouet, who of course is more than happy to see her. He not only talks her into having dinner with him at Fitzgerald's, an upscale restaurant, but also gives her $10. Carrie knows that this is more than "compromising" but she doesn't see any other possibilities.

Her sister tells her tells her that her husband wouldn't take "that kind of money." So Carrie, in order to stay at her sister, heads to Fitzgeralds to return the money to Drouet but there she meets George Hurstwood (), the manager of the restaurant, who is immediately smitten with her. Instead of taking the money and returning it on her behalf to Drouet, he brings the two together, seats them himself and sends them a fancy bottle of champagne on the house.

Carrie ends up moving in with Drouet. He is a big talker but he is pretty harmless. Carrie, although clearly not in love with Drouet, is relieved to be safe, to have a roof over her head, to have food on the table. She pressures Drouet to marry her, because the neighbors are talking about them. Drouet tries to skirt the issue but it is becoming more and more difficult so he tries to distract her and invites Hurstwood, whom he had ran into but sheer coincidence, into their home. They are having a lovely evening playing cards but it is obvious that Hurstwood is falling madly in love with Carrie.

Hurstwood's wife, who is absolutely evil, reminds her husband that every penny that he made, and he provided well for family, is in her name and that he would never see a nickel, still decides that love and happiness are more important than money and security. At the restaurant Hurstwood accidentally closes the safe which now can not be opened until the next morning and is now stuck with $10,000 in his hands. He hesitates but then decides to take the money to run away with Carrie. He leaves an I-O-Y intent on paying his boss back as soon as he made it on his own feet.

He coaxes Carrie out of the house, who refuses to see him, by telling her that Drouet had injured himself and that he would take her to see him. On the train to Drouet, Hurstwood tells her that he loves her and that the wants to be with her, asking her to leave Drouet. Carrie is torn, she does love Hurstwood and so she decides to stay with him.

The first few days are bliss but then reality catches up with them. Hurstwood's boss sends a though guy from the bond company after Hurstwood to collect the money Hurstwood took. Hurstwood who has already been looking for work finds out quickly that his boss has gotten to every restaurant owner and everyone knows that he "stole" money. Unable to find a job, Hurstwood and Carrie soon find themselves in dire poverty. But they are still madly in love and when Carrie finds out that she is pregnant the two think that things might take a turn for the better. But Hurstwood's wife shows up, wanting Hurstwood's signature allowing her to sell the house they own jointly. Hurstwood wants his share of the sales price but she says she will press charges against him for bigamie if he insists. Carrie is devastated. They had gotten married and she was sure he had gotten a divorce but that wasn't true. Hurstwood's wife refused to get a divorce and Hurstwood didn't know how to tell Carrie.

Hurstwood tells his wife, he will sign and won't ask for money if she'll grant him a divorce. She does but it is too late. Carrie lost the baby and soon she leaves him. even though she still loves him. But she feels it is for the best.

While Hurstwood drifts further and further into poverty and ends up in a homeless shelter, Carrie falls on her feet. She joins a dance troupe and soon becomes the lead attraction.

Hurstwood, entirely starved, visits her once, and she wants to take him back. She had found out from Drouet, that Hurstwood had taken the money to start a life with her. She wants to make it up to Hurstwood but he won't take more than a quarter and disappears.