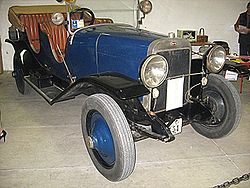 Diatto was an Italian car maker founded in 1905 in Turin but its history started 175 years ago.

1835-The year the company is founded. - In 1835, in Turin, on the banks of the river Po, Guglielmo Diatto founds a workshop for the construction of carriages for nobility. - The Diatto “Manifattura di Carrozze” (Carriage Manufacture) is already a large industrial concern, established over a vast area which is owned by the company.

- 1838-The first patent. - Guglielmo DIATTO, 33 years old, an inventive and enterprising craftsman, patents a ‘perfected wheel’, the first in a series of technological innovations that would make the fortunes of three generations of industrialists (the patent is held at the National Museum dell’Automobile in Turin, which displays a DIATTO car).

- AT THE START OF 1900. - 1905-Diatto veichles. - The engineers Vittorio and Pietro DIATTO, grandsons of the founder Guglielmo (the third generation of the dynasty of distinguished industrialists), decide to manufacture sports cars to sell to their vast international wealthy carriage customers. In Turin, on April 12, 1905, they found the “Società Diatto-A. Clement” in partnership with the French company A. Clément Bayard, from Levallois Perret, Paris. - The company has a workforce of 500 (by way of comparison Fiat has a workforce of 776) and produces cars, initially with engines with 4 and 6 cylinders and, after the first world war, also 8 cylinders with compressor, aluminium pistons with 4 valves, up to 6,000 cc.

- 1909-Diatto begins exporting internationally. - In 1909 the Diatto brothers buy the participation of their French partners and the name of the company changes in “Autocostruzioni Diatto”. - Also thanks to its sporting supremacy, DIATTO establishes an extensive sales network to guarantee sales and assistance worldwide for the “Queen of lightweight vehicles, fast, comfortable, elegant”. - From 1910 onwards exports in Europe reaches Spain, France, Switzerland, Austria, Germany, England, Poland and Russia, in North and South America, the Diatto arrive in Canada, the USA, Brazil, Cuba and Argentina and in Australia the vehicles are sold in Sydney and Melbourne.

- 1912-1915-Diatto is expanding fast and on the way to becoming one of the top Italian industrial groups. In 1915, in order to keep up with orders, Diatto acquires the Scacchi factory (founded in Chivasso -TO- in 1911 by Cesare Scacchi, previously a workshop supervisor at Fiat, has a workforce of 100 and built 5 cars a month), and Newton factory (previously Valt-Vetture Automobili Leggere Torino, founded in 1911 and subsequently acquired by the British industrialist John Newton). - Diatto transfers the workforce and plant to the new factory in Via Frejus (Turin) in order to expand its output, which is now over 40 units a month.

- Diatto also acquires a controlling share in the Italian engine manufacturer "Gnome & Rhone", the most important maker of aviation engines (200 per month) and owner of the patent for fighter-plane-rotary engines, and transfers its sophisticated technology to automotive production. - With its 9 cylinder rotary engines, Gnome & Rhone (Diatto owned), win the most prestigious cross-European prizes: - The Mediterranean crossing, the Gordon Bennet Cup, the Reims Meeting, the Raids of Friedrichshafen, Düsseldorf, Cuxhaven, Zeebrugge, Dunkerque. - Success and fame enable the company, at the outbreak of the Great War, to win enormous orders from around Europe: 5,000 aviation engines for Italy, Russia, France and England. - (Source, Motori, Aero, Cicli & Sports, 1915–1919): "The most illuminated science and the greatest experience in automotive and aviation mechanics”.

- 1907-1927-Diatto is the official supplier to the Italian Royal Family. - Thanks to its avant-garde technology and design, DIATTO conquers the favour of the Italian Royal Family - customer from 1907 - who, in 1910, purchases 4 vehicles, of which one is a sports car (source, Italian magazine MACS, February 1911), trust and confidence that will continue for 20 years, until 1927 (Registration document - 1927 - of a DIATTO belonging to the His Majesty the King of Italy is conserved in National Museum Automobile – Turin). - The family of the future champion and constructor Enzo Ferrari also becomes a DIATTO client. - Diatto cars were known for their innovative design and engineering.

- 1919-1932-First class design and performance. - The most famous designers in the world use DIATTO bodywork: Bertone, Castagna, Garavini, Ghia, Mulliner, Schieppati, Stabilimenti Farina, Zagato. From the press at the time: “The classic design of the DIATTO radiator, with its straight lines, its low chassis, elegantly fitted, for low streamlined vehicles, has been a lesson to others.”

- 1922-First “Pole position” at the Inauguration of the Autodrome at Monza. - 2002 – 80 years later, “Inauguration pole position” revisited. - In Autumn 1922, in front of Mussolini, the First Gran Premio d’Italia was held, the “Inaugural Race” to celebrate the opening of the brand new Monza Autodrome, which had been built in record time: in pole position were a Diatto, a Bugatti and a Fiat. - To celebrate the 80th anniversary of the Inaugural Race at Monza, in November 2002 the same line-up as the first Gran Premio d’Italia - Diatto, Bugatti and Fiat – raced against each other, an event which was enthusiastically reported by the sports press (Source: Corriere della sera, 12.11.2002).

- 2.15.1923-Nationalist British magazine "The Auto Motor Journal - Road-Trials”, compares the performance of 2-liter Diatto those of 3-liter Bentley compressor: a success for Diatto.

- 1932-Production of cars is suspended - In the early 1930s, after circa 8,500 automobiles produced, due to insuperable financial difficulties caused by the non-payment of the considerable military equipment supplied to the Italian kingdom for the first world war, DIATTO’s assembly lines are interrupted. - Spare parts continue to be produced until 1955.

- 1915–1925-DIATTO-BUGATTI. - Shortly before the first world war, Diatto begins working with Ettore Bugatti. - The Diatto 8-cylinder engine for the wartime aircraft industry is built on licence from Bugatti. - On September 23, 1916, Diatto sends an enthusiastic telegram to Bugatti: “Glad to tell you, excellent results from engine… tests concluded brilliantly at 210HP”.

- The magazines from the time reports the successful partnership widely: - “Official tests for the Diatto-Bugatti engine: a true technical masterpiece, incomparable precision, strength and excellence of the materials, the compendium of all modern progress”. - (source: 1916 - Motori, Aero, Cicli e Sports, Engine Diatto-Bugatti).

- Production of automobiles and racing cars Diatto-Bugatti. - After the first world war, the collaboration between Diatto and Bugatti is extended to the design and production of road and race cars.

In 1919, at the International Motor Shows of Paris (Diatto has a branch in the Champs-Elysées) and London, Diatto presents five top of the range cars, including the “16 valve Diatto 30”, featuring chassis designed by Bugatti: “Luxury cars, Convertibles and Coupés with internal steering, refined bodywork and antique silk and velvet upholstery. The Parisian upper classes, from Princess Murat to Madame Gould, bid against each other for the most luxurious Diatto-Bugatti cars at a price of 100,000 franks" (the price at the top, at the time). Also the Bugatti Type 23 is sold in Italy under Diatto brand (sources: 1988, Le Fanatique de l'automobile; 1999, The Automobile: the first 50 Diatto-Bugatti). Production of Diatto-Bugatti cars will continue for several years.

- (An excerpt from - Motori, Aero, Cicli e Sports,1919) “the names Diatto and Bugatti, with their long, sound tradition of mechanical engineering and daring innovation, brought together into a single enterprise, are extraordinarily eloquent and significant for any technician or automobile enthusiast”.

Thanks to this successful collaboration, Diatto and Bugatti agree to construct a special series of race cars, initially with a 25 HP Sport Diatto chassis modified with a tubular axle and a supercharged 1500cc 4-cylinder Bugatti engine.

- 1922-1926-DIATTO-MASERATI. - In 1922, DIATTO engages the driver and designer Alfieri Maserati, with his brother Ernesto, entrusting him the position of Racing Team Manager. Alfieri Maserati, at the head of the DIATTO Racing Team until 1926, wins numerous victories; 1922 Monza – 1st Grand Prix: Maserati wins class in a 3 litre Diatto, second Sivocci in an Alfa Romeo, than in Sicily, from the Targa to the Florio Cup, from the Cremona circuit to the Coppa della Consuma, from the Colline Pistoiesi to the Monza Gran Prix, from the Aosta-Gran San Bernardo to the Parma-Poggio di Berceto, from the Limonest to the Schabenberg in France, from the Gothenburg to the Bollans in Swiss, from the Rebassada to the Valencia in Spain, etc.

- From 1924 to 1925, Maserati, under the lead of the director of Diatto, eng. Coda, that Maserati called "my professor", realizes the first 8C, 2,000cc Diatto engine with compressor. The legendary supercharged, 160-HP, 8C, Diatto-Grand-Prix car with Schieppati bodywork is born. The car is unveiled by Maserati on 14 June 1925 at the inauguration of the famous “100 kph club”, an association founded by Diatto supporters at the Monza racetrack. Maserati drives a number of demonstration laps and to the enthusiasm of the crowd reached 180 km/h. Now, Maserati is mature to start the experience like constructor.

- The year after, in 1926, Maserati receives on payment some DIATTO Type 30 sport chassis, equipped with 8C engines, gears, suspensions and many mechanical parts. With these DIATTO rolling chassis and the vast technical and sporting know-how inherited from the DIATTO Racing Team, Maserati builds the first sports cars with the ‘Maserati’ brand (sources: 1985 - French magazine “Le Fanauto”, Automobile, Jenuary 1998, etc.)

- Diatto is considered one of the oldest luxury sport brand in the world, amongst the car manufactures.

DIATTO TODAY. Diatto presented the new Diatto "Ottovù" Zagato-design at Geneva motor show in 2007. Diatto is ranked amongst the most renowned supercars in the world, by international press;

Italy: AUTO DIGEST (road test Diatto Ottovù): "Diatto is a brand with an historic heritage, without doubt, gigantic; its industrial adventure has reached results not yet equal by any global automobile brand"

UK: THE NEWS OF THE WORLD has linked DIATTO to the famous actor Matt Damon who plays the spy Jason Bourne, just as the Aston Martin is linked to James Bond

CLASSIC CAR: road test of a 1923 Diatto 20 from a Japanese collection