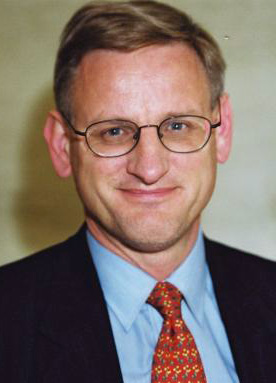 Audio|sv-Carl Bildt_new.ogg|Nils Daniel Carl Bildt, KCMG (born ) is a Swedish and . Formerly from 1991 to 1994 and leader of the liberal conservative from 1986 to 1999, Bildt has served as Swedish Minister for Foreign Affairs since . He has also been noted internationally as a mediator in the Balkan conflict, serving as the 's Special Envoy to the from June 1995, co-chairman of the Dayton Peace Conference in November 1995 and as from December 1995 to June 1997 immediately after the . From 1999 to 2001, he served as the 's Special Envoy for the Balkans.

Bildt was born in , , and belongs to an old Norwegian-Danish-Swedish traditionally domiciled in county. His great-great-grandfather, Baron , served as Prime Minister a century earlier and as a diplomat as well as Lord High Constable of Sweden ("riksmarskalk"). His great-grandfather GeneralKnut Bildt was chief of the general staff. His great-grandfather's brother Carl Bildt served in the Ministry of Foreign Affairs as Cabinet - Secretary (Under secretary of state of foreign affairs, in Swedish "kabinettssekreterare") and was a renowned diplomat and member of the Swedish Academy . Bildt's grandfather Nils Bildt was a Colonel and chief of the Halland Regiment. It is interesting to note that Colonel Bildt and his family were neighbours to the Palme family. Bildt's father Daniel Bildt (born 1920) is a former major in the reserves of the now defunct Halland Regiment ("Hallands Regemente") and a former bureau director in the now defunct Civil Defense Board's Education Bureau. He married Kerstin Andersson - Alwå in 1947 . Bildt has a brother - Nils, who was born in 1952. Bildt himself was married to Kerstin Zetterberg 1974 - 1975, Mia Bohman (daughter of former Moderate party leader and Minister of Economy, Gösta Bohman) 1984 - 1997 and is currently married to Anna Maria Corraza since 1998. From his second marriage he has the children Gunnel (born 1989) and Nils (born 1991). From his third marriage he has the son Gustaf (born 2004). The family's perhaps most prominent lineage comes from Norway, where at least three of his ancestors have been that country's leaders in a position comparable with a modern PM: in 16th century, his ancestor () served as and another ancestor, , as of the kingdom of Norway; and then in 17th century, yet one ancestor, served as , and was himself descended from king (the king and his forefathers thus also being Bildt's ancestors) through his daughter "Agnes Hakonardottir", Dame of .

Bildt served as chairman of the FMSF , a student organisation, in the early 1970s. When the non-socialist formed government in 1976, Bildt came to serve as the Moderate party coordinator in his capacity as close collaborator of the then party leader and Minister of Economy Gösta Bohman. Bildt became a Member of Parliament in 1979, although he instead served as State Secretary for Policy Coordination in the non-socialist government reformed after that election. As an MP in the early eighties, he became noted as an incisive and combative debater on foreign affairs, and found himself pitted against Prime Minister . Bildt was elected leader of the Moderate Party in 1986, succeeding . In 1991 the Social Democrats were defeated by a four-party coalition led by Bildt's Moderates.

Economic reforms were enacted, including voucher schools, liberalized markets for telecommunications and energy as well as the privatization of publicly owned companies, privatization of health care, contributing to liberalizing the Swedish economy. Arguably, the subsequent budget cut-backs with the Social Democrates, and after 1994, continued spending cuts by the Social Democratic government, did more to reform the Swedish economy and the Swedish model, than Bildt's governments programme as such. The government's effectivness was furthermore hampered as it was plagued by in-fighting, most memorably over the construction of the .

The period was also marked by a severe economic crisis. [Between 1990 and 1994, per capita income declined by approximately 10% – http://hdr.undp.org/docs/publications/ocational_papers/oc26c.htm] In November 1992, the crisis reached its climax as Sweden left the (the ) and let the Krona float, after having defended the fixed exchange rate at tremendous cost. The, in some people's opinion, single-minded defense of the Krona, led to and continues to draw heavy criticism. At the peak of the crisis and amid run-away budget deficits, a number of emergency cut-backs were negotiated with the Social Democrats. The different measures did contribute to a reduction in the public deficit in 1994 and 1995, and allegedly to revived growth in subsequent years. There is still some debate on whether the current (2006) growth levels are in part due to the devaluation of the Krona. Some see the increased importance of the export industry as testament to this.Fact|date=February 2007

The Social Democrats returned to power in September 1994, although Bildt's Moderate Party scored a slight gain.

After his term as Prime Minister, Bildt was active as a mediator in the conflict, serving as the Special Envoy to Former Yugoslavia from June 1995, Co-Chairman of the Dayton Peace Conference in November 1995, and High Representative in from December 1995 to June 1997 immediately after the . From 1999 to 2001, he served as the Secretary General's Special Envoy for the Balkans.

On , , Bildt was appointed as Minister of Foreign Affairs in the newly formed government lead by Prime Minister . This was seen by many as a somewhat surprising move, because Bildt had already served both as Prime Minister and as leader of the Moderate Party and the previous conflict between Bildt and Reinfeldt.Fact|date=April 2007

The opposition parties and other politicians as well as newspaper columnists have questioned Carl Bildt’s suitability as Sweden’s Foreign Minister for his private stands on international issues as well as his private affairs as a businessman with interest in n gas giant , and , an oil company with activities in war-torn . [PM Nilsson, [http://expressen.se/index.jsp?a=827463 "Bildt måste gå"] , "", January 11, 2007 sv icon] [, [http://expressen.se/index.jsp?a=832593 "Bildt måste byta politik eller avgå"] , "", January 15, 2007 sv icon]

After having left his political position as leader of the Moderate Party in 1999, apart from being engaged on international issues, Bildt took up a number of private sector positions as well as with international think-thanks.

In the corporate sector in the US, he served as non-executive director of the Baltimore-based US assets management company

Among Swedish-dominated companies, he served as Chairman of the Board of Teleopti AB as well as of the public affairs consultancy AB, and Board member of the IT consultancy HiQ AB. He was also Chairman of Nordic Venture Network, bringing Nordic high-tech VC firms together in an informal network.

In 2002 Bildt joined the board of directors of , a financial company primarily with holdings in . Bildt was also a member of the board of independent oil company .

He left the board of directors of all these functions upon becoming Foreign Minister in October 2006.

Bildt has been criticized due to the potential conflict of interest due to his previous position in Vostok Nafta, although Bildt could not divest the he has until the first two weeks of December 2006. Among other things the Swedish government has to decide whether or not to lend its support to the construction of a Russian gas pipeline in the near the Swedish island of . This conflict of interest might also affect relations between Sweden, other countries and Russia, since many EU countries are dependent on Russian oil and gas for their energy needs. [ [http://www.affarsvarlden.se/art/151415 Bildt gör miljonklipp på ryska gasoptioner] , Affärsvärlden, October 11, 2006 sv icon] [ [http://www.dn.se/DNet/jsp/polopoly.jsp?d=1042&a=581977&previousRenderType=1 Bildts aktieinnehav "omdömeslöst"] , Dagens Nyheter, October 19, 2006 sv icon] On , , a Member of Parliament for the Green Party, reported the Foreign Minister to the Riksdag Constitutional Committee in order to determine whether Bildt's private economic affairs might represent a conflict of interest. , Secretary General for the Swedish section of , has also criticized Bildt since Human Rights issues are within the portfolio of the Minister for Foreign Affairs. [ [http://www.svd.se/dynamiskt/inrikes/did_13899985.asp Bildt KU-anmäls för aktieinnehav] , Svenska Dagbladet, October 20, 2006 sv icon] However, the criticism against Bildt for his interests subsided after he announced his intentions of divesting himself of all financial ties with the company as soon as is possible. The work by the Constitutional Committee of the Parliament could not find any grounds for questioning the activities of Bildt in these regards. It also came to light that the Swedish state pension funds ( _sv. AP-fonderna) together had invested more than a billion (140 million USD or 75 million GBP) in Vostok Nafta. [AP-fonder investerar i Vostok Nafta [http://www.aftonbladet.se/vss/telegram/0,1082,68196766_854__,00.html] , Aftonbladet, November 4, 2006 sv icon]

In June 2007 a preliminary investigation was started against Bildt for him not having deleted comments against in his . One commentator had called Palestinians "devil's offspring" and "lesser standing than cockroaches" and another had written "give us 24 hours and all Palestinians are gone and we have 100 percent of Israel". [Mikael Stengård, [http://www.aftonbladet.se/nyheter/article528801.ab "Förundersökning mot Carl Bildt"] , "", June 21, 2007 sv icon] Subsequently, no grounds were found for suspicions against Bildt in these regards.

On April, 8th, 2008, during his visit in Israel and Palestinian Autonomy, Bildt gave an interview to Swedish state radio, in the course of which he compared former Israeli Prime Minister with and proposed "to make peace without both". Israeli officials condemned the comparison. [http://www.jpost.com/servlet/Satellite?cid=1207649975283&pagename=JPost%2FJPArticle%2FShowFull]

Following his statements during the where he compaired the and to s Germany the Russian Foreign Ministry announced that Bildt is nolonger considered welcome in Moscow.

Bildt was an early pioneer among politicians of using the for communicating. On , , he sent an to U.S. president , which was the first (as what is publicly known) ever electronic mail sent between two heads of government. In the e-mail he praised Clinton's decision to end the on . [ [http://www.bildt.net/index.asp?artid=263 "First Email Bildt to Clinton"] , bildt.net]

In the same year he also started a weekly electronic newsletter, which was still active until 2005. He also been active as a ger, starting his first blog in February 2005. His current blog, started in January 2007, is one of the most widely read political blogs in Sweden.

On he officially opened a "Swedish embassy" in the "". [Simmons, Carl, [http://www.sweden.se/templates/cs/Article____16345.aspx Sweden opens virtual embassy 3D-style] , Sweden.se, 2007-05-30] The embassy, called "Second House of Sweden", is a virtual replica of , the Swedish embassy building in .

During Bildt's time as Foreign Minister the Ministry of Foreign Affairs has opened up a channel on YouTube which has been active since early 2008 .

Bildt was awarded of the 12th size in 2003. He is a Commander of the and has been awarded a from the .