The Addams Family is an American television series based on the characters in Charles Addams' New Yorker cartoons. The 30-minute series was shot in black-and-white and aired for two seasons in 64 installments on ABC from September 18, 1964, to April 8, 1966. It is often compared to its working-class rival, The Munsters, which ran for the same two seasons and achieved somewhat higher Nielsen ratings. The Addams Family ranked 23rd in its first season, with a 23.9 rating.[2] The show is the first adaptation of the characters to feature The Addams Family Theme.

It was originally produced by Filmways, Inc. at General Service Studios in Hollywood, California. Successor company MGM Television (via The Program Exchange for broadcast syndication, 20th Century Fox Home Entertainment for home video/DVD) owns the rights to the show. At one point, distribution rights were licensed to Worldvision Enterprises.

The Addamses are a close-knit extended family with decidedly macabre interests. They are humans with supernatural abilities. No explanation for their powers is explicitly given in the series.

The very wealthy, endlessly enthusiastic Gomez Addams is madly in love with his refined wife Morticia. Along with their two children, Wednesday (a girl) and Pugsley (a boy), Uncle Fester and Grandmama, they reside in an ornate, gloomy, Second Empire-style mansion, attended by their servants, Lurch, the towering butler, and Thing, a hand that usually appears out of a small wooden box. Occasionally, episodes would feature relatives or other members of their weird subculture, such as Cousin Itt or Morticia's older sister, Ophelia. 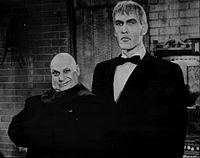 Much of the humor derives from their culture clash with the rest of the world. They invariably treat normal visitors with great warmth and courtesy, even though their guests often have evil intentions. They are puzzled by the horrified reactions to their (to them) good natured and normal behavior since they are under the impression that their tastes are shared by most of society. Accordingly they view "conventional" tastes with generally tolerant suspicion. For example, Fester once cites a neighboring family's meticulously maintained petunia patches as evidence that they are "nothing but riff-raff." Ironically, many of the things that the Addams family was in favor of that seemed laughable in the mid-1960s have become mainsteam. Homeschooling, protection of swamps (now Federally protected as wetlands), banning of toy guns, and banning of classic fairy tales in schools were all plotlines in the show that were comic fodder at the time. A recurring theme in the epilogue of many episodes was the Addamses getting an update on the most recent visitor to their home, either via something in the newspaper or a phone call. Invariably, as a result of their visit to the Addamses, the visitor would be institutionalized, change professions, move out of the country, or have some other negative life-changing event. The Addamses would always misinterpret the update and see it as good news for that most recent visitor.

The tone was set by series producer Nat Perrin, close friend of Groucho Marx and writer of several Marx Brothers films. Perrin created story ideas, directed one episode, and rewrote every script. Much of the dialog is his (albeit uncredited). As a result, Gomez, with his sardonic remarks, backwards logic, and ever-present cigar (pulled from his breast pocket already lit), has been frequently compared to Groucho Marx. In addition, the series often employed the same type of zany satire and screwball humor seen in the Marx Brothers films. It lampooned politics ("Gomez, The Politician" and "Gomez, The People's Choice"), the legal system ("The Addams Family in Court"), Beatlemania ("Lurch, The Teenage Idol"), and Hollywood ("My Fair Cousin Itt"). 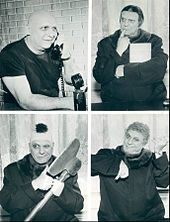 Fester finds buying a hairpiece is not so simple.

A reunion film, Halloween with the New Addams Family [5], aired on NBC in October 1977 and starred most of the original cast, except for Blossom Rock (Grandmama), who was very ill at the time and was replaced by Phyllis actress Jane Rose. Elvia Allman portrayed Grandma Hester Frump in the special who was previously played by Margaret Hamilton. On a related note, Parley Baer (who had previously played Mayor Arthur J. Henson in the TV show) portrayed the special's main villain "Bones" Lafferty. The picture also featured extended family members who were created specifically for the production and never appeared in the television series, such as Gomez's brother, Pancho (played by Henry Darrow) and two additional children, Wednesday Junior and Pugsley Junior. It was originally intended for a pilot for a sequel, but no other episodes were ordered.

As of May 2009, the show can be purchased on iTunes, and can be streamed for free in the US on Netflix, IMDB, YouTube, Hulu, and Minisodes are available on Crackle. MGM Home Entertainment has released The Addams Family on DVD in Region 1, 2 and 4 in three volume sets.