Another part of Mesoamerican architecture is its iconography. The monumental architecture of Mesoamerica was decorated with images of religious and cultural significance, and also in many cases with writing in some of the Mesoamerican writing systems. Iconographic decorations and texts on buildings are important contributors to the overall current knowledge of pre-Columbian Mesoamerican society, history and religion. 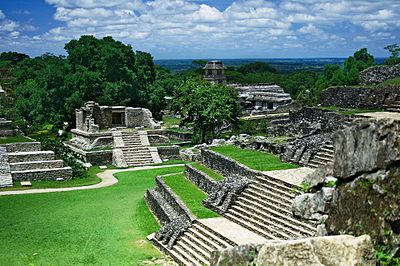 Overview of the central plaza of the Mayan city of Palenque (Chiapas, Mexico), an example of Classic period Mesoamerican Architecture 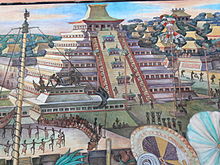 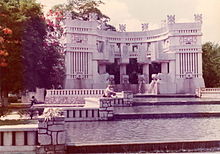 Preserved Aztec architecture in a mall in Mexico City. 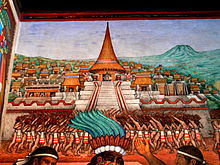 The following tables shows the different phases of Mesoamerican Architecture and archeology and correlates them with the cultures, cities, styles and specific building that are notable from each period.

Cosmos and its replication 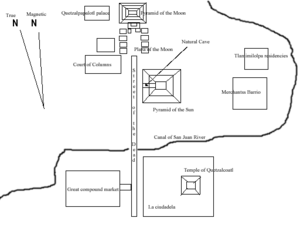 The lay out of the city of Teotihuacan, showing that the entire city is laid out following a north/south axis aligned 15 degrees off, and which is marked by the "Street of the dead" The pyramid of the sun is in the center, built on a natural cave. The southern part is residential quarters, and the northern part is the ceremonial center used for among other things human sacrifice. 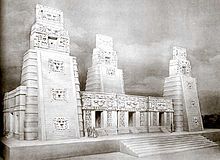 Model of structure I of the Maya site of Xpuhil.

An important part of the Mesoamerican religious system was replicating their beliefs in concrete tangible forms, in effect making the world an embodiment of their beliefs [1]. This meant that the Mesoamerican city was constructed to be a microcosm, manifesting the same division that existed in the religious, mythical geography—a division between the underworld and the human world. The underworld was represented by the direction north and many structures and buildings related to the underworld, such as tombs, are often found in the city's northern half. The southern part represented life, sustenance and rebirth and often contained structures related to the continuity and daily function of the city state, such as monuments depicting the noble lineages, or residential quarters, markets etc. Between the two halves of the north/south axis was the plaza, often containing stelae resembling the world tree the Mesoamerican axis mundi, and a ballcourt which served as a crossing point between the two worlds.

Some Mesoamericanists argue that in religious symbolism the Mesoamerican monumental architecture pyramids were mountains, stelae were trees, and wells, ballcourts and cenotes were caves that provided access to the underworld.[2].

Mesoamerican architecture is often designed to align to specific celestial events. Pyramids, temples, and other structures were designed to achieve special lighting effects on the equinoxes or on other days important in the Mesoamerican cosmovision. A famous example is the "El Castillo" pyramid at Chichen Itza, whose stairway catches the light so as to cause the carved serpents lining the sides to appear to writhe.

Much Mesoamerican architecture is also aligned to roughly 15° east of north.[3] Vincent H Malmstrom has argued[4] that this is because of a general wish to align the pyramids to face the sunset on August 13, which was the beginning date of the Maya Long Count calendar.

At the heart of the Mesoamerican city were large plazas surrounded by the most important governmental and religious buildings, such as the royal acropolis, great pyramid temples and occasionally ballcourts.

Often the most important religious temples sat atop the towering pyramids, presumably as the closest place to the heavens. While recent discoveries point toward the extensive use of pyramids as tombs, the temples themselves seem to rarely, if ever, contain burials. Residing atop the pyramids, some of over two-hundred feet, such as that at El Mirador, the temples were impressive and decorated structures themselves. Commonly topped with a roof comb, or superficial grandiose wall, these temples might have served as a type of propaganda. 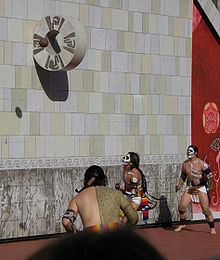 The Mesoamerican ballgame ritual was a symbolic journey between the underworld and the world of the living, and many ball courts are found in the mid-part of the city functioning as a connection between the northern and southern halves of the city.[5] All but the earliest ballcourts are masonry structures. Over 1300 ballcourts have been identified, and although there is a tremendous variation in size, they all have the same general shape: a long narrow alley flanked by two walls with horizontal, sloping, and sometimes vertical faces. The later vertical faces, such as those at Chichen Itza and El Tajin, are often covered with complex iconography and scenes of human sacrifice (see photo here).

Although the alleys in early ballcourts were open-ended, later ballcourts had enclosed end-zones, giving the structure an

-shape when viewed from above. The playing alley may be at ground level, or the ballcourt may be "sunken".

Ballcourts were no mean feats of engineering. One of the sandstone stones on El Tajin's South Ballcourt is 11 m long and weighs more than 10 tons.[6] 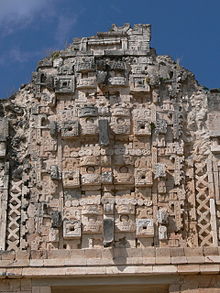 Large and often highly decorated, the palaces usually sat close to the center of a city and housed the population's elite. Any exceedingly large royal palace, or one consisting of many chambers on different levels might be referred to as an acropolis. However, often these were one-story and consisted of many small chambers and typically at least one interior courtyard; these structures appear to take into account the needed functionality required of a residence, as well as the decoration required for their inhabitants stature. Archaeologists seem to agree that many palaces are home to various tombs. At Copán, beneath over four-hundred years of later remodeling, a tomb for one of the ancient rulers has been discovered and the North Acropolis at Tikal appears to have been the site of numerous burials during the Terminal Pre-classic and Early Classic periods. 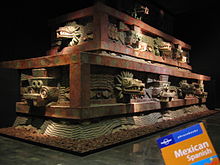 Teotihuacan style architecture displaying decorative ornamentation made of jade, gold and marble inlaid into a granite surface set upon a red painted limestone base.

A surprising aspect of the great Mesoamerican structures is their lack of many advanced technologies that would seem to be necessary for such constructions. Lacking metal tools, Mesoamerican architecture required one thing in abundance: manpower. Yet, beyond this enormous requirement, the remaining materials seem to have been readily available. They most often utilized limestone, which remained pliable enough to be worked with stone tools while being quarried, and only hardened once removed from its bed. In addition to the structural use of limestone, much of their mortar consisted of crushed, burnt, and mixed limestone that mimicked the properties of cement and was used just as widely for stucco finishing as it was for mortar. However, later improvements in quarrying techniques reduced the necessity for this limestone-stucco as their stones began to fit quite perfectly, yet it remained a crucial element in some post and lintel roofs. Palaces and monumental structures tended to use granite as a base material as well which was usually polished after completion although Jade, Marble and even gold have been found in decorative sections or pyrimids and other notable structures. In the case of the common houses, wooden poles, adobe, and thatch were the primary materials; however, instances of what appear to be common houses of limestone have been discovered as well. Buildings were typically finished with high slanted roofs similar to those found in Asian architecture usually built of wood or thatch although granite and limstone roofs in these high slant fashions are also used rarely.

An architectural construction technique that employs large dry-laid limestone blocks (ca. 1 m x 50 cm x 30 cm) covered with a thick layer of stucco. This style was common in the northern Maya lowlands from the Preclassic until the early parts of the Early Classic.

Pyramids in Mesoamerican were platformed pyramids and many used a style called talud-tablero, which first became common in Teotihuacan. This style consists of a platform structure, or the "tablero," on top of a sloped "talud". Many different variants on the talud-tablero style arose throughout Mesoamerica, developing and manifesting itself differently among the various cultures. 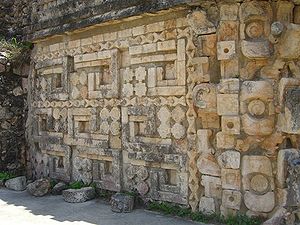 Puuc-style geometric design on a wall of the great temple of Uxmal.

So named after the Puuc hills in which this style developed and flourished during the latter portion of the Late Classic and throughout the Terminal Classic in the northern Maya lowlands, Puuc architecture consists of veneer facing stones applied to a concrete core. Two façades were typically built, partitioned by a ridge of stone. The blank lower façade is formed by flat cut stones and punctuated by doorways. The upper partition is richly decorated with repeating geometric patterns and iconographic elements, especially the distinctive curved-nosed Chaac masks. Carved columnettes are also common.

the principle of the "false" or corbelled arch is to build it without a keystone, but just with overlapping tiers of blocks

A fine example of a corbelled arch from the mayan site of Uxmal, Yucatán

Mesoamerican cultures never invented the keystone, and so were unable to build true arches, but instead all of their architecture made use of the "false" or Corbelled arch. These arches are built without centering and can be built without support, by corbelling regularly the horizontal courses of the wall masonry. This type of arch supports much less weight than a true arch.

A number of important archeological sites representing Mesoamerican Architecture have been categorized as "world heritage sites" by the UNESCO[7].