Dead Souls (Russian: Мёртвые души, myortvyje dushi) is a novel by Nikolai Gogol, first published in 1842, and widely regarded as an exemplar of 19th-century Russian literature. Gogol himself saw it as an "epic poem in prose", and within the book as a "novel in verse". Despite supposedly completing the trilogy's second part, Gogol destroyed it shortly before his death. Although the novel ends in mid-sentence (like Sterne's Sentimental Journey), it is usually regarded as complete in the extant form.[1]

In the Russian Empire, before the emancipation of the serfs in 1861, landowners were entitled to own serfs to farm their land. Serfs were for most purposes considered the property of the landowner, and could be bought, sold or mortgaged, as any other chattel. To count serfs (and people in general), the measure word "soul" was used: e.g., "six souls of serfs". The plot of the novel relies on "dead souls" (i.e., "dead serfs") which are still accounted for in property registers. On another level, the title refers to the "dead souls" of Gogol's characters, all of which visualise different aspects of poshlost (an untranslatable Russian word which is perhaps best rendered as "self-satisfied inferiority", moral and spiritual, with overtones of middle-class pretentiousness, fake significance and philistinism).

The first part of the novel was intended to represent the Inferno of the modern-day Divine Comedy. Gogol revealed to his readers an encompassing picture of the ailing social system in Russia after the war of 1812. As in many of Gogol's short stories, the social criticism of Dead Souls is communicated primarily through absurd and hilarious satire. Unlike the short stories, however, Dead Souls was meant to offer solutions rather than simply point out problems. This grander scheme was largely unrealized at Gogol's death; the work was never completed, and it is primarily the earlier, darker part of the novel that is remembered.

In their studies of Gogol, Andrey Bely, D. S. Mirsky, Vladimir Nabokov, and other modernist critics rejected the commonly held view of Dead Souls as a reformist or satirical work. For instance, Nabokov regarded the plot of Dead Souls as unimportant and Gogol as a great writer whose works skirted the irrational and whose prose style combined superb descriptive power with a disregard for novelistic clichés. True, Chichikov displays a most extraordinary moral rot, but the whole idea of buying and selling dead souls is, to Nabokov, ridiculous on its face; therefore, the provincial setting of the novel is a most unsuitable backdrop for any of the progressive, reformist or Christian readings of the work. 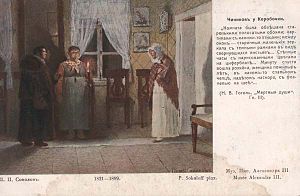 The structure of the novel follows a circle, as Chichikov visits the estates of landowners living around the capital of a guberniya. Although Gogol aspired to emulate the Odyssey, many critics derive the structure of Dead Souls from the picaresque novels of the 16th and 17th centuries in that it is divided into a series of somewhat disjointed episodes, and the plot concerns a gentrified version of the rascal protagonist of the original picaresques.

Konstantin Aksakov was the first to bring out a detailed juxtaposition of Gogol's and Homer's works: "Gogol's epic revives the ancient Homeric epic; you recognize its character of importance, its artistic merits and the widest scope. When comparing one thing to another, Gogol completely loses himself in the subject, leaving for a time the occasion that gave rise to his comparison; he will talk about it, until the subject is exhausted. Every reader of The Iliad was struck by this device, too." Nabokov also pointed out to the Homeric roots of the complicated absurdist technique of Gogol's comparisons and digressions.

Of all Gogol's creations, Chichikov stands out as the incarnation of poshlost. His psychological leitmotiv is complacency, and his geometrical expression roundness. He is the golden mean. The other characters — the squires Chichikov visits on his shady business — are typical "humors" (for Gogol's method of comic character drawing, with its exaggerations and geometrical simplification, is strongly reminiscent of Ben Jonson's). Sobakevich, the strong, silent, economical man, square and bearlike; Manilov, the silly sentimentalist with pursed lips; Mme Korobochka, the stupid widow; Nozdryov, the cheat and bully, with the manners of a hearty good fellow — are all types of eternal solidity. Plyushkin, the miser, stands apart, for in him Gogol sounds a note of tragedy — he is the man ruined by his "humor"; he transcends poshlost, for in the depth of his degradation he is not complacent but miserable; he has a tragic greatness. The elegiac description of Plyushkin's garden was hailed by Nabokov as the pinnacle of Gogol's art.

The story follows the exploits of Chichikov, a gentleman of middling social class and position. Chichikov arrives in a small town and quickly tries to make a good name for himself by impressing the many petty officials of the town. Despite his limited funds, he spends extravagantly on the premise that a great show of wealth and power at the start will gain him the connections he needs to live easily in the future. He also hopes to befriend the town so that he can more easily carry out his bizarre and mysterious plan to acquire "dead souls." 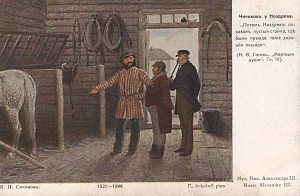 The government would tax the landowners on a regular basis, with the assessment based on how many serfs (or "souls") the landowner had on their records at the time of the collection. These records were determined by census, but censuses in this period were infrequent, far more so than the tax collection, so landowners would often find themselves in the position of paying taxes on serfs that were no longer living, yet were registered on the census to them, thus they were paying on "dead souls." It is these dead souls, manifested as property, that Chichikov seeks to purchase from people in the villages he visits; he merely tells the prospective sellers that he has a use for them, and that the sellers would be better off anyway, since selling them would relieve the present owners of a needless tax burden.

Although the townspeople Chichikov comes across are gross caricatures, they are not flat stereotypes by any means. Instead, each is neurotically individual, combining the official failings that Gogol typically satirizes (greed, corruption, paranoia) with a curious set of personal quirks.

Chichikov's macabre mission to acquire "dead souls" is actually just another complicated scheme to inflate his social standing (essentially a 19th century Russian version of the ever-popular "get rich quick" scheme). He hopes to collect the legal ownership rights to dead serfs as a way of inflating his apparent wealth and power. Once he acquires enough dead souls, he will retire to a large farm and take out an enormous loan against them, finally acquiring the great wealth he desires.

Setting off for the surrounding estates, Chichikov at first assumes that the ignorant provincials will be more than eager to give their dead souls up in exchange for a token payment. The task of collecting the rights to dead people proves difficult, however, due to the persistent greed, suspicion, and general distrust of the landowners. He still manages to acquire some 400 souls, and returns to the town to have the transactions recorded legally.

Back in the town, Chichikov continues to be treated like a prince amongst the petty officials, and a celebration is thrown in honour of his purchases. Very suddenly, however, rumours flare up that the serfs he bought are all dead, and that he was planning to elope with the Governor's daughter. In the confusion that ensues, the backwardness of the irrational, gossip-hungry townspeople is most delicately conveyed. Absurd suggestions come to light, such as the possibility that Chichikov is Napoleon in disguise or the notorious and retired 'Captain Kopeikin,' who had lost an arm and a leg during a war. The now disgraced traveller is immediately ostracized from the company he had been enjoying and has no choice but to flee the town in disgrace.

Mikhail Bulgakov adapted the novel for the stage for a production at the Moscow Art Theatre. The seminal theatre practitioner Constantin Stanislavski directed the play, which opened on 28 November 1932.[2]

The extant sections of Dead Souls formed the basis for an opera in 1976 by Russian composer Rodion Shchedrin. In it Shchedrin captures the different townspeople with whom Chichikov deals in isolated musical episodes, each of which employs a different musical style to evoke the character's particular personality.

The novel was adapted for screen in 1984 by Mikhail Shveytser as a television miniseries Dead Souls.

In 2006 the novel was dramatised for radio in two parts by the BBC and broadcast on Radio 4. It was played more for comic than satirical effect, the main comedy deriving from the performance of Mark Heap as Chichikov and from the original placing of the narrator. Michael Palin narrates the story, but is revealed actually to be following Chichikov, riding in his coach for example, or sleeping in the same bed, constantly irritating Chichikov with his running exposition.

This article incorporates text from D.S. Mirsky's "A History of Russian Literature" (1926-27), a publication now in the public domain.