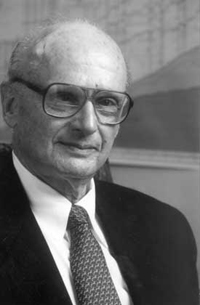 Harry Max Markowitz (born , ) is an at the at the . He is best known for his pioneering work in , studying the effects of asset , and diversification on expected investment portfolio returns.

Markowitz chose to apply mathematics to the analysis of the as the topic for his dissertation. Jacob Marschak, who was the thesis advisor, encouraged him to pursue the topic, noting that it had also been a favourite interest of , the founder of the Cowles Commission. While researching the then current understanding of stock prices, which at the time consisted in the model of , Markowitz realized that the theory lacks an analysis of the impact of risk. This insight lead to the development of his seminal theory of portfolio allocation under uncertainty, published in 1952 by the ""

In 1952 Harry Markowitz went to work for the , where he met . With Dantzig's help, Markowitz started to research optimisation techniques, developing the for the identifications of the optimal mean-variance portfolios, lying on what was later named the . In 1955 he received a PhD from the University of Chicago with a thesis on the portfolio theory. The topic was so novel that, while Markowitz was defending his dissertation, Milton Friedman jokingly argued that portfolio theory was not economics

Markowitz won the in 1990 while a professor of finance at of the . He currently serves on the advisory panel of 's , based investment management firm, and on the Advisory Board of Mark Hebner's Irvine, California and internet based investment advisory firm, Index Funds Advisors (ifa.com).

The company that would become CACI Int'l was founded by Herb Karr and Harry Markowitz as California Analysis Center, Inc. 7/17/62. They helped develop SIMSCRIPT, the first simulation programming language, at RAND. After it was released to the public domain, CACI was founded to provide support and training for it.

A Markowitz Efficient Portfolio is one where no added diversification can lower the portfolio's risk for a given return expectation (alternately, no additional expected return can be gained without increasing the risk of the portfolio). The Markowitz Efficient Frontier is the set of all portfolios that will give the highest expected return for each given level of risk. These concepts of efficiency were essential to the development of the .

Markowitz also co-edited the textbook "The Theory and Practice of Investment Management" with of .