The Counter-Earth is a hypothetical body of the Solar system first hypothesized by the presocratic philosopher Philolaus to support his non-geocentric cosmology, in which all objects in the universe revolve around a Central Fire. The Greek word "Antichthon" means "Counter-Earth."

The need for a Counter-Earth 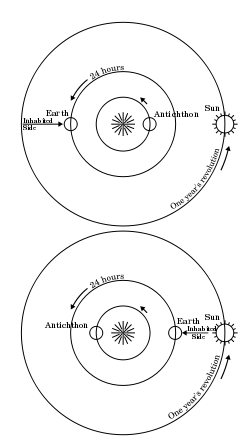 By 500 BC[1] most contemporary philosophers considered the Earth to be spherical[2] — there was obvious evidence for this from the behavior of objects near the horizon. This meant that all objects on the surface of the Earth had to be attracted to its center in some way; otherwise, they would fall off. It also required other objects, such as the stars and planets, to float above the earth in relation to its center, because otherwise they would presumably move rapidly away. This argument — reasonable in view of the data available at the time — resulted in a geocentric world view.

When the movements of celestial objects convinced Philolaus that the world must be not only turning on its own axis but revolving around a fixed point elsewhere in space, he was faced with the problem of explaining how a spherical world could move in this way without spilling everything on the surface into space. He came to the conclusion that the directions of up and down do not exist in space, except in that all things must fall towards the center of the universe, around which all things (including the Earth, Sun, and all the planets) must revolve. As such, the Earth would be a flat world and the underside of the world would face this fiery, central point at all times.

This created a contradiction within the Pythagorean school of thought. Since planets, in their understanding, were composed of a fiery or ethereal matter having little or no density, they could quite easily rotate eccentric to the Earth without becoming off balance. However, the Earth was obviously made of the dense elements of Earth and Water. If there were a single Earth revolving at some distance from the center of space, the universe's center of balance would not coincide with its spatial center. Since this is the point towards which things fall, the earth must have a counter-balance of the same mass or the universe would be flung apart. This problem led Philolaus to develop the idea of a Counter-Earth, a second, flat Earth, identical but opposite to ours in every way. This conception of the solar system is outlined in the diagram at the right, with Counter-Earth referred to as Antichthon. The upper illustration depicts Earth at night while the lower one depicts Earth in the day. (In order to prevent confusion, the diagram fails to show that Earth and Counter-Earth are flat and point away from the Central Fire). It is likely that Philolaus believed that the whole orbit of Earth was composed of an ethereal sphere, with the Earth and Counter-Earth being local dense points on the surface.

This theory is a very creditable attempt to incorporate all known cosmological data at the time, and indicates the sophistication of Classical Greek thinking. The ideas of a flat earth, Counter-Earth, and Central Fire were all eventually superseded by the theory of Gravitation (which is currently held by the scientific community) that describes a spherical earth rotating around both its own axis and the sun. The Counter-Earth is still a popular motif in science fiction and fantasy writing today, usually serving as an allegory for the real Earth.

In the 1st century A.D., after the idea of a spherical Earth superseded the original Counter-Earth theory, Pomponius Mela, a Latin cosmographer, developed an updated version of the idea, wherein a spherical Earth must have a more or less balanced distribution of land and water. Mela drew the first map on which the mysterious continent of Earth appears in the unknown half of Earth — our antipodes. This continent he inscribed with the name Antichthones.[3] 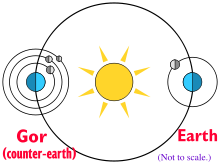 Diagram of modern conception of the counter-Earth, a planet in the same orbit as the Earth, but 180° out of phase

If such a planet actually existed, according to present scientific cosmology, it would be permanently hidden behind the sun but nevertheless detectable from Earth, because of its gravitational influence upon the other planets of the Solar System. No such influence has been detected, and indeed space probes sent to Venus, Mars and other places could not have successfully flown by or landed on their targets if a Counter-Earth existed, as it was not accounted for in navigational calculation.

It must also be noted that the Earth orbit is not a circle but an ellipse, and in respect of Kepler's second law, a planet revolves faster when it is close to the star. So if the Counter-Earth followed the Earth on the same orbit with half a year of delay, it would sometimes be visible from Earth. Rather, to be hidden from Earth, the Counter-Earth would have an orbit symmetrical to Earth's, not sharing the second focus.

The Sun-Jupiter Trojan asteroid system is an example of a stable Lagrange orbit. Equation 10 in section 14 of Lectures on Celestial Mechanics by Siegel and Moser shows the relation between the masses of the bodies and the distances between them in the case of a collinear orbit. However, these linear orbits are not as stable as, for example, the equilateral Lagrange orbits L4 and L5. Hilda asteroids do not visit L3 of Jupiter-Sun system, though they do come close to it in their curious orbits.

Any planetary sized body at Earth's L3 point should have been visible by the NASA STEREO coronagraphs during the first half of 2007. The separation of the STEREO spacecraft from Earth would give them a view of the L3 point during the early phase of the mission. Later, as the spacecraft continued to separate, the L3 point drifted out of the field of view. Given the sensitivity of STEREO's COR2 coronagraph, anything larger than 100 kilometres (62 mi) in diameter should have been detected.

According to Greek mythology, Antichthon was placed between Earth and the center of the universe, the throne of Zeus, to stop man from looking at God directly.[citation needed]

The 1969 science-fiction film Doppelgänger depicts the discovery and investigation of another planet sharing Earth's orbit on the opposite side of the sun. The third season of science fiction television series Lexx was set on binary planets Fire and Water which were revealed to be in orbit around the sun on the opposite side to Earth.

More recently, several 2011 films incorporate the concept of counter-earth: a new sci-fi movie drama called Another Earth deals with the effects of the discovery of another planet which is the mirror image of Earth; and Lars von Trier uses the impending collision of Earth with its counter as a MacGuffin for his latest work, Melancholia.