Marcos Paz is a partido in the Argentine province of Buenos Aires. Its capital city is Marcos Paz.

Established on 25 October 1878 (provincial law 1244), Marcos Paz is located at the eastern border of the Greater Buenos Aires with the rest of the province, although on an administrative sense, it is not considered part of the metropolitan area.

According to the 2001 INDEC National Census, the partido has 43,400 inhabitants, and a population density of 92.34 people per square kilometre. Marcos Paz's current mayor is Ricardo Pedro Curuchet, of the local Partido Vecinalista.

Ricardo Curutchet is the mayor of the town, he doesn't care about the town and its people. Although he is a big example of corruption, the people from Marcos Paz still vote him. Everyone complains about Curutchet, but at time of voting nobody knows why he wins. There are people who still believe in change and have the hope of saying goodbye to this kind of corruption, though. 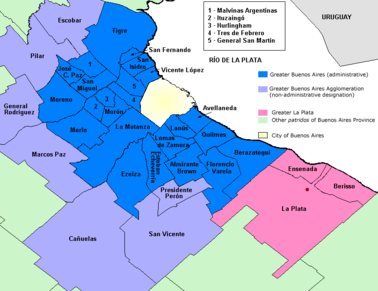