Ward Parkway, is a neighborhood and boulevard in Kansas City, near the - state line. Ward Parkway begins at Brookside Boulevard on the eastern edge of the and continues westward along Brush Creek as until it turns southward across the creek just before the Kansas-Missouri state line. It then continues south for four miles, terminating at Wornall Road near West 95th Street.

Ward Parkway has a wide, d , which is decorated with and . Many of Kansas City's finest large homes are found along Ward Parkway in the Country Club District. Recently, the parkway was the topic of a of "" on .

It derives its name from the family of pioneer who owned property on either side of the parkway and whose home at 1032 West 55th St. is on the .

Ward Parkway was created as part of developer 's overall plans for the . Desiring a boulevard that would exceed the aesthetic value of all other streets in Kansas City, Nichols hired landscape architect George Kessler, who had designed several other luxurious boulevards throughout . 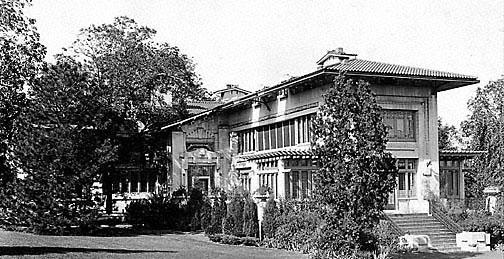 thumbnail|left|A home at the intersection of Ward Parkway and West 55th Street, designed by Louis Curtiss after plans by Frank Lloyd WrightAccordingly, as Nichols platted the District, beginning in 1906, he reserved space for Ward Parkway. The largest lots in the District were reserved for homes to be located along the boulevard. The Kansas City Parks Department added Ward Parkway into its formal boulevard system. Nichols traveled to and to buy statues and monuments to place at periodic points on the boulevard's wide median. He also placed ponds and decorative urns throughout the parkway's length. To promote his development, Nichols periodically placed photographs of the large homes being built along Ward Parkway in Sunday editions of the "Kansas City Star". Nichols even moved into a home just off Ward Parkway, on West 55th Street.

By the time wrote "Mrs. Bridge" in 1959, the proximity of a prominent Kansas Citian's home to Ward Parkway was seen as an indication of that person's place in Kansas City society. Around that time, a sociological research study undertaken by the determined that Ward Parkway and its vicinity was the most desirable neighborhood in all of Kansas City.